Artist of the Issue: Grant Litchfield ’21

Artist of the Issue: Grant Litchfield ’21 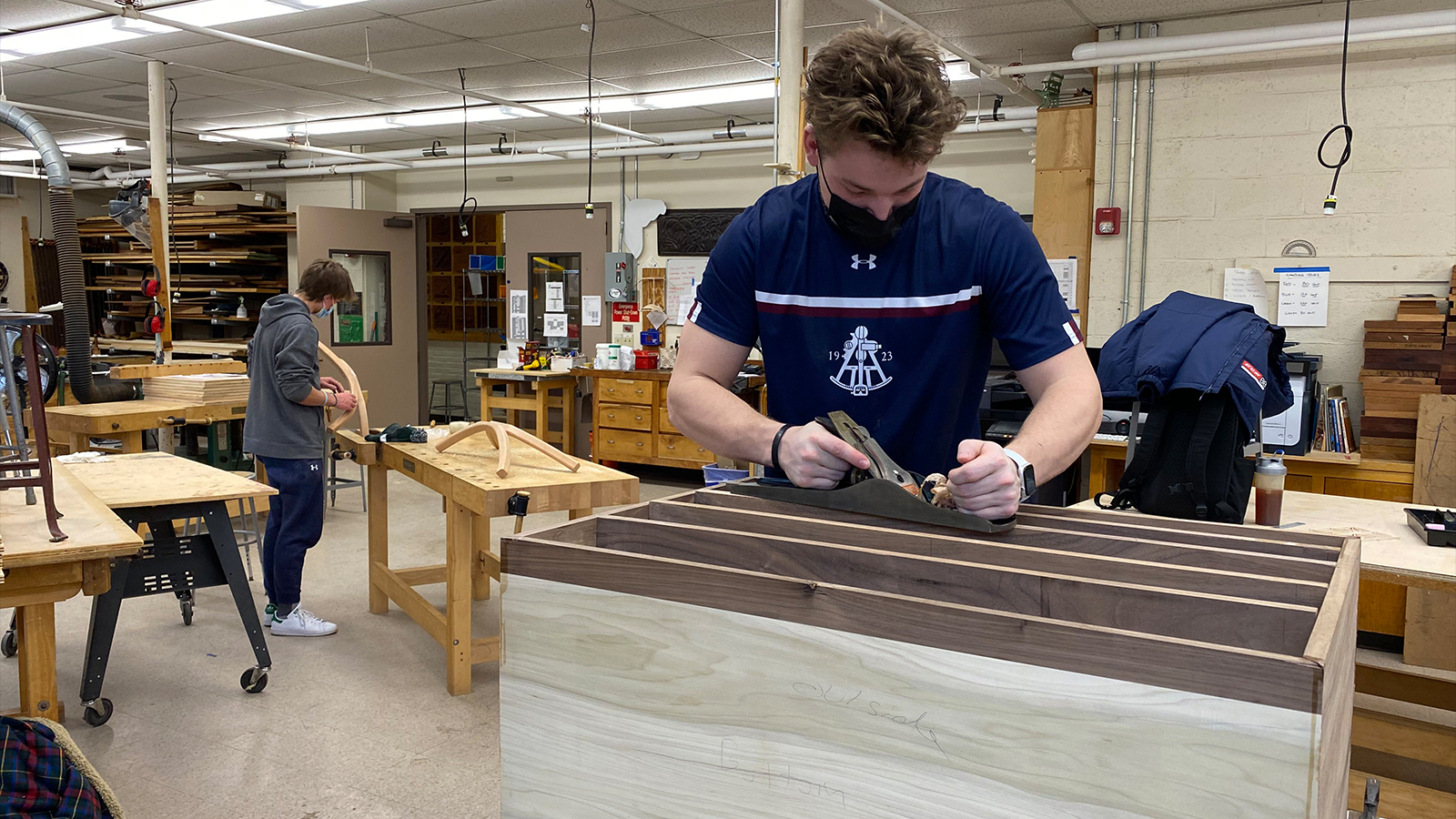 I didn’t know much about Grant Litchfield when I saw him in the woodshop at the start of the Third Form. What I did know was that he was big and liked to hit things, so I didn’t really think much of his woodworking skills. As the days passed and we began the process of creating dovetail boxes, I started to realize that I was completely right in perceiving Grant as a kid who likes to hit things. However, what I didn’t expect was how well his personality fit the process of sculpting wood. After all, woodworking is just very organized and precise hitting, so he was a natural from the start. It was nothing less than shocking to see the biggest kid in school chisel away at a dovetail joint with laser focus and graceful daintiness. Even more jarring was his choice to ignore Mr. Kaplan’s suggestions and make his box undersized; I have never seen another man go against Mr. Kaplan’s advice and make it out alive. Grant ended up winning a prize for making the best box in the class despite its ironically small size. I wanted the prize at the time, and it took many painful weeks for me to accept that his box was simply more creative and better executed than mine.

This year, Litch and I have taken on higher caliber projects as part of our woodworking independent study. I’ve witnessed a lot more of how he works over the past semester, seeing as it is only Mr. Simpson and us in the woodshop. For one thing, I’ve noticed that Litch is always in the woodshop before I am. It doesn’t matter how early in the morning or how soon after classes I get there, he’s always hunched over some part of his chest of drawers, working with a quiet intensity. I don’t know how he does it; it seems like he’s in there all day. I’ve always thought he just gets fed up with book learning during the day and decides to hit wood instead of reading textbooks in typical Litch fashion.

Much has changed since the Third Form, but Litch’s supremacy in the woodshop certainly has not. A combination of his natural creativity and highly developed skills, gained through years of woodworking at Belmont Hill, makes him fluent in the woodshop. His talents don’t go unnoticed; as Mr. Simpson put it, “Grant is a very talented woodworking student, owing in part to his creative puzzle-solving skills. One such example is how he employed his knowledge of thermodynamics to heat his breakfast sandwiches in the steam generator that is used for bending wood.” This is high praise coming from a professional woodworker.

Grant seems to relate to the wood, and at times it’s like he is one with the wood. In many ways, Litch is like the trees that he molds. He’s built like a tree trunk in the best way possible; he is solid and rooted in the ground. Litch is quietly intense, steady, and careful–all qualities reminiscent of a tree. It seems like Grant Litchfield was born to work with wood. It’s easy to envision him as a lumberjack and a woodworker in the future, felling, and milling and sculpting as he brings his ideas to life.