Athlete of The Issue: Jack Albers ’22

Athlete of The Issue: Jack Albers ’22 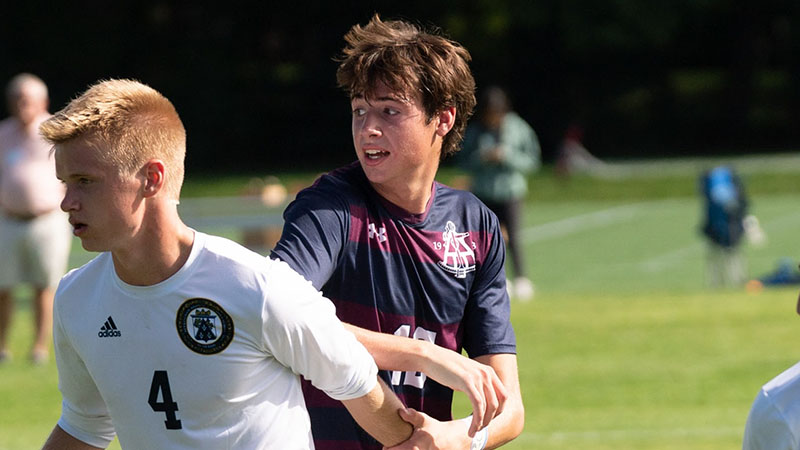 Jack Albers ‘22, starting forward for the varsity soccer team, began playing soccer when he was four years old at the YMCA in Needham. He was first introduced to the sport by his dad, who played a lot of soccer as a kid. After playing through elementary school, Jack continued his career when he came to Belmont Hill in Form I. He made the varsity team during the fall of 2020, when the team had to wear masks while playing, conform to irritating new rules, and only played a total of four games. Jack was especially upset with the new rules because he was not allowed to head the ball, there were no throw-ins, and there were no corner kicks. He said, “It felt like we weren’t playing for anything.”

Jack is loving the 2021 season and doing exceptionally well. As of October 9th, Jack is 3rd in the ISL for points, scoring 3 goals and racking up 4 assists through 4 games. When reflecting on role models at Belmont Hill, Jack explained that “Coach Fritz and Coach Schneider were great for me.” Being on 3A and JVA significantly improved Jack’s skills, and he attributes his current success to his past coaches. When asked what his goals for the soccer season this year were, he explained, “I hope we can finish top five in the ISL, beat Sebs, and [that I] keep scoring to help us win more games.” Jack also left a message for all the younger students at BH: “Keep up the grind even if you didn’t make the team as a freshman or sophomore. You’ll get your chance if you stick with it.” Jack is a great role model for younger kids because he is patient and works hard; now that he has his chance to play, he is taking full advantage of it. The Panel wishes Jack and the varsity soccer team good luck in the rest of their games.