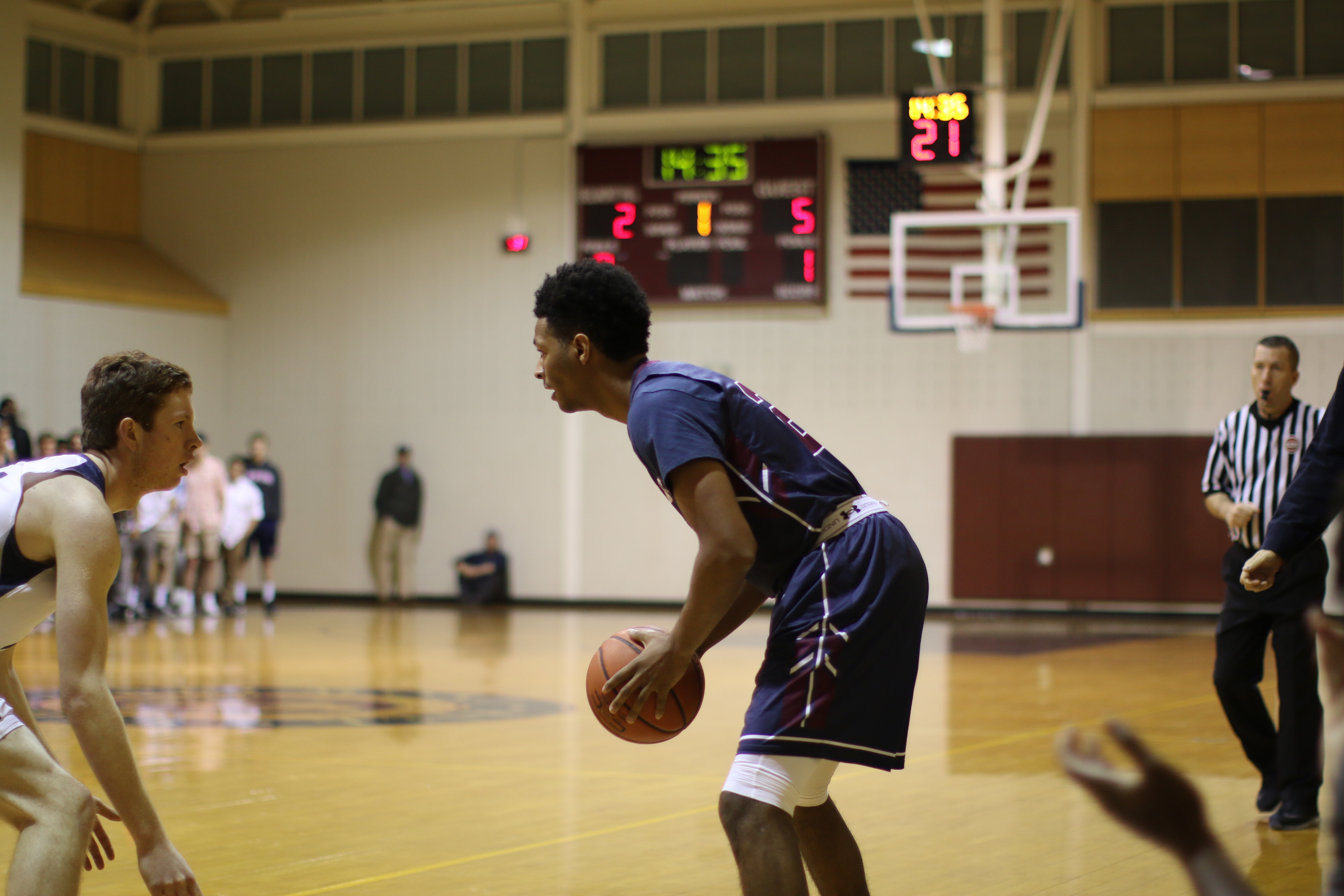 As with any away game the Varsity Basketball team has played this season, a standard Belmont Hill Bedford Charter bus dropped off fourteen excited players, a coaching staff of four, and a corps of managers outside a gym. Players transported jerseys and shoes in bags, Coach Murphy slung a backpack with two whiteboards over one shoulder, and everyone hustled water bottles, basketballs, medical kits, and towels down the bus’s steps and onto the asphalt below. Neon signs spelling out the game’s special venue, TD Garden, however, served as indisputable reminders that the evening was unique. “Play like us,” Coach Murphy had reminded the team a day earlier, as a game against St. Sebastian’s—an ISL game, a NEPSAC Class A competition, and a rivalry matchup—was simply another opportunity to win. The evening was both routine and extraordinary.

Players, coaches, and managers, VIP lanyards draped around their necks, progressed through a maze of elevators, hallways, and special entrances. The team walked among pictures of Boston legends, players like Paul Pierce and Bobby Orr plastered into hallway walls, eventually settling in at a locker room reserved for Belmont Hill use.

As players changed, stretched, and loosened up, parents, students, and alumni filed into the Garden’s Legends Club. Earlier that week, The Panel had partnered with Belmont Hill’s Digital Video Club to record footage of the team, and the hype video Quin McGaugh ‘18, Bennett Morris ‘18, and Seth Israel ‘18 produced shocked both players and fans.

“Playing at TD Garden was sensational,” co-captain David Mitchell ‘18 recalls. “The entire experience—just walking through the arena and especially the video on the huge screens in Legends—made it as fun as I could have imagined.”

The 68-second production played on loop while fans migrated to the stands and players took to the court for warm-ups, but as guard Spenser Smith ‘18 relates, “at the end of the day, we needed to win that game, so when the first whistle blew, we had to play basketball and forget about all the distractions,” a long list that included the video, announcers, bright screens, parquet flooring, and two electrified fan sections.

After Seb’s took an early lead, Jovan Jones ‘18, cleared to play just hours before tipoff after recovering from a rib injury sustained against Lawrence the weekend before, ignited Belmont Hill’s response with an NBA-range three-pointer. Enjoying contributions from essentially everyone on the roster, Belmont Hill still emerged with a 56-42 advantage, winning a game that was more competitive than most expected. Despite being restricted by four questionable foul calls, Mitchell shot over 60% from the field; Kevin Michael O’Boy ‘19 hit a big three from the corner; Smith forced a game-high five turnovers; Mannion ‘18 led the team with seven rebounds; and Isaiah Collins ‘18 drilled a late-game three, adding an exclamation point to a successful night.

While a 74-35 thrashing of St. Mark’s would officially end the team’s January slate, the win over Seb’s at TD Garden presented an important checkpoint for a season that has flown by. A legendary performance from Milton Academy’s Cormac Ryan, committed to Stanford and the gold standard of New England basketball, accounted for Belmont Hill’s first loss early in the month. Ryan shot 8 of 13 from beyond the arc, hitting almost any attempt during which Milton had more than three seconds on the shot clock and Ryan stood within three feet beyond the line.

“We didn’t have the energy we needed to win against Milton,” Smith told The Panel. “It showed in the result.”

Milton would end up losing to Rivers the Wednesday after their win at Belmont Hill, placing Rivers, BH, and Milton on an equal playing field with one league loss apiece. Rebounding from their first loss with wins over Groton, BB&N, and Lawrence Academy, the team regained their “play hard, play fast, play defense” brand, according to Mitchell.

“We found our identity as a team,” guard Luke Jordan ‘18 says. Especially at Lawrence, Belmont Hill exhibited the fast-break opportunities an effective defense can create. Pressuring Lawrence with a full-court press for the entire game, the team accumulated 14 steals, 17 deflections, and ten forced turnovers in the first half, translating to a 40-18 lead at halftime.

A less prolific second half allowed Lawrence to decrease the deficit, and while hustling for a loose ball after the break, Jovan Jones ‘18 injured a rib, straining his sternum. Though he would continue play at Lawrence, his absence in the team’s next game against Phillips Exeter would be significant. Jones had played in 82 consecutive games in his four-year BH career before missing the Exeter game. Belmont Hill would eventually lose 49-44, having struggled to capitalize on offensive possessions in the second half.

February’s first competition, last Friday’s away game against Roxbury Latin, included two other key absences. David Mitchell ‘18 missed the game because of a family emergency and bed-ridden O’Boy ‘19 was scratched from the lineup with the flu. As with games against Milton and Exeter, adversity tested the team’s resolve and focus. After a successful start to the game, Belmont Hill lost their lead by halftime. Down by six points with less than six minutes to go, the team relied on strong play from experienced seniors Haase ‘18, Smith ‘18, Bobo ‘18, Harris ‘18, Mannion ‘18, Jordan ‘18, and especially Jovan Jones ‘18, who finished the game with 27 points, 9 rebounds, four blocks, and a pivotal forced turnover in the final minute.

Luke Jordan explained, “the RL game proved that we don’t get fazed easily. With David and Kmo out, we embraced our next-man-up philosophy.” Belmont Hill would win 52-48.

“With seniors who have played together for so many years, we were able to pull it out. It’s the type of win we wouldn’t have captured two years ago,” says Jake Haase ‘18.

Roxbury Latin’s close call also reminded everyone that the month ahead will be challenging. Tomorrow’s game at Thayer, next Wednesday’s game against ISL powerhouse Brooks (who defeated Milton by 14 on Saturday), and the team’s final ISL matchup against Governor’s will be crucial if the program’s hopes for an ISL title and NEPSAC Class A championship are to be realized.

Players emphasize focus, confidence, and self-awareness  as the season expires and many of their Belmont Hill basketball careers conclude. “Since this is our final season together,” Mitchell stated, “we want to be successful and that sense of urgency is definitely there. If we stick together and stay true to our defensive game, we will be happy with our results.”

“We know what we’re capable of doing and have a real shot at the title,” Smith believes, “but the greatest obstacle we face is ourselves. If we play our brand of basketball, no one can beat us.”

Haase adds that “we only worry about ourselves and what we need to do every practice. We never talk about who we are playing, and it starts with our defense.” Concentrated on their game’s guiding principles, Haase and O’Boy, who “feel confident going into the final stretch,” capture an inherent optimism this group shares about the upcoming month. Attaining two championships will not be easy, but this group–experienced, focused, ambitious, and talented–may just make it happen.