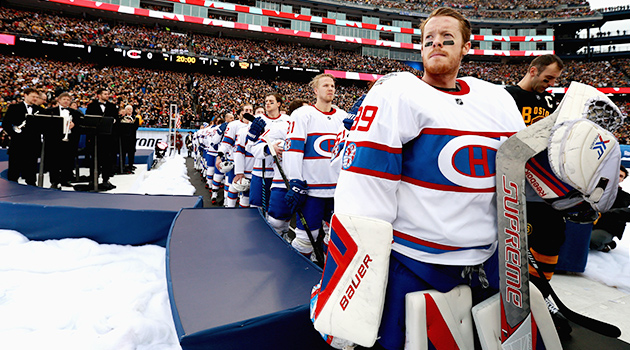 The Belmont Hill hockey program is widely regarded as one of the most respected programs in New England, and it is only fitting that a program of this nature is well represented in the NHL, with 12 former student-athletes turning pro. Of these twelve, four currently have a spot on active NHL rosters; Connor Brickley, Matt Grzelcyk, Jimmy Vesey and Mike Condon.

Connor Brickley left Belmont Hill in 2009 to play for the United States National Team Development Program (NTDP) until he was drafted in the second round by the Florida Panthers in 2010. He would then go on to play four seasons at the University of Vermont where he was the assistant captain his junior year. After graduating from UVM, he played for the AHL affiliate of the Panthers, the San Antonio Rampage, until 2015, when was called up to the Panthers and appeared in 23 games. But the next season he was traded to the Hurricanes, where he played all his games in the AHL for the Charlotte Checkers. Following the 2016-2017 season he would be drafted in the NHL expansion draft by the Las Vegas Golden Knights, but appeared in no games for the new franchise, and resigned with the Florida Panthers, appearing in 36 games and scoring 4 goals and 8 assists.

Mike Condon, 2009 graduate of Belmont Hill, would play four years at Princeton, before signing with the Minnesota Wild AHL affiliate, the Houston Aeros, in 2012. A year later, he signed with the Montreal Canadiens, and spent the next two seasons playing for their minor league affiliates, the Hamilton Bulldogs and Wheeling Nailers. But in the 2015-2016 season, with an injury to star goaltender Carey Price, Condon appeared in 55 games, including a memorable 5-1 victory over the Bruins in the Winter classic. He would then be claimed off of waivers by the Pittsburgh Penguins in 2016 where he appeared in just one period, and was then traded to the Ottawa Senators, where he plays now, backing up Craig Anderson, and appearing in 17 games, starting in 14 of them, with a 3-7-4 record.

Matt Grzelcyk left Belmont Hill in 2010 for the NTPD where he would play for 2 years, followed by a four year career at Boston University where he was captain for his Junior and Senior years, twice representing the United States at the World Juniors. He would be drafted in 2012 by the Bruins in the third round, and in the 2016-2017 season he made his debut for the club, playing mostly in the AHL for the Providence Bruins, but also playing two NHL games. This season he has played in 29 games for the Bruins, scoring once with five assists.

Lastly, Jimmy Vesey, the player who has perhaps seen the most success, left Belmont Hill in 2011 to play junior hockey for the South Shore Kings, and the next season would debut for Harvard, as well as play for the United States in the World Junior Classic. He played four seasons at Harvard, winning the Hobey Baker award as the country’s top collegiate player in 2016. Although he was drafted by the Predators in 2012, he didn’t end up signing with them following his senior year in 2016 and wound up being traded to the Buffalo Sabres, who also couldn’t reach a deal with him. Vesey would end up signing with the New York Rangers, and in his rookie campaign he played in all but two games, scoring 16 goals and ll assists. This year, Vesey has 10 goals and 7 assists in 50 games.