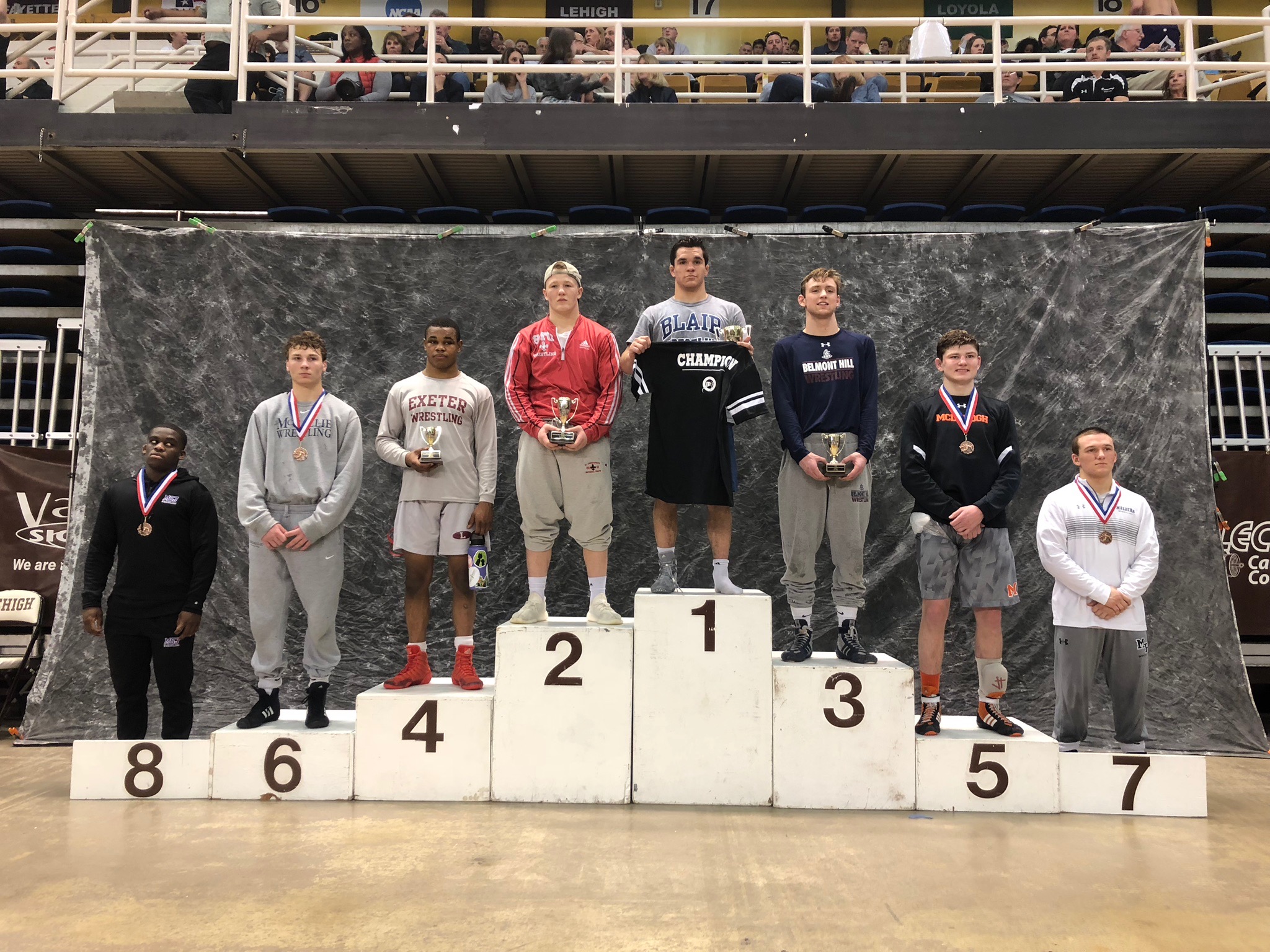 The Belmont Hill Varsity Wrestling team has capped off yet another astounding season. In the past fourteen years, Belmont Hill wrestling has accumulated 11 Graves-Kelsey awards and four NEISWA titles. As of a few weeks ago, the 2017-2018 team added three more trophies to the ever-expanding Belmont Hill trophy case.

In the Graves-Kelsey tournament, Belmont Hill, undefeated in league matches, was favored heavily, with six first seed wrestlers. Their performance on Saturday, February 10 at Tabor Academy not only met but also exceeded expectations. After racking up pin after pin in the tournament’s opening rounds, by the semi-finals, ten BH wrestlers remained in the championship brackets of their respective weight classes. Impressively, all ten moved on to the championship finals, including fourth seed Mike Wade ‘19, who upset a number-one-seeded Roxbury Latin wrestler in a barn-burner overtime match. In the finals, seven out of ten of the Belmont Hill wrestlers would claim first place, some by dominant leads, such as captain Seth Israel ‘18, who pinned his BB&N opponent in a mere two minutes and thirty-three seconds, and others by the narrowest of margins, such as Matt Smith ‘19, who eked out a 6-4 win. At the end of the day, Belmont Hill’s numerous victories earned them a well-deserved league championship title in addition to the dual meet title for their 10-0 ISL record. Notably, Will Misciagna ‘18  and captain Phil Conigliaro ‘18 were also individually awarded trophies for, respectively, the most pins in the least time and outstanding wrestler. Results from the Graves-Kelsey Tournament are posted below and footage can be found here.

On Friday, February 16th, Belmont Hill bused back to Tabor to continue their streak of dominance in the New England Independent School Wrestling Association (NEISWA) tournament. Although in close contest with Brunswick, Exeter, and Northfield Mount Hermon, the only team to which Belmont Hill lost, they appeared to again be poised for victory. After the first day of wrestling, BH emerged in the lead by the narrowest of margins, only a few points, and with nine wrestlers out of eleven wrestlers still in the championship bouts. On day two, Belmont Hill significantly increased their lead and cemented their win. After sending three wrestlers, captain Luca Pontone ‘19, Phil Conigliaro, and Seth Israel to the finals, and seven others to the third, fifth, and seventh place matches, the team finished the tournament with two champions, Phil and Luca, and 187 points, 17 ahead of second place finisher Brunswick. In addition to a team trophy, Phil was also awarded a trophy as the outstanding wrestler of the tournament; his NEISWA victory marked his fourth, a remarkable feat achieved by only four wrestlers ever, including Jeff Ott ‘12 from Belmont Hill. Results from the NEISWA tournament can be found below.

By placing sixth or higher in the NEISWA tournament, nine BH wrestlers qualified for the Prep Nationals tournament. On Thursday, February 22nd, these wrestlers, along with coaches Bradley, Leonardis, and Kaplan, made the long trek to Lehigh University in Bethlehem, Pennsylvania to compete with the best in country and even the world, including Mr. Leonardis’ alma mater and top-ranked school, Blair Academy, and two-time Cadet World Champion Kury McHenry. After skin checks on the day prior and successful weigh-ins that morning, Belmont Hill’s best wrestled for All-American status on Friday, February 23rd. Although many won tough matches, only Luca and Phil, seeded sixth and second, made it to day two with victories in the quarterfinals. On the second day, sadly, both BH wrestlers were defeated in the semifinals, Luca by the second seed from St. Christopher’s and Phil by the third seed from Baylor, in a crushing overtime upset. More unfortunately, Phil sustained injuries from his match and was unable to continue wrestling in the tournament. The nature of his injuries are still unknown, but Belmont Hill’s thoughts and wishes go out to the former national champion. On a positive note, Luca would wrestle back in consolations to claim third, beating Exeter wrestler and seventh seed Nasir Grissom, whom he had already wrestled two times before, including in the NEISWA finals, with a score of 5-4. At the end of the tournament, the Belmont Hill wrestling team finished 16th, just behind their rivals NMH, who also placed two All-Americans.

As the winter sports season wraps up, the Belmont Hill wrestling team bids farewell to its starting seniors, Phil Conigliaro, Will Misciagna, and Seth Israel, as well as longtime wrestlers Ishaan Prasad, Billy Weldon, Myron Duarte, and Macdony Charles. Optimistic about the future, the team hopes to pick up more titles next year and in the years to follow.