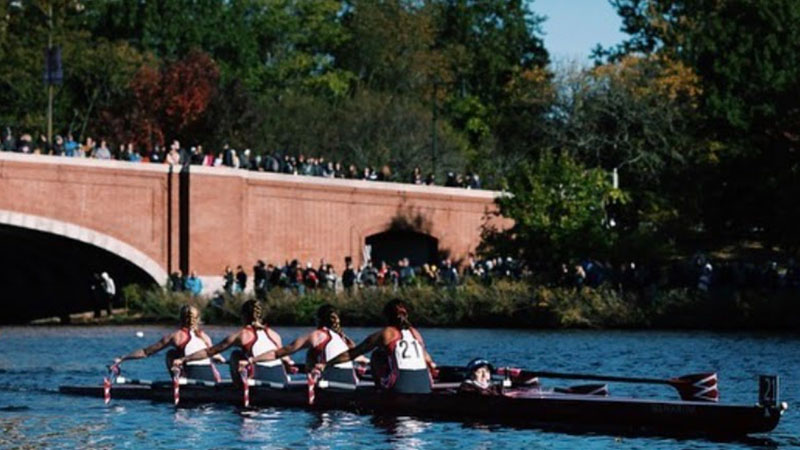 The Belmont Hill (BH) and Winsor crew teams share a boathouse on the Charles River in Cambridge next to BB&N and the Eliot Bridge. Since Belmont Hill and Winsor generally do not practice at the same time due to scheduling differences, the teams rarely have any time to interact with one another, except on race days, or occasionally when their practices just happen to line up. Therefore, despite the title of this article, “buddies” may be an exaggeration. Rowing is a very difficult and time consuming sport. It requires optimal fitness, focus, and determination, leaving little time to socialize. As a result, even when both teams are at the boathouse together, they are more focused on getting on the water and prepping for regattas rather than socializing.

Since Winsor offers crew in the fall and spring while Belmont Hill only rows in the spring, for much of the year, Winsor is the only crew rowing out of the boathouse. Amory Gordon ’23, a rower on the Winsor coxed quad, explains, “we never really see the BH athletes. Both teams are highly focused on their sport and bringing their best selves to every practice.” Belmont Hill rowers are sure to see signs of life over on the Winsor bay, whether they want extra Head of the Charles (HOCR) practice in the four plus, or they are preparing for a race on the Powerhouse in the spring.

A rower on the Winsor coxed four, Coco FitzMaurice ’23, said that while the BH athletes usually go MIA, she “can always rely on Tiberius to show up.” Both Winsor and Belmont Hill have a “boathouse dog.” Coach Stone (Winsor) never forgets to bring her pitbull Hank on the launch, while Coach Richards (BH) always lets his own Bernese mountain dog Tiberius wander around the boathouse. Winsor rowers truly love seeing Tiberius at the boathouse; in fact, BH can usually find them doing circuit training around him.

Frequently, schools with both boys and girls crew teams will bring both of their teams down on the same weekend to race both schools at once. Then, both crew teams in the Winsor-Belmont Hill boathouse will unite against whichever New England Interscholastic Regatta Association (NEIRA) school thinks that they can defeat us. Both crews share our victories.

On the other hand, the tensions grow, especially in regards to the order of launching boats. Everyone is focused on getting out on the water as quickly as possible so when both crews have to share the dock, delays are inevitable.

With so much focus and diligence exerted from both teams, rivalries are inevitable. However, while tensions can get very high on the dock, the two teams are also, usually, very supportive of one another. This camaraderie was most evident during HOCR, where rowers, alums, and parents of both BH and Winsor students came to cheer on their teammates. Austin Forrester ’23, a rower on the Winsor coxed quad, said that “it was nice seeing Belmont Hill come to cheer us on. We miss seeing them in the fall season.” Some of the Belmont Hill rowers showed up early to see the Winsor boats race in the morning and cheer them on. Charles Geddes ’22, a rower on the BH coxed four, noted that “seeing Winsor row is always fun as we always see them practice but never see them race.” While BH and Winsor share moments of both camaraderie and tension, in the spring, the two teams will hopefully be able to interact more and truly become “buddies.”