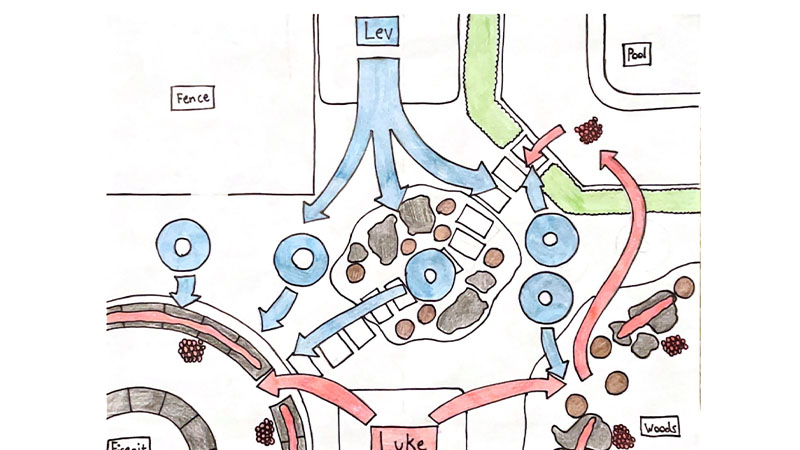 For this Debate of the Issue, we decided to try something a little different. Instead of the normal argument, we will face off against each other in a classic backyard snowball fight. The rules are simple: Each person starts off from one place in the yard and can claim corners in order to build a fort and attack. In addition to the team leaders, there will be four clones of that person to help them out with construction and fighting. Each team will receive two regular snow shovels as well as two plastic snowball makers. Finally, both sides will have to place three flags within their forts. Once all six flags are collected by one team, that team wins. There will be thirty minutes of preparation time and the fight will end once all flags have been captured

Starting at the top gives me the advantage, to be aggressive. Knowing that Luke will try to be passive I set up my defensive igloo in the center, shielding me from all sides, but with an opening from the top. Each of my clones do the same thing, essentially dividing the battle field in two. I know if it is close combat it is a certain victory for me, having the advantage by having the better arm in this battle. With my igloos, there is only one possible disadvantage, that if surrounded I would have to fight from both sides.To account for this I will instead stack the igloos, one on the left with one behind it and the same on the right. The front two igloos will have the shovels to act as shields for themselves and the igloo behind it. While the back two igloos will have the snow ball machines, with a constant aerial of snowballs, victory is imminent.

The goal is to whittle down the front defenses of Luke and to then create a semi circle of igloos around Luke, effectively winning the battle. Pushing down the battle line from side to side is key so as to not let the igloos be surrounded.

The attack strategy is simple: a constant aerial of snowballs from the back two igloos, will prevent Luke from moving beyond his two areas. With no access to communication or resources, it is essentially a four versus two. All that is necessary is to be both at different times. Estimated win time is approximately ten minutes, I think Luke will put up a decent fight, but being too passive will not fare well against my belligerent attack.

By starting from the bottom, I am happy with the stone wall to my left. Its uniformity will allow for a quicker construction since the stone wall is already in place. To the right, the rocks and trees will offer some protection; however, because they are inconsistent, it may be harder to set up a solid base. The middle looks promising, but its main use would be to make an attack, and so I’m going to leave it for now. Two clones along with myself will make for the stone wall, which we will set up to be our main base. The other two will be sent to the forest corner, so that we still have some control over it. Each group will take one shovel and one snowball maker.

Once our corners have been acquired, the fort building process will begin immediately, since we only have thirty minutes. To start off, we can pack the snow to create the walls on top of the stone wall and in between the rocks. Splitting up our fort will allow us to retreat back to one if the other gets taken over. To make it easier, a path will be set up between the forts by digging up the snow and placing it next to it. Finally, handmade snowballs as well as ones made from the snowball makers will be made and stockpiles will be created in both forts, as once fighting ensues it will be hard to replace them fast enough.

The first move I would like to make would be to push two clones up to the top left, as I believe Lev will leave it the more unfortified of the two due to the hedges. Remaining at the firepit fort with one of the clones and a snowball maker, I send another over to the forest fort, leaving it least fortified due its distance. In case of emergency, the two clones at the hedge fort can retreat back. At the hedge fort, I don’t plan on making any serious fortifications as the bushes can’t support much and we won’t be there for long.

Feeling pressure from both sides, I hope Lev will push to the middle as it is the only open space remaining. If he does, I can easily take him out by pelting him from three sides. If he doesn’t, and decides to hunker down, we can then send in a charge from the top right and bottom left corners and pummel his defenses with an onslaught of snowballs. Finally, if Lev chooses to be aggressive, which I see as the most realistic option, I still have a defense plan in mind. To whichever fort he attacks, the defenders in that area hold up a pseudo-defense. Then, similar to a screen pass, once Lev and his group pursue my retreating members, I will send in my other three members to come forward guns-blazing and surprise his attacking force. Then the rest of my team can turn around and we can easily wallop Lev and his team while they are on their heels.

Who do you think would win? Share your answer here: https://forms.gle/rYmLvRMY5ajRnVGg9