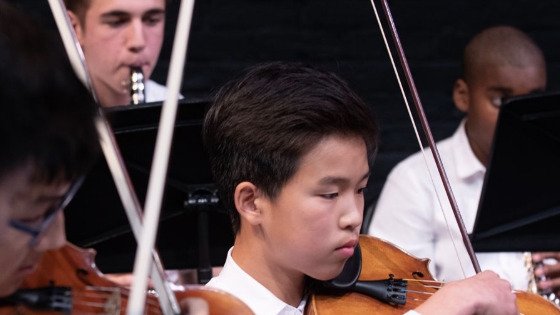 This year’s Fall Concert was the first of its kind and an excellent kick-off to the Thanksgiving holiday. Previously, there had been a fall recital and a winter concert. However, this year, the music department combined the two.

The middle school jazz ensemble started with a banger from Stevie Wonder, famously known as “Superstition.” There were terrific solos from Daniel Xie ‘24 on the alto saxophone, John Mazur ‘25 on trumpet, Derrick Huang ‘25 on the tenor saxophone, TJ Cannistrarlo ‘24 on the bass. After the middle school jazz ensemble, the jazz combo took the stage. The quartet plus Mr. Fiori on the drums played the classic “Take the ‘A’ Train.” Of note included the rarity of vocals, pronounced exquisitely by Jacob Czarnecki ‘22.

Next, the upper school jazz ensemble performed their four pieces, which featured, in total, a solo from every member. Unfortunately, president Artemy Ivanov was visiting a college. Nevertheless, in his absence, one of the private music lesson teachers rose to the occasion and, in his endeavor, crafted a beautiful solo that resonated with all the audience members.

The B-Flats followed the fantastic performance and sang wonderfully, adding their usual flair. They sang four songs, two of which featured members of the upper school jazz ensemble. The other two songs were acapella; the last one featured Head of School Mr. Schnieder, who, over the summer, recommended the song to be performed at a chapel. In solos, he sang the verses of what is often known as the second Canadian national anthem, “Northwest Passage,” while the Flats accompanied him. Lastly,  the all-school orchestra played three songs, ranging from the Beatles to Harry Potter.

All in all, it was a gratifying experience filled with loads of talented musicians and their beautiful music. Everyone should come out to see these groups play this February again.