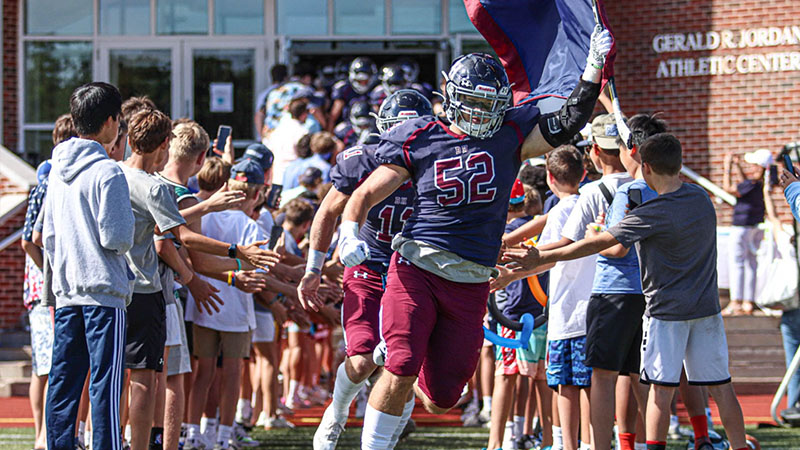 After a two year hiatus, Belmont Hill football is back in full swing. Many people wanted to once again see a packed Homecoming and that beautiful Saturday afternoon did not disappoint, despite the heart-breaking loss. After two scrimmages, against Middlesex and Avon Old Farms, as well as three games against Lawrence Academy, Roxbury Latin and Tabor, the team is ready to press on against BB&N, on October 16th.

Because of the loss of a season last year, most of the players are new to the sport. Many players who didn’t get to experience a real game last year will play their first snaps. Furthermore, with the addition of Offensive Coordinator Coach Rosser, who joined last year, an inventive new playbook has been added, so everyone will get a fresh start. Regardless, Head Coach Butler sees the team as “competitive, tough and resilient” and looks forward to seeing their growth over the rest of the season. A big focus for the team this year is a “We vs. Me” mentality and that the whole team is one big family that supports one another.

Led by captains Mike Ahonen ‘22, Nolan Parchesky ‘22 and Harry Lodge ‘22, the team hopes to come out swinging against BB&N next week, after a rocky start to the season. The first scrimmage against Middlesex was unconventional with respect to a typical game. At first, the O-line and skill guys were separated to work on their positional skills. Then, the teams came together for a few 11-on-11 snaps. The game was an eye-opener: the team executed but there was much room for improvement, as with any new team. Next on the schedule was Avon Old Farms, located in Connecticut. More traditional, yet still not complete, the varsity team played the first half and the younger guys the second. Although a formidable opponent, this game was good preparation for the season ahead.

By the end of the preseason, the team was itching to go. After an inspiring pump-up speech, the team poured out of the Jordan, through the tunnel and onto the field. The battle against Lawrence Academy was a tough one. Led by the captains as well as quarterback Chris Milmoe ‘23, the offense fought down the field to score two touchdowns in regular time. The defense battled too, holding the opponents to an equal two touchdowns. In overtime, the game came down to a nail-biter but Lawrence Academy came out on top, 21-22. Next up was Roxbury Latin, a rival and a favourite to play each year. The team may have been a bit too confident to start the game, as the overall performance was not their best. However, after an electric kick return touchdown by Charlie Walsh ‘24 to start the second half, Belmont Hill was able to rebound and secure a 21-14 win. Most recently, the troops faced off against Tabor. The opponents came out tough and had them on their heels. But Belmont Hill was able to push back, with 4 forced turnovers, three being interceptions by Captain Mike Ahonen ‘22. Even with a strong final drive, Belmont Hill was defeated for the second time this season, 20-9.

Despite these losses, the team still has a win under their belt. Coming off of the break of a long weekend, Belmont Hill hopes to restore its morale this week through focused practices and prove itself against BB&N. Regardless of what’s happened, or what might happen, the team is not looking down, and looks forward to a great stretch of the season.