From the Archives: BH Dining Hall

From the Archives: BH Dining Hall 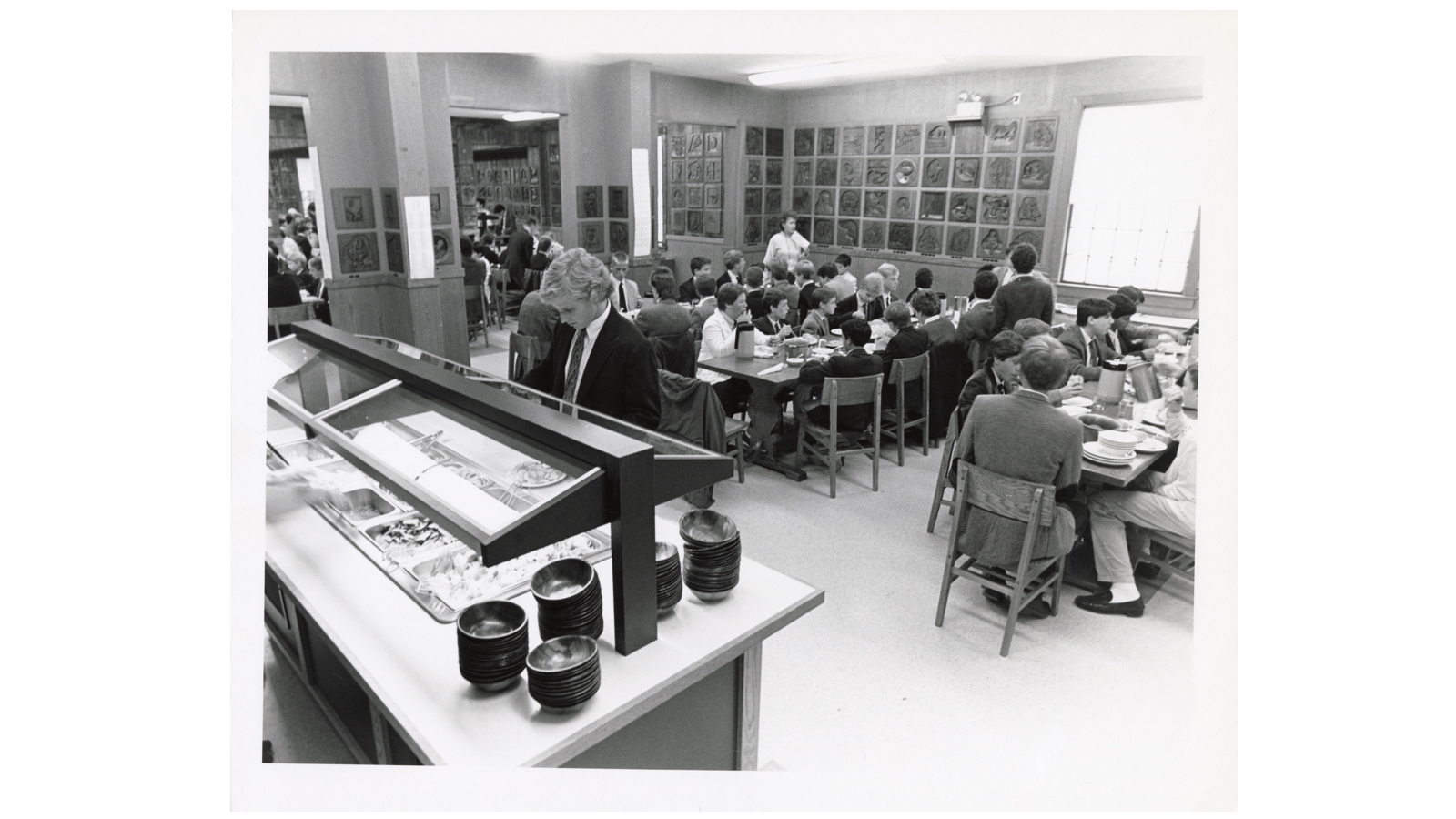 Perhaps the most miraculous space on campus, the dining hall, achieve a seemingly impossible feat on a daily basis, feeding the hundreds of people of the Belmont Hill Community. Its central location proves the importance of its duty to the school, but what is the history of this space which many look upon with eyes of change?

The first appearance in the archives of the Dining Hall is in a 1966 publication of the Alumni Bulletin. In the article, then Headmaster Charles Hamilton updates the school community of the exciting modernization of the Shaler House and specifically the kitchen and dining hall spaces. He writes: “[t]oday we have a modern institutional kitchen completely equipped [and] considerably enlarged.” What is more interesting than the description of the new space is the sharp criticism of the old. Hamilton began his essay remarking on the “antiquated old kitchen with obsolete equipment” which served “this many people in two sittings in a terribly overcrowded dining room.” For those who have perused the current Dining Hall, these two descriptions, antiquated old kitchen and overcrowded dining room are relevant once more.

Most interestingly, Belmont Hill’s accrediting body in 1966 had “privately acknowledged that… these conditions were disgraceful and marveled at the minor miracle that was being accomplished under the circumstances.” Once more, simple parallels can be drawn between the culinary feats accomplished by the current dining staff and those in 1966. Even more impressive is the similarity in style between the Dining Hall Hamilton introduced and the one we now eat in: the resemblance is uncanny for the fifty-four years that separate the two spaces.

While the Dining Hall received minor updates in 1987 with the addition of the Lynch Center and Byrnes Library, it was not until the summer of 2018 that significant changes were made. Most older boys will remember the transformation of the space over that summer and the surprise of the new arrangement upon returning to school in late August. Furthermore, reactions to the updates mimicked the words of Hamilton in 1966, with specific emphasis placed on the modernity of the architecture and ingenuity of the design. However, while a matter of decades separated prior reconstruction efforts, the school now finds itself once again constricted by the space only a matter of months later.

While rumors of renovation and innovation echo throughout the student body, many boys look to Headmaster Schneider with hopes for an improved dining experience and updated atmosphere. In response, Mr. Schneider cordially comments that the Board of Trustees is “beginning to contemplate a broader campus planning process.” Furthermore, they “expect one of the key priorities in that process will be consideration of the dining hall at Belmont Hill.” It remains clear that Belmont Hill is an evolving place and that younger students will certainly be involved in the transformation process as we look forward.