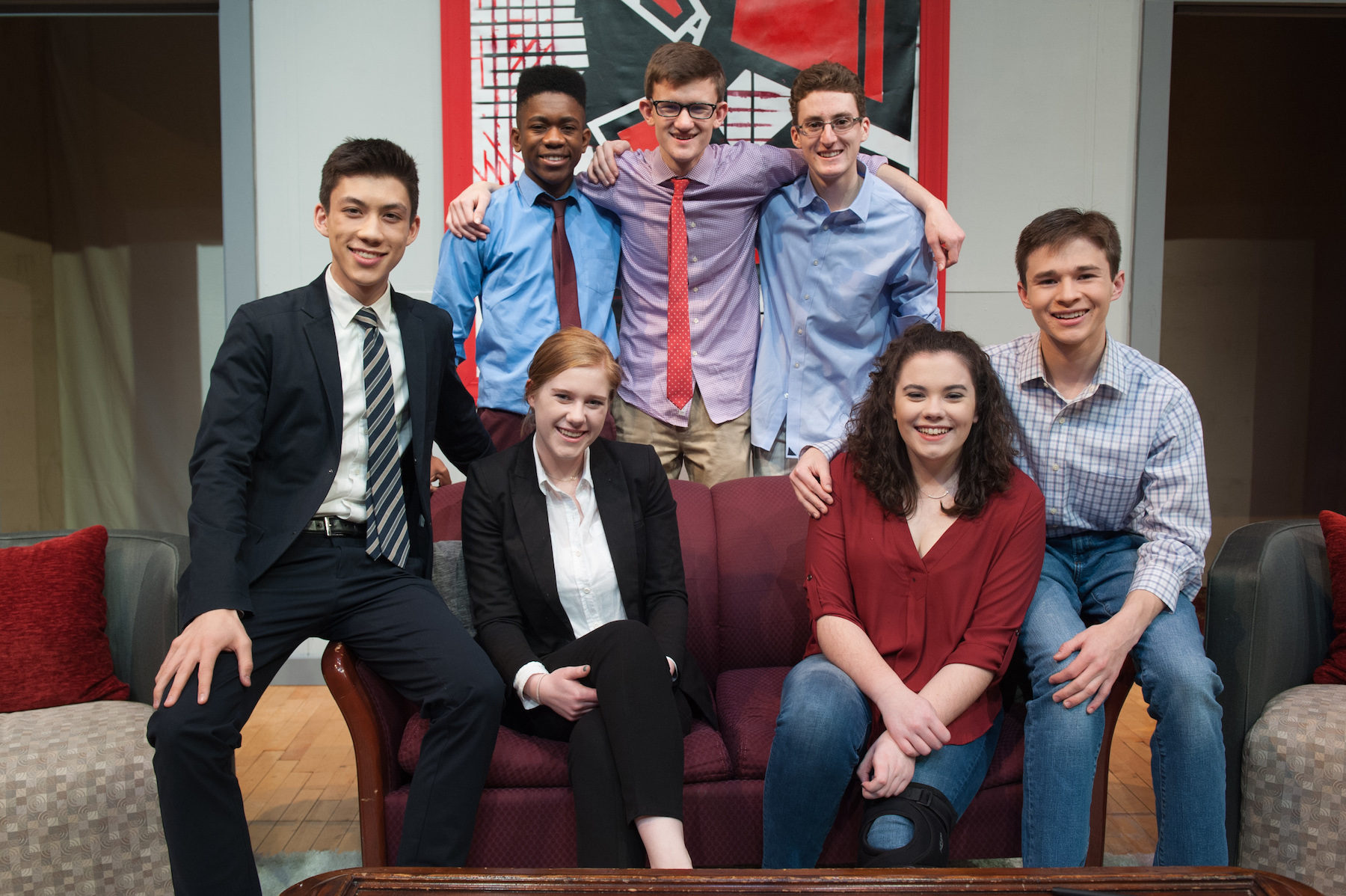 With vomit on the Kokoschka, the smell of rum in the air, and tulips strewn across the room, the final image of Yasmine Reza’s God of Carnage is a sight to behold.  The senior-directed play – directed by Owen Pickette – was the last Belmont Hill show for both Theo Why and Henry Vettel, and they went out with a bang, to say the least.  Belmont Hill packed the Kraft on March 1st (an open dress rehearsal), March 2nd, and March 3rd to watch Annette and Alan Raleigh and Michael and Veronica Novak devolve from civility into neanderthalism and accusations of rodent-slaughter.  Each of the four characters soliloquized masterfully as they vacillated from teams of husband and wife to teams of man and woman before each finally arriving at a separate corner of the stage with the jarring conclusion that they were alone.  Dana  Hall actress Katie Gardner’s visceral emotional performance as Veronica Novak held the audience rapt, while Vettel’s agitated, wild-eyed performance as her husband stole the show.  Loulou Taylor’s, also a product of Dana Hall and who portrayed Annette Raleigh, explosive transformation from a demure problem-solver to a furious tulip-hurler and attempted-alcohol-thief shocked the audience; Alan Raleigh (Why) fueled the fire with an effortless acted complacency and who reveled in the glow of being detestable. The two couples, who met to discuss a fight between their children, turned on one another with incredible enthusiasm and created a fascinatingly tense, toxic set; they couldn’t have captured the ambiance of God of Carnage any better.

With vomit at three in the morning, the smell of Pepto Bismol in the air, and three of the four co-stars bedridden with two stomach bugs and a dislocated knee mere days or even hours before curtain on Friday night, it’s a miracle that God of Carnage happened at all, let alone as fantastically as it did.  Katie limped around the stage with her apples-pears-gingerbread clafouti; Theo looked like a dead man before and after the show but performed with such fire and enthusiasm that one might think him healthier than ever.  Loulou stayed home in the morning as well, but she more than rose to the occasion.  Henry, unhandicapped, performed like the only healthy actor in the cast and more, laying waste to the reconciliatory atmosphere with aplomb.  The cast put forth a stunning rendition of a finely crafted commentary on the human condition; expectations were high for God of Carnage, but wonderful performances on Friday and Saturday surpassed them and more.  Congratulations to Owen and the cast on a fantastic show!