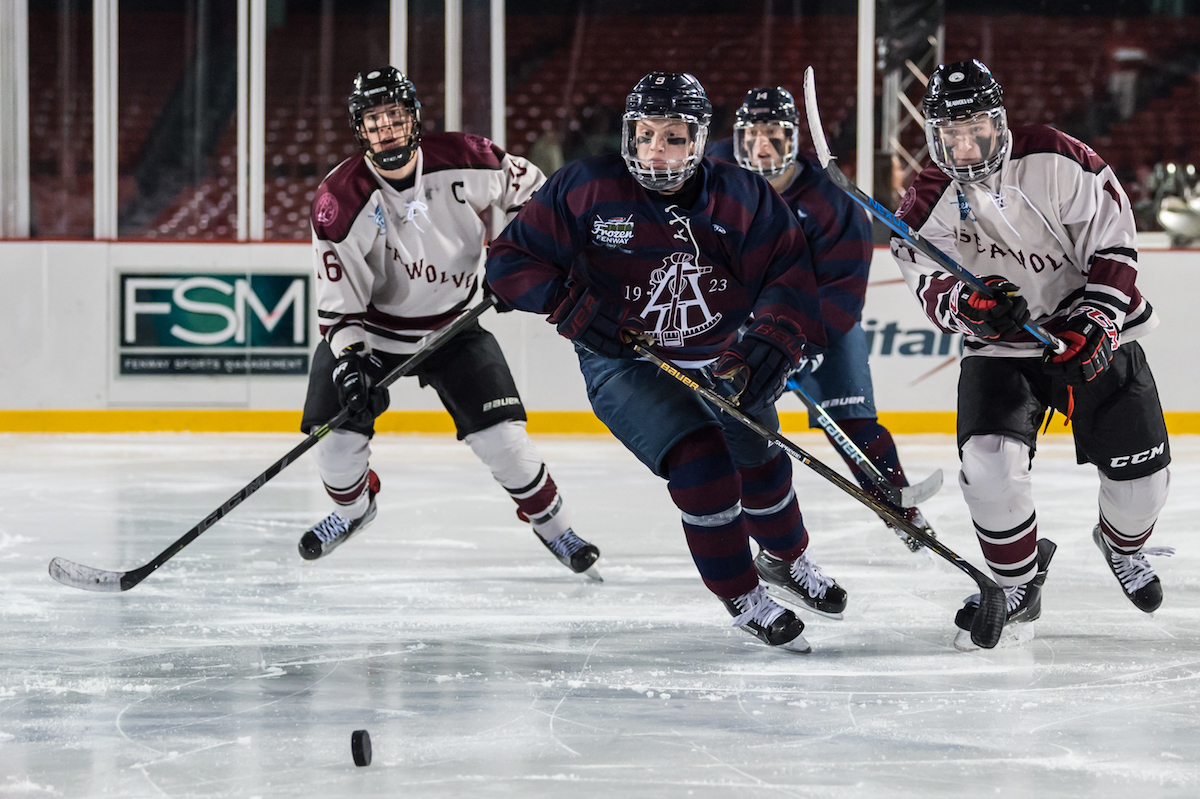 Led by talented senior leaders Sam Hesler, Christian O’Neill, and Jonny Folsom, the Belmont Hill Varsity Hockey Team is enjoying a very solid season. Thus far, the team has compiled a record of 13-5-2. Over winter break, the boys competed in tournaments at the Lawrenceville School in New Jersey and the Nichols School in Buffalo, securing two 5th place finishes. At Lawrenceville, they beat defending champion Canterbury in their last game, and at Nichols, they outlasted a tough Millbrook team in addition to beating Upper Canada College and tying Brunswick. In the ISL, the boys in blue have secured very solid wins over Nobles, Milton, and St. Paul’s, and on a magical night that the team and the school will remember for a long time, they earned a decisive 4-1 win over Tabor at Fenway Park.

Captains O’Neill and Hesler lead the team in scoring, once again proving themselves as two of the most prominent forwards in the league, as well as New England. Seniors Mike Armstrong and Brendan Rocha, and Sophomores Robert Radochia and James Perullo have played tremendous defense and held down the fort. The goalies, Sophomore Connor Hopkins and Senior Jack Eselius, have exhibited very strong play and kept the team in it when they have needed it the most. Senior captain Folsom and fellow senior Peter O’Connell both returned from injury a few weeks into the season and both have shined; Folsom has scored 5 goals in 3 games, while O’Connell scored his first against St. Paul’s and has been giving 100% on every shift. Additionally, returning seniors Evan Daddario and Kyle Maxwell, juniors Max Fields, John Copeland, and Noah Traylor, and sophomores Michael Hayes, Andrew Holland, and Joe Goguen have given Coach McCarthy and the boys consistently solid play. Lastly, new members of the team this year are senior Zach Shpilner and freshmen Mike Brown and Brett Bliss, and all three are proving themselves to be very valuable contributors.

Varsity Hockey now looks ahead to the main stretch of ISL games as they aim to top the Keller Division, climb up the New England rankings, and avenge some losses from earlier in the season. Big upcoming games include Lawrence, Rivers, St. Sebastian’s, and Thayer. Roll sextants.