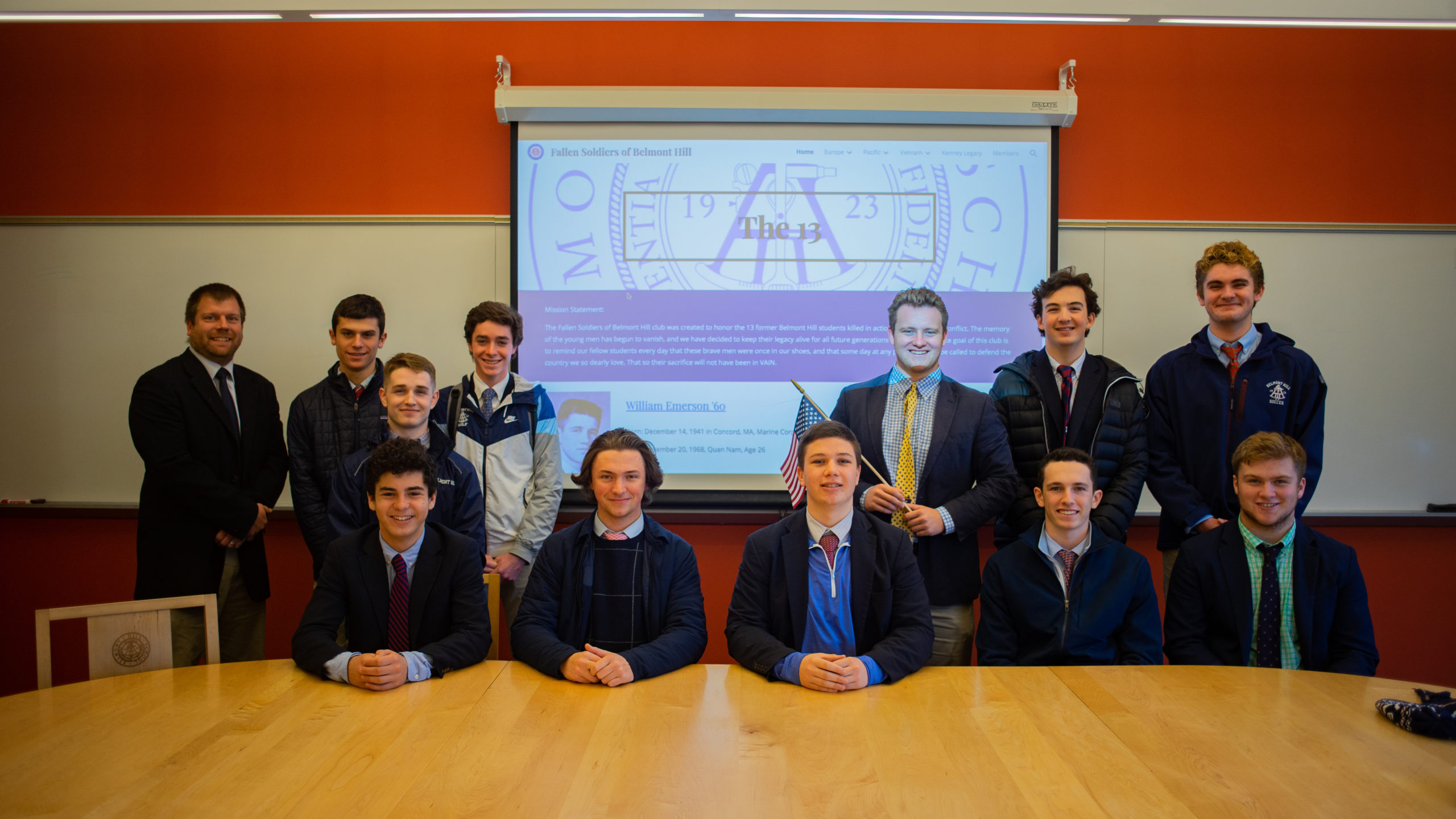 It wasn’t until he stopped to read the plaque under the artwork in the Byrnes Library that Max Peterson ’20 first learned about Belmont Hill’s fallen soldiers. Since that day in the Fourth Form, he has striven “to make sure that their stories were told.” As a self described history buff, Max remarked “If I can miss it, then the average person can miss it.” And so began the project that would turn into the Fallen Soldiers Club. Together with Liam Kelly ’20, Max searched through school archives in the Alumni House and Ancestry.com to learn about what would soon be referred to as “the thirteen.” Max says that for him it was about “bringing to life these young men who really didn’t have any recognition except for the old mural in the library.” Liam adds that “it was an opportunity to learn more about the history of the school and show that there are extraordinary people who come from Belmont Hill.” Both Liam and Max expressed personal connections to the young men who made up the thirteen, as they themselves have interest in serving in our nation’s military some day. Max even included photos of the thirteen on his yearbook page in addition to a quote written by Lt. Michael Silver ’35 to his parents on December 8th, 1941: “Today I listened to ‘Winnie’ [Winston Churchill] and FDR. I have the pleasure of informing you that I will go as soon as I can to whatever branch of the service will take me, and if you write to say that you think I’m being rash, I’ll say you’d better have a doctor look you over and see if you’ve had any red blood in your veins.”

It is clear that both Max and Liam were invested in the project, so too were the friends and classmates they recruited to help. They included, Archie Perry ’20, Ryan McLaughlin ’20, Jack McHugh ’20, Charlie Donahue ’20, Preston Adams ’20, Nick Castellucci ’20, Brady Chitkara ’20, Jack Henehan ’20, James Markis ’20, and Jason Oliveri ’20. Max says that there are many faculty and staff who have helped with this project including Mr. Bradley, the Alumni House, and Mr. Mahoney and his communications team for highlighting their work on the school website. Also, “Ms. Cushman would bring us over [to the Alumni House] and she’d have everything laid out. She did such an amazing job helping us out.” Liam adds that “We can’t thank her enough for just finding those articles to read.”

While their website is published and full of detailed information about each of the thirteen, the work is far from over. Max says that his “involvement with it will never stop.” In fact, he mentioned recent discoveries of a new article and an ongoing video project for one of the young men. “I don’t see an end to this,” he says, and that the main goal is “just trying to keep this alive because as soon as it dies, they die with it.” Liam hopes that now it is easier for all in the Belmont Hill community to find out more about these amazing veterans and patriots. As they graduate this spring, Liam and Max both hope that members of younger classes at Belmont Hill will take interest in the project and continue expanding it.

Reflecting on the legacy they leave behind with this initiative, Max says that for him it was just interesting and fun to explore an untouched pocket of Belmont Hill history. He was especially struck by the sacrifice and education level of each man, many were pilots and leaders in their various service branches. “As much as you think that you’re just small little First Formers, all thirteen of these guys were once little First Formers and they grew up” he says. “For me it was a confidence booster” and made him think  “I could one day try to be like some of these men and try to be that brave and take some of these chances.” Liam adds that “it just shows that these guys who can be revered as war heroes are just like anybody else, they came from the same place that all of us are going to be coming from. It can be anybody in this world who steps up and makes a difference.”

As Belmont Hill finishes a spring characterized by uncertainty, it remains clear that focusing on what we can control is vital to maintaining our community. Efforts like the Fallen Soldiers Club website should be commended for their focus on the bravest alumni of the school and their power in broadening the reach of our community. The Panel wishes Max and Liam the best and thanks them for their contribution to the continued history of Belmont Hill. We also strongly encourage all of you to spend a few moments exploring their website by clicking here. The depth of content is extremely impressive and interesting.