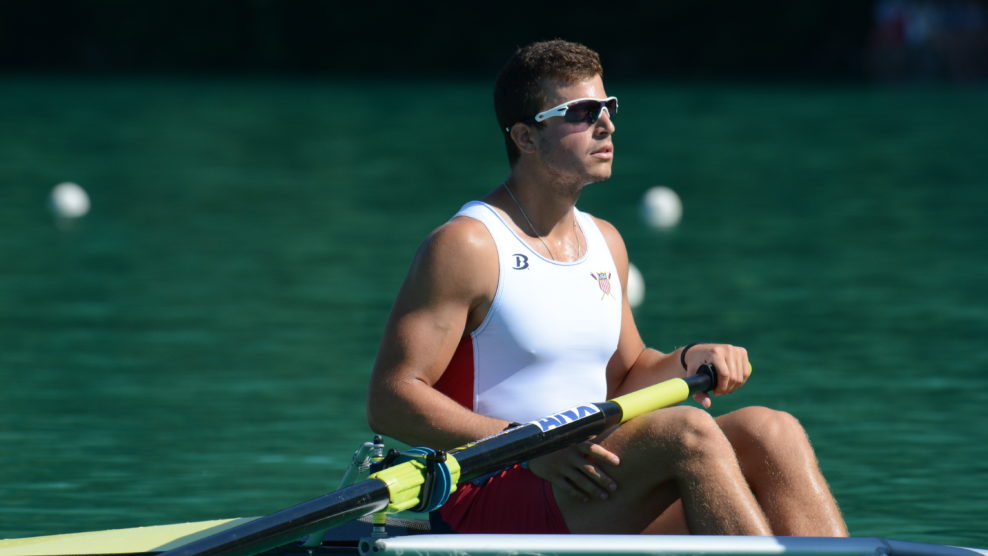 In the shadow of Christ the Redeemer, alumnus Mike DiSanto ‘08 and the US Men’s Eight rocketed down the Lagoa Rodrigo de Freitas.  The water was surprisingly calm compared to previous days and a slight tailwind carried the six Olympic crews down the 2000 meter course.  Every boat pushed themselves to the absolute limit.  This was the A Final, and the winners would be crowned Olympic champions.

Before they had lined up for the medal race, the US Eight endured a grueling week of elite racing against familiar faces.  They came in fourth in heats which sent them to the repechage just a couple days later.  There, they finished first, earning them a place in the A Final.

Looking across from Lane 5, the US crew saw New Zealand to their left and Germany, Great Britain, the Netherlands, and Poland to their right.  Great Britain flew out of the start and built a lead that they would ultimately hold onto to claim the gold.  The US Eight was in the thick of it the entire way and battled with the Polish boat in the sprint.  The Americans ended up coming in fourth, less than three seconds off the bronze-winning Dutch and just 0.39 seconds ahead of the Poles.  Germany captured silver.

As would any competitive athlete, Mike DiSanto expressed some frustration in not making the podium, but ultimately, the boat left everything out on the water.  The Eight was the highest finisher out of all the American men’s crews, and DiSanto joins the exclusive “Olympian Club” at Belmont Hill.  His name will forever be enshrined in the Jordan Athletic Center.

In addition to his success on the water, Mike is looking to rally the Oxford University Boat Club this spring in the famed Boat Race.  He will lead OUBC as President and continue his graduate studies in Psychiatry at the University.  Some of his Olympic competitors will now be teammates as they train to take down the Light Blues of Cambridge.

Though the Olympic flame may be extinguished in Rio, Mike DiSanto is approaching training with increased vigor.  This will not be the last time we see him in elite rowing.