March Playlist of the Issue

March Playlist of the Issue 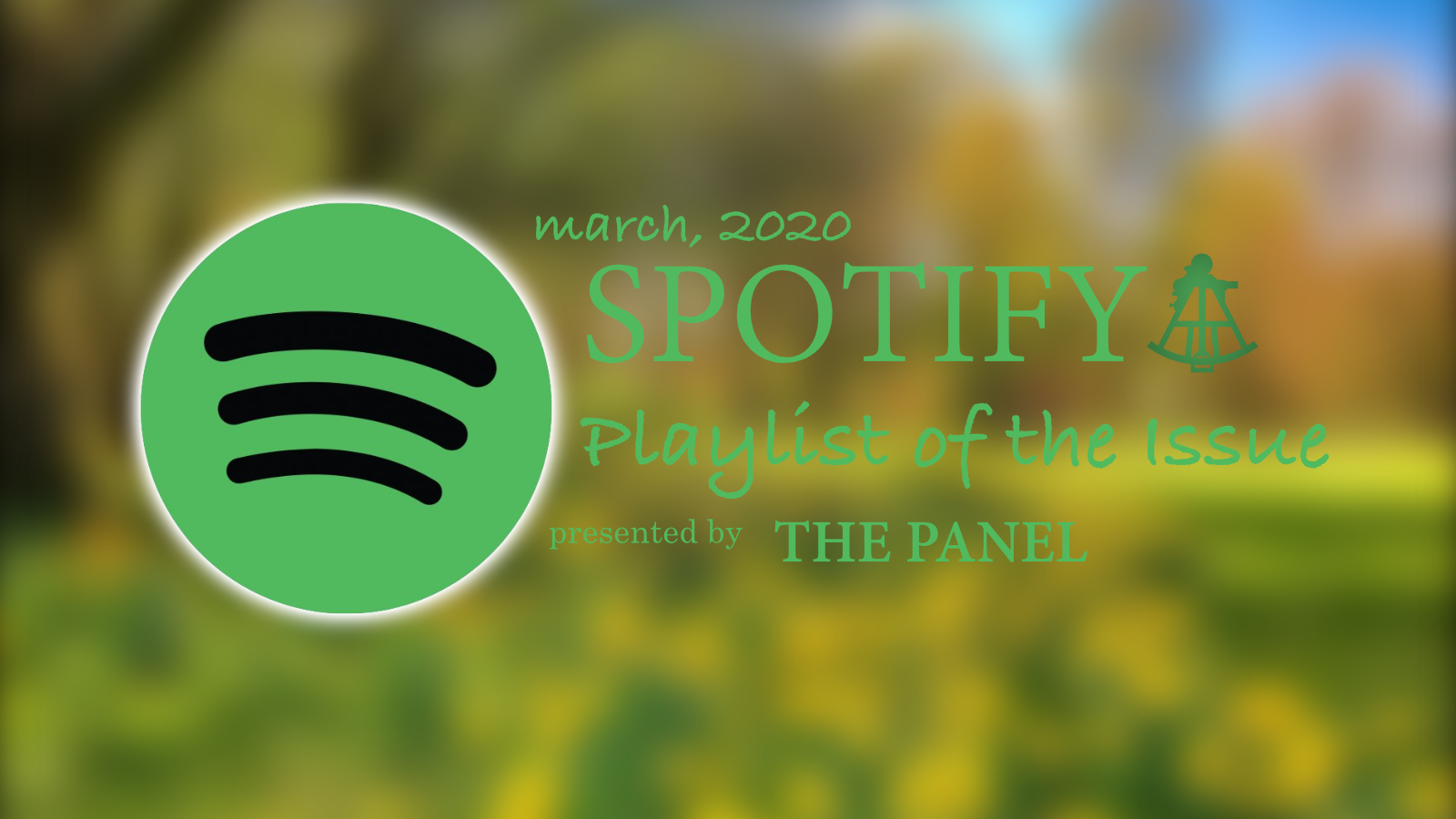 Winsor: I DO listen to a lot of country music, so there will certainly be some on here. But, I’ll try to include something for everyone

A thoughtful and well-done duet wishing the best to an ex.

Fair warning: you have to struggle through about 20 seconds or so of mixed 30s croaking country, but after that it turns into a classic Sam Hunt breakup bop

This is not a song that will shock you with lyrical depth or unique melody, but it’s a great one to have in the background! Very mellow, as most Khalid songs tend to be.

I personally tend to really like the movement of both Khalid’s (see above!) and A Boogie’s music, and their two styles mix together quite well.

I actually heard this song in an Uber! I thought it was too chill to pass up.

A gorgeously sung and super smooth song that you can listen to literally any time.

A relaxed and beautiful romantic tune.

Also anything by H.E.R.! All of her music is fantastic.

As much as it pains me to include a song from the Trolls soundtrack, this kinda smacks.

If you haven’t noticed already, I am a big Jaden fan.  Each of his songs provides unique vibes ranging from a soft car-ride feel to hard rap.  “Summertime in Paris” is truly that perfect spring-time late-night song. Utilizing unconventional instrumentals and effortlessly trading verses with WILLOW, Jaden enchants his audience with a delightfully pleasant tune and melody.  By diverting from traditional genres of music, Jaden possesses that special ability to appeal to all different kinds of listeners. Give it a listen. “Summertime in Paris” could be the first song in your “spring-season” playlist.

For years now, Matt Nathanson has been a very “under-the-radar” type of artist for many listeners.  His style, which incorporates pop-guitar instrumentals and strong vocals, is quite unlike the more current electro/EDM trend, which may explain his lack of notable popularity in the music world.  Nevertheless, if you are familiar with some of his more popular releases, such as “Come On Get Higher” and “Faster”, you will definitely love his newest hit single, “Used to Be.” Although the intro is rather iffy, the melody and bridge are, for lack of better words, riveting.  Catchy yet not repetitive, the song is certain to get your blood pumping at any point of the day. Queue up “Used to Be,” and crank up the volume. I promise you will not be disappointed.

Has anyone heard this song before?  Probably not, I’m guessing. With only around 470,000 Spotify listens, “Big” is not quite the “biggest” song on Spotify’s top charts.  Using rather trendy “EDM-like piano instrumentals,” Bourg really outdoes himself with his new single. Although it is not the best song ever written, the single most definitely deserves a spot on your playlist.  The strongest feature in this song are the instrumentals as Bourg cleverly fuses his vocals with the instrumentals, all while not being overpowering. I wouldn’t want to spoil it for you, so why don’t you just give it a listen.  Who knows? It may or may not be that next song you are looking for.

To begin, I must say that I have never been the biggest Jeremy Zucker fan; nevertheless, his newest single, “always, i’ll care,” is a killer song.  At the outset of the song, the electric piano intro is guaranteed to get you hooked. Overall, I simply enjoy how the instrumentals and vocals flow throughout the song: it never feels as if there is a rigid or rough transition at any point.  “always, i’ll care” is one of those rare songs that are simple in lyrics and tune yet still fulfilling. Don’t be a Z[S]ucker (get it?), and give this song a try!

About a month or two ago, I became a really big Anson Seabra fan.  Although very one-dimensional in his style, if the mood is right, there is nothing better than a sad Seabra tune.  “Welcome to Wonderland” is one of my particular favorites from him. In this song, Seabra sings in the 2nd person, quite literally welcoming you, the listener, to wonderland, an allusion to Alice in Wonderland.  Keeping it simple with soft piano chords and tasteful verses, Seabra seems to almost guide you through a journey while singing. If you’re feeling tired or moody, sit back, and let Anson Seabra take you for a ride.

I must say my selection here was not easy: knowing that I had to add a song from Eternal Atake, Lil Uzi Vert’s long-promised album, I struggled to choose a particular song.  Nevertheless, I landed upon the song, “Silly Watch,” because of its intriguing rhythm and enticing intro. Although honestly, the song is very repetitive as the background instrumentals are constant and there are little-to-no rhythmic transitions, there are definite highlights in the song: the intro verse is exceptionally captivating, and the song most certainly gets your blood pumping.  I don’t have much to say for the new album as the verdict is still on the table for whether it was worth the wait or not. Try listening to the album, Eternal Atake, and let me know what you think.