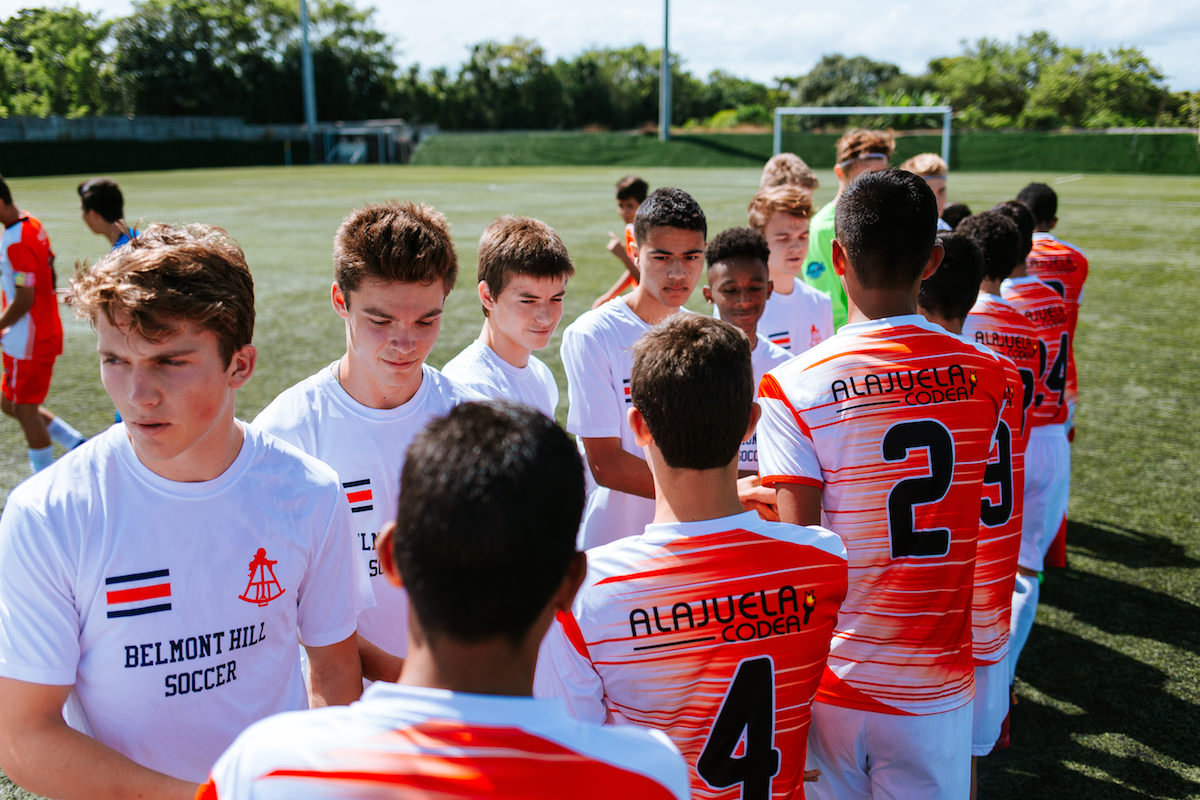 Two weeks prior to the start of school, the Belmont Hill Varsity Soccer team took a group trip to Costa Rica, which gave the team time to play competitively, relax, bond, and grow closer to one another. Belmont Hill started off at the Wyndham Hotel in San Jose, where they stayed the first three nights. Fifteen hours after arriving, the team, sporting custom uniforms made by Duncan Grant ‘18, took the field against Codea. After a 9-0 win, in which Matthew Goncalves ‘20 took player of the game with 5 goals, the team took an afternoon city tour of San Jose. Belmont Hill enjoyed some downtime before the next game, which was played in the stadium of a major Costa Rican club team. Liceo Samuel Saenz, the team the Belmont Hill played, was a much stronger competitor. Coach Montoya, with the game tied at the half, gave a much-needed pump-up speech, and goals from Matthew Goncalves ‘20 and Leighton Dolan ‘19 secured the win. On the fourth day of the trip, Belmont Hill traveled to the San Carlos rainforest. There, the team was able to visit the La Fortuna waterfall, as well as enjoy white water rafting. After these great adventures, Belmont Hill traveled an hour to play a game against Colegio Diocesano under the lights. Belmont Hill was successful again, winning 4-0. Matthew Goncalves ‘20, won player of the match for the third straight game.

After San Carlos, the team took a bus to the beautiful Punta Leona resort, with huge pools and white sandy beaches, where the boys enjoyed two days off. While there, the team was able to play beach soccer and play with a Waboba, a ball that skips on water. However, the most exciting activity there was zip-lining through the rainforest. The day before the flight home, the team drove back to San Jose, where the boys had lunch and played a final, toughest game against Liceo de Escazu under the lights. Matthew Goncalves ‘20 scored an amazing free kick goal to secure the win, and Hamza Shemsu ‘20, won player of the match, due to his quick play and crafty footwork. The final day, the team left promptly from the Wyndham Hotel and arrived at the airport at 4:15 AM.

The Costa Rica Soccer trip was a success on many levels. The team experienced incredible bonding time, exciting adventures, and four successful international games. This article would be incomplete without mentioning the guide for the trip, Javier, who was with the team every step of the way. Thank you to Javier and everyone who took care of the team during Belmont Hill’s stay. Pura Vida!

This year’s Varsity Soccer team has big shoes to fill. The boys in blue have made it to the NEPSAC Class A tournament two years in a row and finished high in the ISL standings with impressive records in both of those seasons. Despite graduating eleven seniors, five of whom were starters, Belmont Hill’s new squad is looking as

strong as ever. Returners Jack Bell ‘18, Duncan Grant ‘18, Brian Antonelli ‘18, and Michael Montanaro ‘19 make up a formidable defense with years of experience. Behind them, James Cahill ‘20 has played solidly in net throughout the preseason and looks ready for the season ahead. The Hill’s offense is looking just as strong; strikers Leighton Dolan ‘19, Matthew Goncalves ‘20, and Oisín Treanor ‘18 have dominated defenders throughout the preseason. The remaining starters are all returning players, which means the team will have lots of experience going into the start of ISL play. In addition, the team added ten new players who will add to Belmont Hill’s depth.

The team kicked off their season on September 13th against Bridgton Academy. After a slow start, Belmont headed into halftime up 1-0. Thirteen seconds into the second half, Goncalves ‘20 snuck the ball far post past Bridgton’s goalie, putting the Sextants up 2 – 0. Belmont continued to dominate Bridgton from there and won 5-1. Not only did they win their season opener, but they also beat a class A school, which helps their NEPSAC tournament chances. In their next game, BH defeated Phillips Exeter Academy 3-2, a well-earned victory against a strong competitor. They began their ISL season on homecoming against rival BB&N. Montoya and the team cruised to a 2-0 victory. After two key wins against Tabor and Groton, 2-1 and 3-1 respectively, the soccer looks to dominate in ISL matches. Other notable ISL matches include Nobles (10/7/17), St. Sebastian’s (10/14/17), Brooks (10/20/17), and Milton (10/28/17).