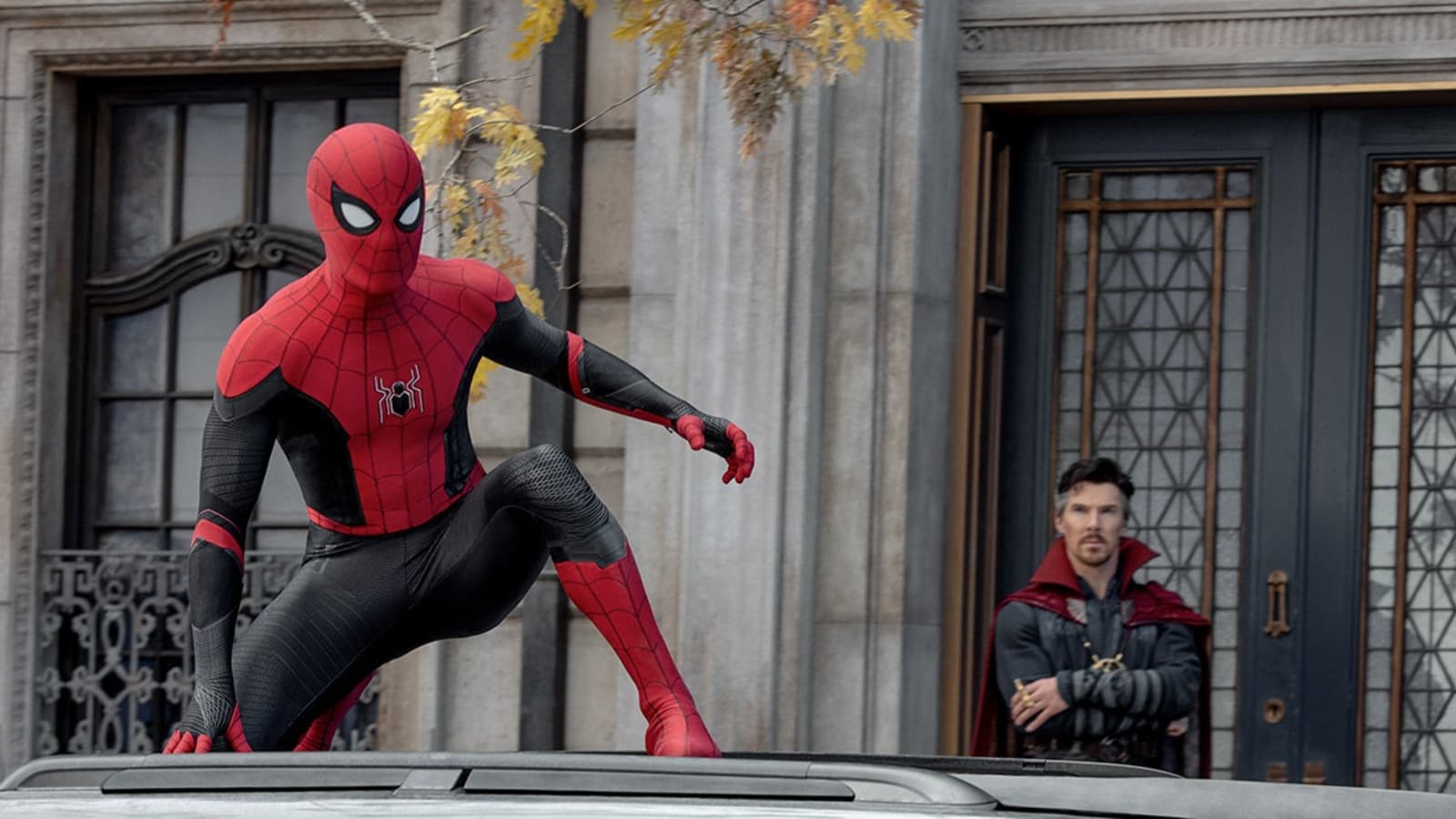 The superhero film genre is a curious thing. After years of buildup and interconnectivity, it often seems that a superhero movie need not be aptly constructed or emotionally compelling to feel rewarding and satisfactory. However, when a film is able to work both sides of that coin, sitting in the movie theater becomes a religious experience. Spider-Man: No Way Home is one such film. As this film has been out for some time and there’s not much I can say about it without divulging major plot elements, spoilers follow. Be warned.

The third and final film in the Marvel Cinematic Universe “Home Trilogy,” NWH immediately following the events of its predecessor, Far From Home. Peter Parker (Tom Holland) has been outed as his alter-ego Spider-Man and framed for murder, an act that puts him and his loved ones, in great jeopardy. After bearing witness to the detrimental effects the media frenzy has had on his friends MJ (Zendaya) and Ned’s (Jacob Batalon) college admittance, he turns to fellow superhero Doctor Strange (Benedict Cumberbatch) to concoct a spell to make the whole world forget Peter Parker is Spider-Man. This is where the fun begins.

As he tries to ensure his closest friends and family remember his alternate identity, Peter’s mid-spell interference crosses some wires. His insistence that everyone who already knew Peter Parker was Spider-Man should remember such throws open the Multiverse, allowing villains from prior, non-Spider-Man villains to cross through inter-dimensional barriers and torment Holland’s Parker.

This film is very silly. Various acts of contrivance and conceit are necessary to do what the film requires—compel fans to come to the theater by the tantalizing thought of seeing iconic characters return to the screen. Green Goblin (Willem Dafoe), Doc Ock (Alfred Molina), Sandman (Thomas Haden Church), The Lizard (Rhys Ifans), and Electro (Jamie Foxx), representatives from all films prior to Holland’s tenure make their grand re-entrance into the Spider-Man franchise up to twenty years after their last appearance.

What is surprisingly successful about this endeavor is, despite their inclusion alone being enough to appease fans, the film goes to great lengths to explore the individuality of each “villain.” Every character reacts to their situation uniquely. Each one is given time to interact with the new Spider-Man. They all have importance to the plot and service the dramatic proceedings of the film. While the gimmick could have just felt, well, gimmicky, brilliant returning performances and their non-shoehorned incorporations make for great fun.

The central conflict of the film arrives when Strange attempts to send all five of the dimension-hoppers back to their realities, despite the fact that many of them face certain death upon arrival. The ever-good intentioned Parker takes issue with that and instead devises a plan to “heal” the villains of their destructive powers so that they can cease to cause harm and might return to normal lives. Here comes a moment where the movie’s inherent silliness comes at logical detriment. This central goal is the film’s most glaring issue as it simply makes no sense. Though it’s easy to overlook during the excitement of the film, Peter’s nonsensical plan only succeeds in stripping these people of their powers before returning them to a deadly fate.

Regardless of sound logical reasoning, Peter’s plan goes pretty well until the Green Goblin personality takes control of Norman Osborn’s body in a sequence that is an instant classic in comic book cinema. In a visceral sequence, Parker and Goblin, both unmasked, fisticuff through floors of an apartment building. This film makes the wise decision to cast aside the Goblin’s iconic mask early on, allowing for Dafoe’s performance alone to strike fear into Peter and the audience’s hearts. When I was a wee lad, two things scared me more than anything else: The Wicked Witch of the West and Willem Dafoe’s Green Goblin. Well, Dafoe’s back and better than ever. His menacing, cackling laughter in the face of Parker’s powerful blows are off-putting and shocking. In this sequence, thanks to Dafoe’s performance, what has been an upbeat movie changes tones. The scene ends with the devastating murder of Peter’s Aunt May (Marissa Tomei) at the hands of the Goblin, an act that yet again leaves Peter an orphan and forces him to come face-to-face with the consequences of superheroing. In her last moments, May gets to deliver the iconic line often attributed to Peter’s Uncle Ben, “with great power, there must also come great responsibility.” Holland’s performance in the face of utter devastation elevates a gut-wrenching moment that recontextualizes the entire film without giving the audience whiplash.

Just when Peter and the audience are at their darkest moment, the audience is treated with a surprise most knew was coming but remained utterly sublime. Not only villains crossed the interdimensional boundary, as prior Spider-Men, Tobey Maguire, and Andrew Garfield, return to the screen. Nine-year-old Daniel would not believe his eyes, and frankly, neither did the eighteen-year-old. The two arrive to console Holland’s Peter in his time of sorrow and offer a hand in the final climactic battle. By treating the three as brothers suddenly uniting despite their rather isolating experiences of being Spider-Man, a gimmick is once again evolved into dramatic gold. These two are the only ones who can truly relate to Peter’s struggle. Their camaraderie and banter are natural and joyous. A scene that finds the three working together in a lab kept a stupid grin on my face the whole time. Their union is a rewarding and emotional moment for someone like me, whose childhood was bolstered by the individual adventures of these three incarnations.

The highlights and greatest asset of No Way Home are its unforgettable performances.       To see Maguire return to a role that made me fall in love with movies was a dopamine-inducing thrill. Yet, it is Garfield, the victim of being a great talent in two dreadful Spidey films, who steals the show. Rarely have I seen a performer do so much with so little screen time. Garfield exudes charisma and offers a rather redemptive return for the often forgotten middle-child Spider-Man. The excellent Dafoe provides his best performance as the Green Goblin, while Foxx aptly provides comic relief as a much cooler rendition of Electro than previously displayed. Molina steps right back into the shoes, or should I say tentacles, of the good-at-heart Doctor Otto Octavious. Most importantly, Holland turns in his best performance in the role yet. The bonafide leading man continues his Spider-venture with all necessary dramatic and comedic chops while imbuing the web-slinger with distinct physicality. His friendship with Batalon’s Ned continues to be a comedic highlight of these films, and his chemistry with Zendaya provides the film with an emotional core, making Peter’s final sacrifice all the more meaningful.

The film’s somber ending seems to address one of the most prominent criticisms of Holland’s version of the character. While I have always been a fan of the character’s most recent outings, his reliance on fanciful technology and the support of Tony Stark has never given the feeling of a “friendly neighborhood” hero. Peter’s decision to allow the whole world to forget Peter Parker leaves him truly on his own. With May gone and his friends’ inability to remember him, he is left to fend for himself. While the ending feels a little incongruous to the rest of the movie, it offers a chance to show genuine growth in Peter and, in a sense, finally complete his origin story.

I’ve had an up-and-down relationship with the Home Trilogy. Director Jon Watts delivered what may very well be the best Spider-Man film in Homecoming. However, I was left disappointed by the globetrotting Far From Home, which excelled in portraying a budding romance between Peter and MJ yet lost a piece of the character in taking him out of New York. Luckily, Watts proves Homecoming was not some fluke with NWH, a singular achievement whose heart equals its applause-inducing spectacle. He juggles a massive quantity of characters, a feat that has been the downfall of past Spidey films, with ease and engaging pace. Emotional beats are left time to breathe while action is thrilling and inventive. One of my concerns going into this film was that all of the returning elements from previous films would distract from Holland’s journey. Luckily, the screenplay from Chris McKenna and Erik Sommers never sacrifices Peter, Ned, and MJ’s story for the sake of fan service. Marvel Studios and Sony pulled off something immensely impressive in this film. It’s far from perfect and likely nonsense to the uninitiated, but as a lifelong fan of this material, I couldn’t have asked for a more fulfilling time at the theater.