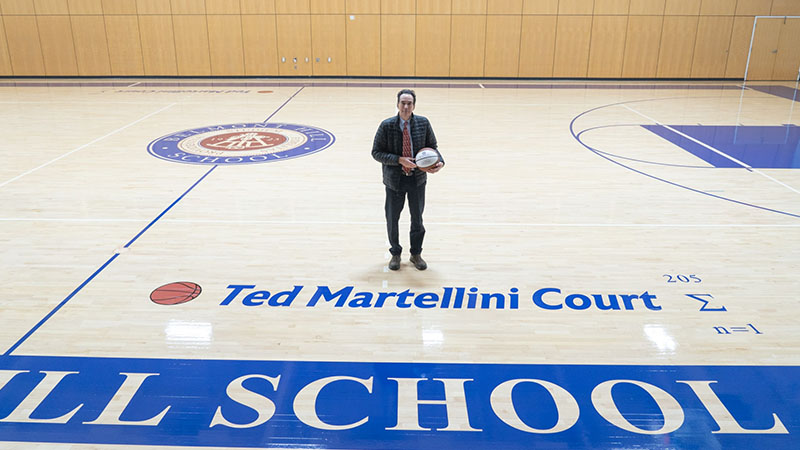 On the frigid morning of January 3, the community gathered for a special Chapel that was held outdoors for safety precautions. After talking to the boys about safety protocols for the coming weeks, Greg Schneider, Ronald M. Druker ’62 Head of School, announced that he was eager to share news of “incredible Belmont Hill spirit” to kick things off for the semester.

Mr. Schneider explained that the School recently had an alumni donor, Josh Isner ‘04, give two spectacular gifts to Belmont Hill. The first was in honor of his mother, Linda Isner, who was the Head of the Parents Association at Belmont Hill. In a wonderful tribute to his mother, Mr. Isner had dedicated the Director of Parent Engagement Office in the Jordan Athletic Center in her name.

The second gift was directed toward a member of the audience, who had no idea what was coming. Mr. Isner, who managed the varsity basketball team while Ted Martellini coached, has gifted the School with the naming of Ted Martellini Court.

A visibly touched Mr. Martellini appeared both overjoyed and shocked. “I had no idea this was coming, and I am both deeply humbled and honored by Josh’s kindness,” he explained. “Josh was a remarkable student, an incredible manager, and an even better person. I am overwhelmed by this honor, and very, very grateful.”

During his 14 years as varsity basketball coach, Mr. Martellini compiled a record of 205-125. He has sent many players on to the collegiate level and was widely known for getting the most out of his players. “While the achievements were wonderful, they are surpassed only by the stories,” Mr. Schneider said. “At the heart of his coaching stories are relationships that changed lives. He has held boys accountable and watched them routinely accomplish feats that they themselves did not think were possible.”

Mr. Isner believes that during his years at Belmont Hill, Mr. Martellini exhibited as much energy and passion on the basketball court as he did in the classroom. “He is the model teacher/coach,” he says. “While I’m not sure my calculus has withstood the test of time, the leadership and team-building lessons I learned on that court were foundational to my career. My family and I are so grateful for the opportunity to recognize Coach Martellini in this manner.”