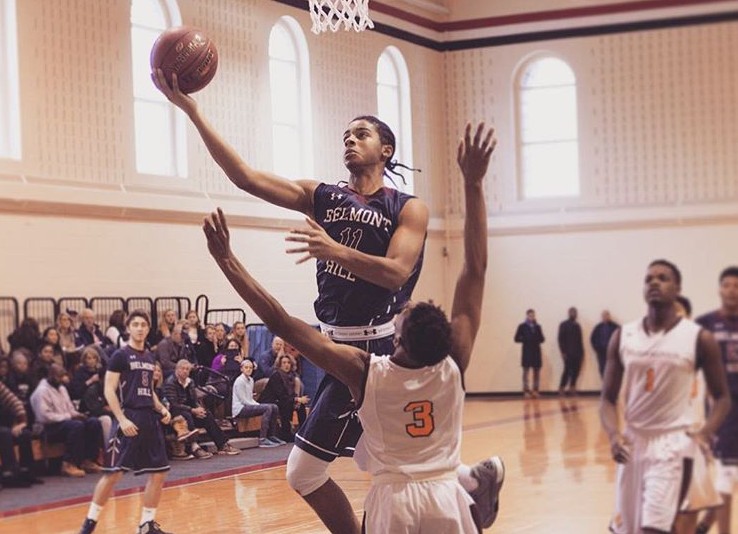 Sophomore Jake Haase maneuvers around a Lawrence Academy player and strips the ball from a guard, while number 23 Jovan Jones sprints up the court. Stooping over, Haase scoops up the loose ball and lobs it up the floor. Bouncing once, the ball meets 6-foot five-inch Jovan in stride. Without dribbling, he effortlessly takes two steps and jumps, curving his body to the left before slamming the ball into the hoop.

This memorable play, one that has infiltrated the monitors around campus recently, begins the highlight reel for Belmont Hill’s January 23rd game at Lawrence Academy. It is a play that encompasses the team’s ferocity, explosive nature, and ability to rise above the competition (and the rim, in Jovan’s case).

Belmont Hill wasn’t supposed to win the game at Lawrence. Upon seeing the height of Lawrence’s center, the athleticism of guard Maurice Works, and the endless variety of dunks Lawrence players were performing in warmups, I wondered if our team had a chance. Even when I texted sophomore co-captain David Mitchell that night and heard the final score was 66-49, I assumed Lawrence had been the victor. David’s follow-up text, “Yea we played well,” shocked me…had Belmont Hill really beaten Lawrence Academy’s juggernaut basketball program by 17? The varsity basketball team had certainly surprised me, as they have been doing to countless people all season.

After the skilled trio of Sultan-Farouk Olusekun ‘15, Hilal Dahleh ‘15, and Jesse Wims ‘15 graduated last Spring, the varsity basketball team prepared itself for a rebuilding year. When they were sophomores during the 2012-2013, Sultan, Hilal, and Jesse fell victim to a similar phenomenon, as Belmont Hill had lost talented seniors the year earlier. The team struggled that year, finishing a meager 8-16. Accordingly, David Mitchell entered this season with an important goal: “We need to continue the success of last year. We can’t drop off like Sultan and those guys did their sophomore year. It would be great to be a top team in the ISL like last year.” Jovan also noted the leadership void left by the departure of Sultan, Hilal, and Jesse: “They’re not here to be the go-to guys anymore.” David echoed this sentiment: “We [Jovan Jones and David Mitchell] have to step up and be leaders now.”

The team has done a tremendous job maintaining the momentum built by last year’s success. As they hoped to do, David Mitchell and Jovan Jones have both been key, while senior co-captain Austin Masel with his unmatched athleticism has also played a crucial role in their 5-1 ISL start. Other indispensable include sophomore starting point guard Jake Haase, sophomore Jake Bobo, and sixth man shooter Kevin Michael O’Boy. Senior AJ DiFillipo and junior John Sommers also provide valuable minutes off the bench. Their 5-1 ISL start is validated by big wins over Lawrence, Rivers, and St. Sebastian’s and has earned them second place in the standings, behind only Brooks. Their single ISL loss was to 6th-place Milton Academy, a game David and Jovan agreed was the low point of the season, at least thus far. Unfortunately, the non-conference schedule has been marred by close losses to Nobles and the Masters School but also includes wins over Trinity-Pawling and Marianapolis. As the season progresses, Belmont Hill Varsity basketball looks to maintain its top standing in the ISL. While it is more difficult to attain, “making the NEPSAC Class A playoffs would be awesome too,” says David.

With a strong February, Belmont Hill will certainly have a shot at this year’s ISL title. However, even more, exciting about the program is their future. The 2016-2017 and 2017-2018 seasons will reap the benefits of this year’s astonishingly young lineup. Currently, four out of the five starters are sophomores (Mitchell, Jones, Bobo, and Haase), while the sixth man (O’Boy) is only a freshman. David and Jovan lead this promising group of young, talented athletes. Already the team’s most valuable players, Mitchell and Jones will tremendously impact the ISL basketball landscape over the next two years. With maturity, growth, and improvement, their potential as individual stars and as a cohesive unit is limitless. Plus, with sophomores Quentin Harris, Spenser Smith, and Justin O’Neil Riley set to play bigger roles next season, the future is very bright. Take it from Jovan:

“Senior year, the varsity team will be the best basketball team Belmont Hill has ever seen.”