Varsity Football Presses on Through a Solid Season

Varsity Football Presses on Through a Solid Season 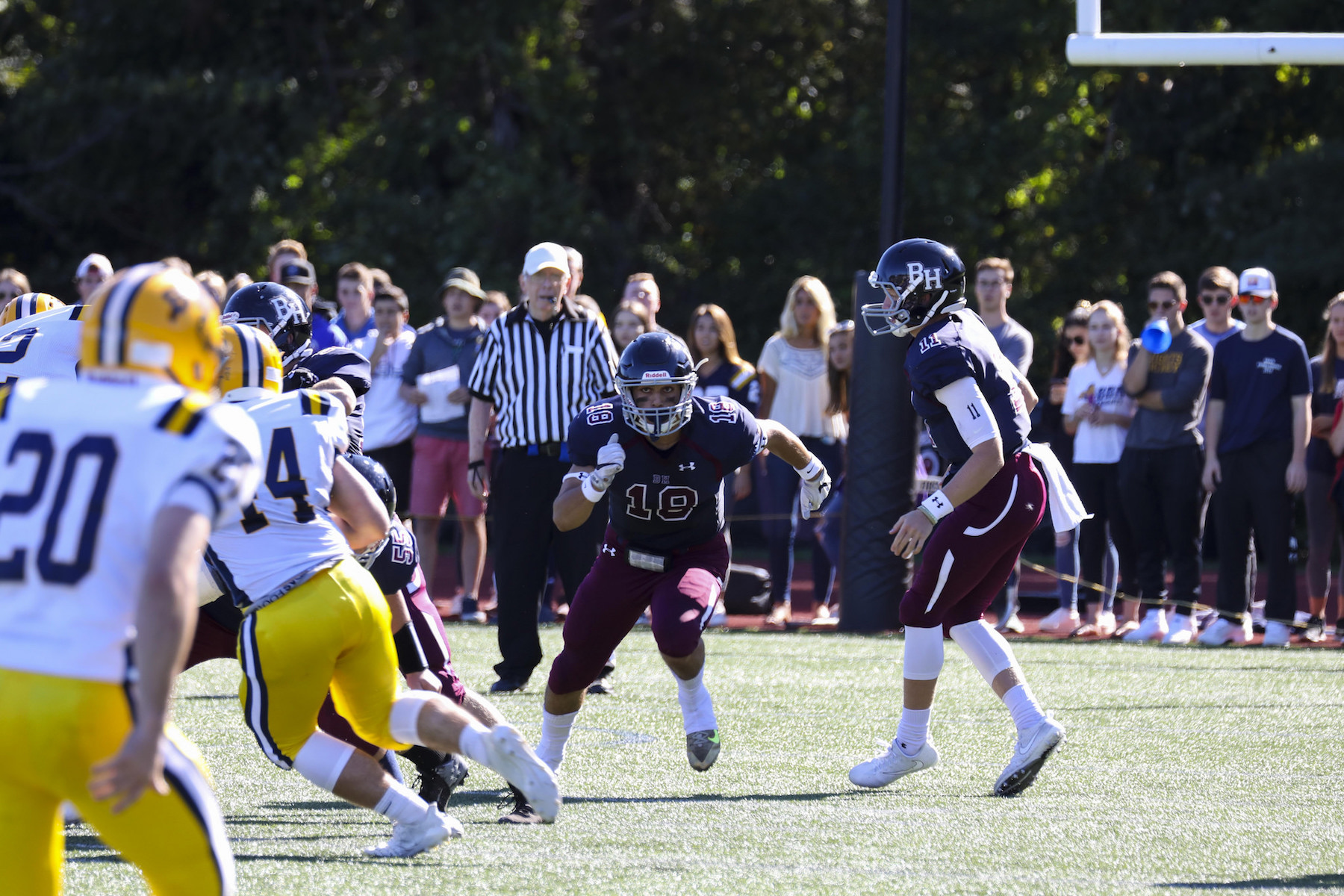 As a cold November envelops Belmont Hill, the end of the football season fast approaches. Throughout the fall, the team has battled hard against tough opponents such as Milton and BBN and boasts a solid 4-3 record so far. However, as the last few games approach, the team’s skills will be put to the test. With Lawrence Academy and Governor’s Academy coming out to play in the next couple of weeks, the rest of the season looks exciting, to say the least.

So far in the season, Varsity Football has performed well. The first game of the year was a great success. Belmont Hill came out of the locker room ready to go, and it was apparent from the first play. Cameron Reirden ran back the kickoff to within 10 yards of RL’s goal line, and the game was a breeze from there on out. BH emerged with a 35-0 win and an auspicious start to the season.

Six days later, it was BB&N’s turn. The BH Varsity didn’t come out on top this time, but they played a solid four quarters against a notoriously good team. A final score of 21-0 for BB&N showed that BH had a lot to aspire to, but the Loop sure didn’t. Showing up loud and proud in a classic whiteout, they cheered on our boys from start to finish.

A week later, the BH Varsity headed south to Marion for a contest against Tabor Academy. The game was well fought, and the Varsity came back from trailing 6-0 in the first quarter. After our first touchdown, the momentum of the match shifted heavily, resulting in a final score of 21-6 for BH. The defense shut down Tabor’s offensive drives after the first quarter, and they didn’t score another point for the rest of the game. One of the best plays was from all-star defensive tackle Myron Duarte, who sacked Tabor’s quarterback for a significant loss. Many called it “the crack heard around the world” and some could even feel the blow from the sidelines.

Next up was at Milton Academy. In another tough matchup, BH didn’t manage to secure the win in this one. Play after play, the offense drove down the field, but to no avail. Milton led by a small 12-7 margin at the half, but BH couldn’t close the gap. Both teams scored in the second half, but BH had summoned up a second wind, and it seemed that the momentum had shifted. With a fantastic run-in touchdown by quarterback Mike Piazza, it brought the score to within 5 points, but time was not on BH’s side, and the game’s fate was sealed.

The following Saturday, Nobles came to the Hill for yet another face off. Following a kick return turned touchdown by team captain Jackson Bobo, within the first 2 minutes of the first quarter, it was a smooth ride for BH. With a consistent offense and a relentless defense, BH only let up one touchdown in the last quarter and managed 41 points of their own, resulting in a final score of 41-7. Never deterred by Noble’s sheer size, the team proved its worth through all four quarters.

In the team’s most recent contest, against rival St. Sebastian’s, the team produced one of the most exciting games in recent history. The two schools went back and forth, until a last-second interception by Cade Nagahama ‘18, secured an incredible victory, bringing the group over .500 heading into it’s final few contests of the year.

Over the past month and a half, BH’s Varsity Football team has proved again and again that they are up for the challenge, but the real test comes with the last three games of the season. Facing off against three great teams, the Varsity’s skill, determination, and resilience will be put to the test throughout the next couple of weeks. Regardless, it has been made clear that BH’s football team leaves everything out on the field. Go BH!