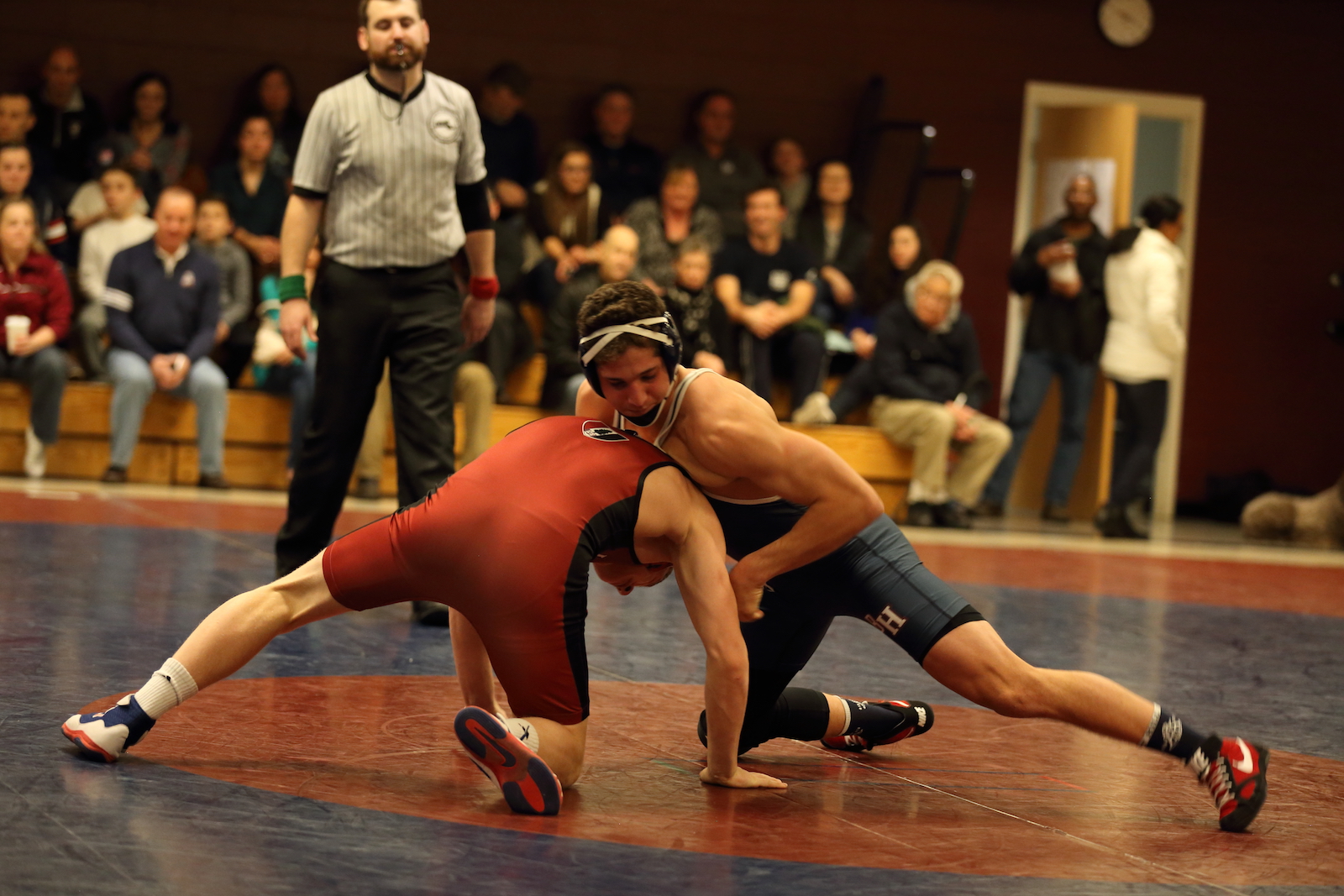 Rounding out the first half of the regular season with an exceptional 12-0 record, Varsity Wrestling has continued to blaze a trail of dominance through the ISL and New England Prep circuits. Facing several tough injuries, the squad has looked to capitalize on its depth, with many of the team’s victories resting on the shoulders of newcomers to the starting lineup. Handily defeating nearly every opponent by solid margins of at least 30 points — including two back-to-back shutouts against Lawrence Academy (73-0) and Thayer Academy (75-0) — on January 21, the team confronted their toughest challenge yet, hosting a defiant Roxbury Latin and three other teams at a quad meet.

Besting an RL wrestler at 106 pounds, newcomer Hamza Shemsu ‘19 started off the match by giving Belmont Hill a 3-0 lead on the scoreboard. Nevertheless, facing a string of hard-fought losses, as Seth Israel ‘18 walked on the mats to wrestle off at the 138 pound weight class, the boys in blue trailed by 14. Securing another 3 points after a well-executed three-period match, Belmont Hill fell another 6 points after a demanding match at 152.

Sitting on the lower end of the score by 16 points — a first for the team this season — the perennial powerhouses of Beast of the East Champ Phil Conigliaro ‘18, and former freshman phenoms Colin Vallis ‘19 and Luca Pontone ‘19, all came up with much needed victories for the home team.

With the score now tied at 23-23, Fifth Former Billy Weldon ‘18 stepped on the mat, filling the role of Captain Will Ryan ‘17 at 182. Undeniably the pivotal match of the day, Weldon exemplified the depth and perseverance that has come to dominate the wrestling program at Belmont Hill. Coming up with a slight lead to start the third period, Weldon fought impressively off his back to earn Belmont Hill its place at the top of the scoreboard. With “big guns” Mike Glauninger ‘19 and Shane Rockett ‘19 each pinning their opponents, Belmont Hill triumphantly reclaimed the match for a dramatic 38-29 victory. Ending the day with additional wins against Phillips Andover and Loomis Chaffee, the squad moved just as swiftly the following Wednesday (January 25) to secure a commanding victory over the (formerly) undefeated squad at Middlesex (78-4).

A true testament to the strength of the program, the middle school team has also demonstrated their extraordinary dominance over their opponents, clearly letting their adversaries know that they won’t be a team to be trifled with as they move up to the Varsity program. Defeating opposing schools with a plethora of pins, this year’s first form wrestlers capped off an impressive showing at the annual Fay School tournament (a rite of passage for seventh grade wrestlers at Belmont Hill), with all of them coming away with 1st place ribbons.

With such dominance throughout the wrestling program at Belmont Hill, it’s certain that the program is poised to excel this season, and in many seasons to come.

Update (February 7, 2017): Facing a string of opponents leading up to the Graves Kelsey ISL tournament, the team stands with additional victories over Avon Old Farms, Long Island Lutheran, Nobles, St. Sebastian’s, and Brooks. Met with a tough, one point loss from perennial powerhouse, Phillips Exeter, the team is poised to avenge this loss and continue its legacy to round out the rest of the season.