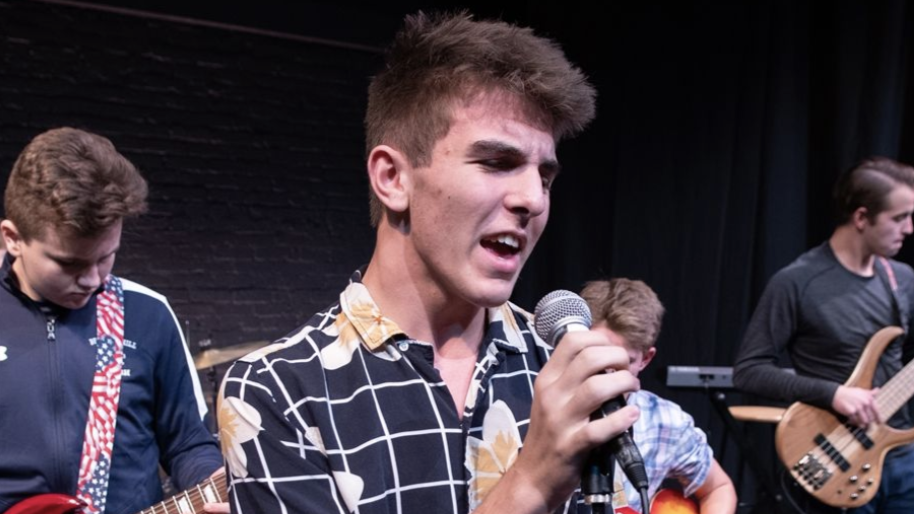 Another year, another success. Performed at the Kraft Theater, the Belmont Hill Winter Coffee House held many unforgettable musical acts. With Kailen Richards and Adam Alto as MCs during the performances, the tension in the room was relaxed and filled with laughter through their various jokes surrounding both students and faculty members. Starting off the Coffee House was the Middle School Rock Band, performing beautiful renditions of “The Chain” by Fleetwood Mac and “More Than A Feeling” by Boston. Following this group of boys were James Markis, Jack McHugh, Aidan McGaugh, & Mr. Bracken playing “Castle on the Hill” by Ed Sheeran; Mr. Bracken, on the viola, stunned the crowd even though he only practiced for a few hours prior. Other memorable performances were that of Kailen Richards singing and playing the guitar for Walter Mitty’s “Let’s Get Breakfast,” Andrew Jinhee Lee’s solo delivery of “Naked” by James Arthur, and Brian Lee’s beautiful cover of Yurima’s “River Flows in You.” Mr. George, performing a unique cover of Coldplay’s “Trouble” on garage band and piano, amazed the crowd with his musical prowess — followed by the Upper School Rock Band playing “Reptilia” by The Strokes and “What A Fool Believes” by The Doobie Brothers and Tim Brown, Charles Geddes, Charlie Stevenson, Mr. Fiori delivering a cover of “The Dream” by David Sanborn.

Though the night was filled with acts from very musically gifted musicians, one of the most captivating acts of the Winter Coffee House was Andrew Jonghyun Lee’s solo performance of his song “Cigarette Lady.” After his and Adian McGaugh’s performance of Howie Day’s “Collide,” Andrew left the crowd in awe while performing his original song through his amazingly clear voice mixed with his mastery of the piano.

Nevertheless, Coffee House could not have been able without the faculty and students running the lighting, set, and sounds during the show — Abe Tolkoff on the lights, Mr. Duarte and Mrs. Kaplan on the set, and Danial Cho, Will Kelly, and Alex Lo on the sounds. Thank you, Mr. Fiori, and all the performers for a marvelous Coffee House.