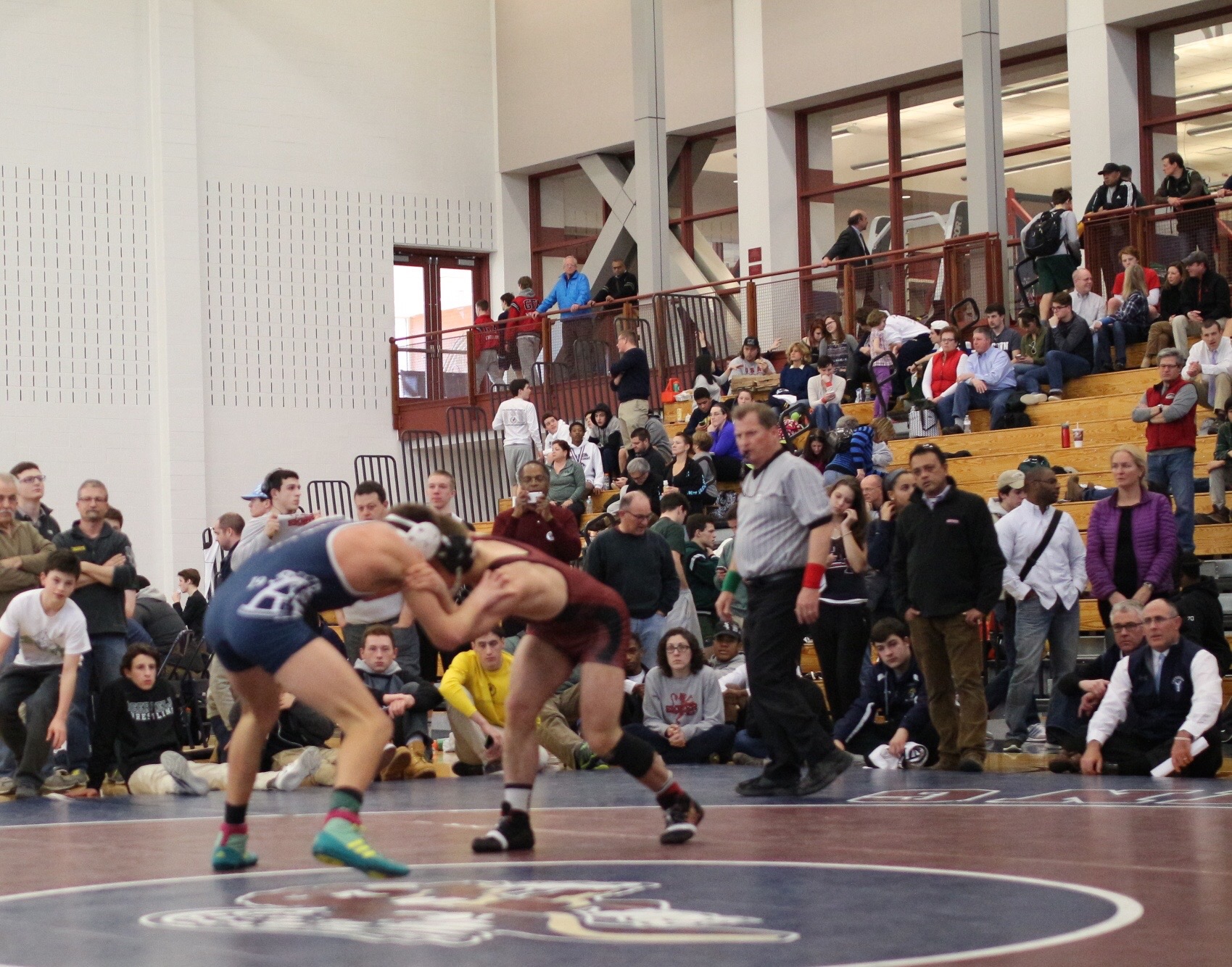 The 2016 Belmont Hill Varsity Wrestling Team has now achieved every single team goal it set out to accomplish at the beginning of the year. All three banners in the wrestling room have now been modified to reflect this historic 2016 season. The team, which secured the ISL Dual Meet Championship after a 24-0 regular season, is, according to Mr. Bradley, the first undefeated varsity wrestling team in school history.  The team subsequently advanced to lay down a postseason performance for the ages — one that the school community will long remember.

The annual, Belmont Hill-hosted Graves-Kelsey Tournament augured great things for the team.  Starting at 106, Ryan Williams won first place with a nail-biter finals match against a Brooks opponent to whom he had lost just a week before.  Freshman Matt Smith (wrestling at 113) and first-year wrestler Maahin Gulati (120) both stepped up in a big way, securing fourth and fifth place respectively, and earning spot on the podium and some hardware to take home. At 126, two of New England’s best wrestlers clashed in the finals, with sophomore Seth Israel fighting heroically against a Brooks senior and taking second place. At 132 Henry Griffin sealed third place with an impressive and surgically performed takedown in sudden death overtime in his final match. Captain Pete Tedesco bulldozed his way through his 138 lb bracket with ease, pinning all of his opponents in rapid succession and earning the coveted designation: Outstanding Wrestler of the Tournament.  Phil Conigliaro secured first place in the 145 lb weight class with equal ease, effortlessly beating a talented Middlesex wrestler in his finals match by a mercy rule score of 17-2.  Wrestling at 152, freshman Colin Vallis gave Belmont Hill its third first-place finish with a pin in his finals match. Captain Sean Rayment wrestled up nearly two weight classes to wrestle at 160, and still managed to take home the silver medal–a truly impressive feat. Freshman Luca Pontone rolled his way to a first-place finish at 170, and Captain DJ Demetri battled his way back from an upset loss in the semifinals to take home third place while wrestling up to the 180 lb weight class. Also wrestling up a weight class (at 195), Will Ryan lost a heartbreaker in the finals and took second place. At 220, sophomore Myron

Duarte showed a lot of character wrestling up to one of the most difficult weight classes in the tournament, and still won the team several key matches as a sophomore in a senior and junior-dominated tournament.  And finally, senior Alex Afeyan won third place after an impressive victory over the St. Paul’s heavyweight in the consolation finals.

At National Preps, Pete Tedesco battled his way to an unbelievable second place finish–the highest of any single New England wrestler. Phil Conigliaro earned All-American honors for the second year in a row with a seventh place finish, and Luca Pontone was one victory away from being an All-American as a freshman. Also, Coach Leonardis was recognized at the tournament with the Assistant Coach of the Year Award–an honor well deserved and heartily supported by his team. Congratulations to Coach Leo and All-Americans Pete and Phil on outstanding seasons.

This was truly a historic season for Belmont Hill’s Varsity Wrestling Team. Seniors dominated as they were given one last go-around to showcase three years of dedicated hard work and improvement under the

masterful guidance of coaches Bradley, Leo, Davis, and Kaplan. Juniors grew into leadership roles over the course of the year and will be excellent role models for future Belmont Hill wrestlers coming up through the ranks. Sophomores battled and achieved as much as any other class and showed that this team is here to stay as a league powerhouse. Finally, the freshman class alone is already better than many full ISL teams and will be giving coaches around New England nightmares for years to come. On behalf of the entire wrestling team, thank you to those who came out to watch us on Wednesday and Saturday home matches, and thank you especially to those who came to watch or help out at the Graves-Kelsey Tournament. Thank you to coaches Bradley, Davis, Kaplan, and Leonardis, and thank you to everyone else who made this such an enjoyable and special season. Belmont Hill Wrestling is back on top and this team is showing no signs of slowing down.