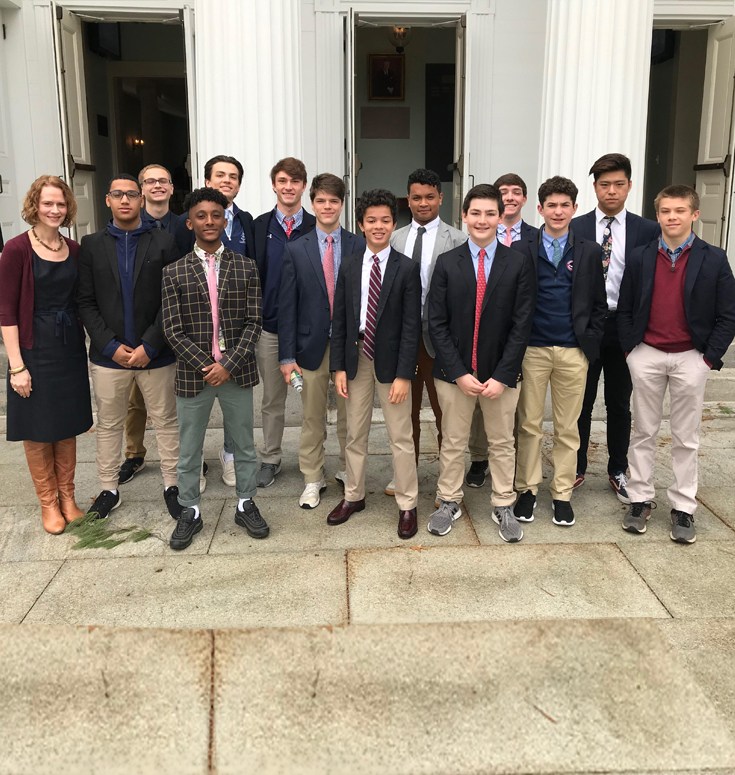 Poetry Fest kicked off this year with English teachers helping their students pick poems. After everyone presented their poems in-class, finalists were either voted by the students or chosen by the teacher to present their poems to Dr. Tift in the semifinal rounds. At the semis, Dr. Tift and Mr. Conway listened to each class’s finalists and narrowed 42 entries into 12 finalists. Then, in a long chapel, these 12 finalists presented their poems in front of the entire school. Those who were all selected to be finalists were:

Kevin O’Neill (VI): “I Want To Buy a Sloth with You” by Mo Lawrence

Hamza Shemsu: “Never Let You Down” by J-Ivy

Brathes Sanchez (IV): “What It Look Like” by Terrance Hayes

Daniel Bittner (III): “The Man with the Hoe” by Edwin Markham

This year’s recipients of the Distinctive Recitation Award were Daniel Bittner (III) reciting “The Man with the Hope” by Edward Markham, Renny Gong (V) reciting “First World Problems” by Chance the Rapper, and Brian Wilkins (V) reciting “i” by Kendrick Lamar. Their names will be forever inscribed on plaques.

Poetry Fest 2019 is Daniel Bittner’s (Third Former) third time being recognized for Distinctive Recitation in three years. This feat is extraordinarily uncommon, and, when he was asked whether he will attempt to get the recognition for six years, he responded, “we’ll see.” Even an experienced chapel reciter such as Daniel proclaimed that he was “nervous for the first few lines but after that, more calm and relaxed.” “The Man with the Hoe” by Edwin Markham is “a poem written to protest unjust labor earlier in America’s history.”

Renny Gong, a Fifth Form student performed a lyrical interpretation of a song by Chance the Rapper and even incorporated vocals into his lively performance. When asked if he was nervous before his vibrant performance, Renny responded, “I don’t think I was nervous at all, I had the poem down cold.” Also, when asked about his decision to include singing, he said, “I thought it’d be really cool to incorporate singing because I love to sing and just think that it would be so cool to do it as part of a poem”. According to Renny, “First World Problems” by Chance the Rapper is “like an indignant poem, he feels like he’s in the light with God.” We are sure that Renny’s recitation will be an opener to students who wish to try something different with their poems leading to even more exciting chapels in the future.

Brian Wilkins performed a rap song by Kendrick Lamar that made it into the Hot 100. The song goes into reclaiming the N-word by referring to “N-E-G-U-S definition: royalty; King royalty”. With a passionate delivery, Brian engaged the attention of the entire audience and recited his rendition of the song with perfect enunciation.

Aspiring Poetry Fest finalists may also ask how past finalists memorize a ridiculously long poem and not mess up on stage. When asked about this challenge, Daniel Bittner replied, “I did it over a long period of time so it wasn’t that bad” and “memorized a little bit each night.” Renny Gong says that “as long as you work hard on the memorization, you should be fine.”

Poem selection is also a very important part of Poetry Fest. Some students will spend hours on websites like www.poetryfoundation.org and www.poemhunter.com looking for the perfect poem to recite. Equally important is being able to embody the meaning of the poem through gestures, vocal inflections, and mood nuances.