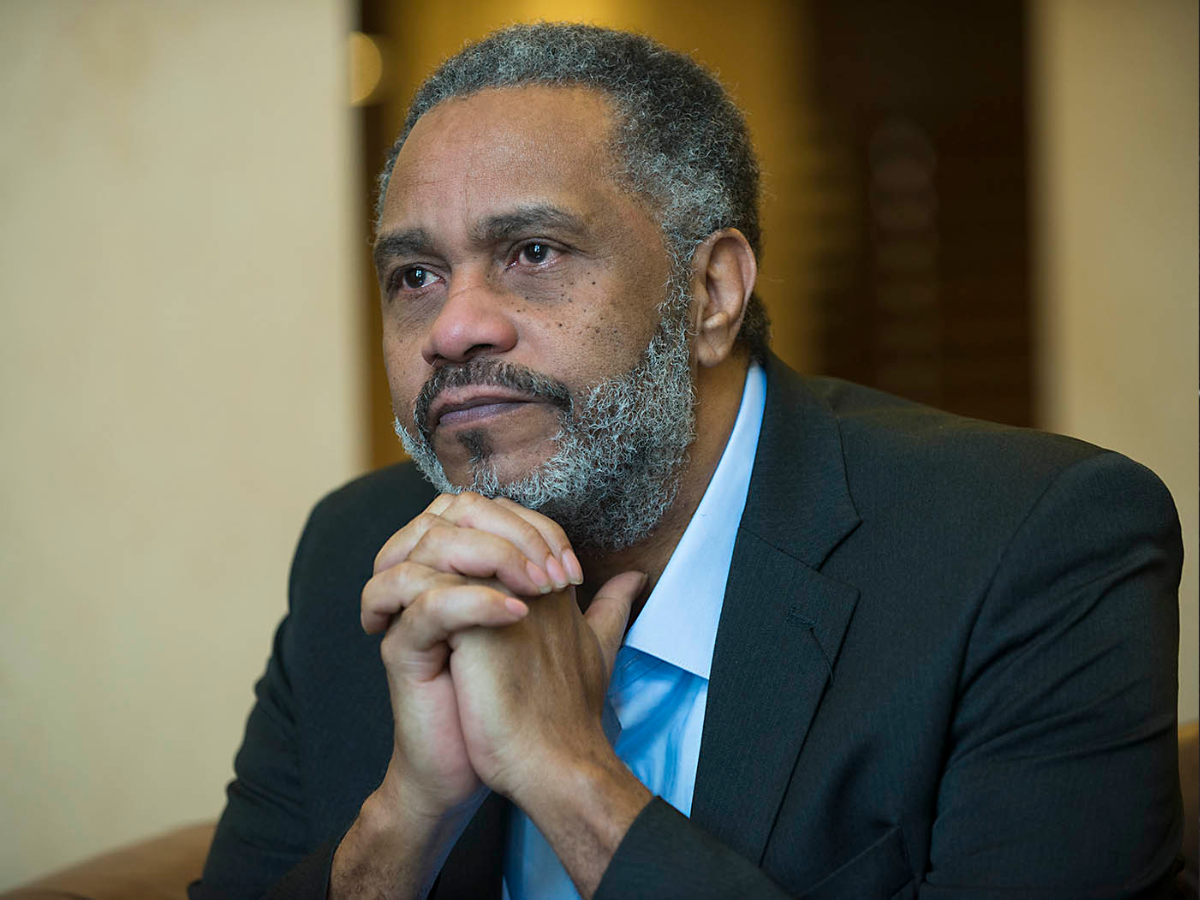 After reading Just Mercy by Bryan Stevenson over the summer and learning more about Stevenson’s work in running the Equal Justice Initiative and the death penalty in general, the Belmont Hill community was incredibly lucky to hear from two people close to Stevenson: Sia Sanneh, a lawyer at the EJI, and Anthony Ray Hinton, a man who was wrongfully sentenced to death row for 30 years for the murder of two men in Alabama.

Ms. Sanneh started the chapel by briefly discussing her pathway to the EJI and introducing Mr. Hinton with a clip of him on ABC’s Dateline, which showed Hinton’s incredibly emotional release from jail and reunion with his friends and family.

Next, Hinton stepped up to the podium and launched into one of the most powerful and thought provoking chapels in recent memory. He started from the beginning, detailing the hot summer day in Alabama where he was arrested while cutting his mother’s lawn before heading to church. Two detectives arrived with a warrant for his arrest without actually telling him the reason, and, before he knew it, Mr. Hinton was wrongfully detained for a crime about which he did not even know.

Quickly, the racial bias in the story appeared in his conversation with the detective: “I said ‘You get the wrong person.’ He looked at me and said ‘I don’t care if you did it or didn’t do it, but you will be found guilty’. I said ‘For something that I didn’t do?’ He said ‘You must have a hearing problem, I just told you I don’t care whether you did or didn’t do it,’ ”

Mr. Hinton then explained the pitfalls of the trial, and how the deck was stacked against him. He was given a public defender who complained about his mandatory pro bono work, the ballistic expert hired by his attorney was blind in one eye, and he was convicted solely due to the prosecutor’s ballistic expert’s testimony that the bullets at the scene matched his mother’s gun at home.

However, Mr. Hinton knew the real reason he was convicted. As the police officer who arrested him explained: “Number one, you’re black. Number two, a white man is going to say you shot him, whether you shot him or not, I really don’t care. Number three you’re gonna have a white prosecutor. Number four you’re gonna have a white jury. Do you know what that spells? Conviction.”

Mr. Hinton then described the depressing conditions of his thirty years living on death row; he lived in a 5 feet by 7 feet cell with only a bed and a toilet. For the first three years, Hinton was unable to speak, and he only began speaking to console his crying cell mate. However, he soon began adapting to life in prison with his vivid imagination and using his mind to travel to anywhere besides death row.

After years on death row, Hinton was approached by an attorney working for Bryan Stevenson who was trying to stop capital punishment. Although touched by the approach of an attorney, Hinton fired the lawyer after the lawyer recommended Hinton plead guilty and accept life without parole; Hinton decided he could not confess to a crime he didn’t commit.

After learning more about the EJI and Stevenson’s work, Hinton realized that he could be exonerated for his crimes altogether and wrote Stevenson a letter, requesting that Stevenson look through Hinton’s trial transcript. Shortly after, Stevenson replied and began working to free Hinton.

For years, Stevenson worked on the case and appealed it in multiple Alabama state courts, but the pair found that the racism in the Alabama judicial system was prevalent, as no judge would hear the case. The attorney general said: “It would only take one hour to reexamine those bullets. It would be a waste of taxpayer money and a waste of my time. I am convinced that the right man is on death row.” The state’s dismissal of Hinton’s case at this point cost him another sixteen years of his life before being released, and his mother, who he said was incredibly close to him, also passed away during this time period.

Eventually, they appealed to the US Supreme Court, and all nine justices ruled that the state must grant Hinton a retrial. In the retrial, the state eventually dropped the case after the very ballistic expert who had put Hinton behind bars nearly thirty years prior  “He came and he examined the bullets and, I quote, he said ‘I do not see what I saw thirty years ago.’ But he saw the exactly what he saw thirty years ago, and that’s that the bullets didn’t match then and they didn’t match later.” Shortly after, the prosecution dropped the case and freed Mr. Hinton.

Since being released, Mr. Hinton discussed how much he enjoys newfound freedom and space, such as his California king bed. He also spoke to how much the world had changed during his time on death row, explaining his shock when, while driving out from prison with his friend, he first heard a GPS giving directions and thought there was a woman somewhere in the car.

Mr. Hinton’s story, while incredibly tragic and a testament to the flaws in the justice system in the country, was also full of hope and resilience in the face of adversity. The chapel was a phenomenal way to truly comprehend the death penalty and its ramifications and to learn more about Mr. Stevenson’s work outside of Just Mercy and to empathize with someone who lost thirty years of their life to a wrongful conviction.