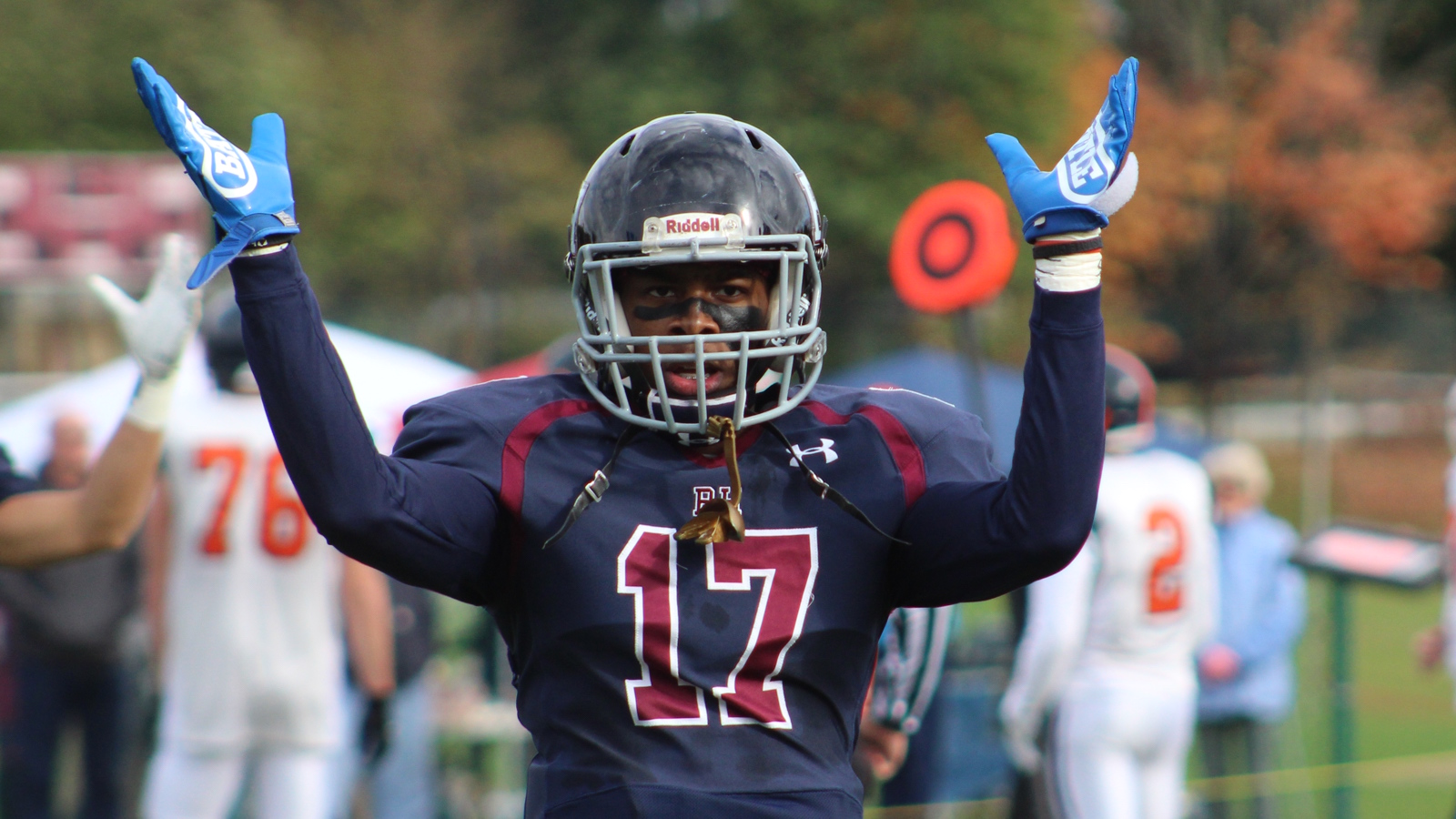 Now in his fourth season with Belmont Hill’s varsity football team, Senior Justin O’Neil-Riley has proven himself a crucial contributor to the team’s great season. In truth though, Justin’s career began some thirteen years ago, at the age of five: “I started playing organized football when I was five years old. My mom had a friend named Clinton, and he coached for the Dorchester Eagles.” Reflecting on his career to date, Justin believes that, in addition to Clinton, he has benefited from the advice of a number of other role models, saying, “I grew up being coached by a man named Chuck Farrell. He’s still pretty close. He’s a close person to me and a very important figure in my life. In terms of being a role model, he was certainly one of those people, as well as my older brother.” Within the Belmont Hill community, Justin has high praise for the football team’s coaching staff, observing, “honestly, I have to give props to Coach Butler, Mr. Curran, Mr. Sullivan, Coach Glor, Coach Anam, and all of the coaches that have helped me. Those guys put in a lot of work with our skills players. Everything that they do, and that they teach, all throughout the years has stuck with the team.”

Beyond his work on the football field, Justin has played for Belmont Hill’s basketball team, where he can be seen working as a manager, and running track in the Spring, taking part in the 100 meters, 200 meters, 4 x 100 meters, and long jump events. Despite his remarkable success as a high school athlete, Justin’s highlight, at least with regard to the football team, was what most would consider a clear failure: “I can honestly say that the highlight within my high school career was definitely going 1-7. It sounds weird, but the year after that we ended up going 7-2 and winning a championship, which honestly was unexpected, but we worked hard that summer. Even the year before that, we didn’t really know where we were going to go as a team, in terms of what we were capable of.”

Since joining varsity football, Justin has carved out a role for himself in three separate positions, a testament to his versatility, flexibility, and team-first mentality. Whether he’s eluding defenders as a shifty receiver, picking off QB Mike Piazza in practice as a defensive back, or returning a punt for a touchdown in the homecoming game against Milton as a return specialist, #17 is sure to catch the crowd’s eye. Ultimately, while Justin enjoys all the ways in which he contributes to the team’s success, he does have a certain affinity for the return game: “Honestly, I can say that being a returner is most comfortable to me, because once you get the ball, you’re free and you just go.”

Looking ahead to next year and his career beyond Belmont Hill, Justin eagerly anticipates his opportunity to play football at Trinity College. Justin aims to bring the same determination and commitment that have come to characterize his play in recent years, explaining, “my top goal is to be an impact player as soon as I get there. I’ve been in contact with the coach, just trying to make sure we’re on the same page, and letting him know that I’m going to be there for four years, working hard. Regardless of the outcome, I just want to be a part of that team. I think it’s a pretty cool experience up there.”