Belmont Hill Crew Makes Efficient Use of Time in Sarasota

Belmont Hill Crew Makes Efficient Use of Time in Sarasota 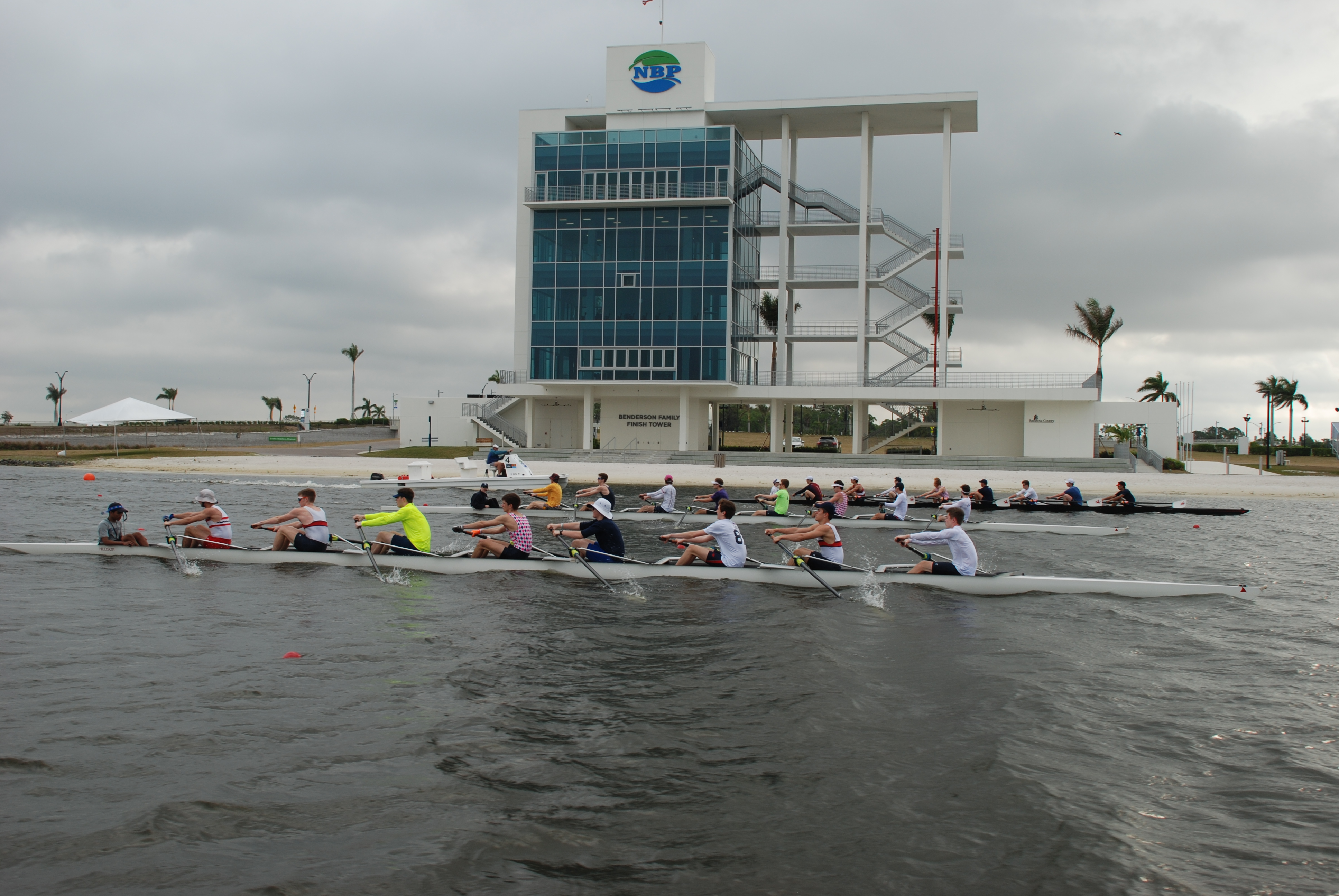 During the second week of March break, Varsity Crew traveled to Sarasota, Florida for a weeklong training trip. A welcome contrast to last year’s March practice-30-degree weather with freezing rain and snow- the warm Florida sun proved a nice upgrade and was much appreciated by rowers and coaches alike. Alas, the wind often proved a problem; the morning before a tornado was forecast to sweep through, and one boat was actually picked up off the rack, flipped and tossed onto the ground. This meteorological entertainment did not, however, keep the team from hard work. The coaches orchestrated a grueling and effective training program that maximized the time available. Waking up at 7, the team ate breakfast courtesy of Dayspring Conference Center and then headed down to the former Rowing World Championships course for an early practice. With few other boats out on the water, the team moved swiftly and could race up and down the lake without disruption. After the two-hour practice, the team traveled back to the Episcopal Center Reservation to enjoy lunch and some much-needed downtime before an afternoon practice.  On the first day, the boys did not foresee the need to conserve energy for the afternoon and partook in a little basketball and swimming. They soon learned their lesson and, after that, almost everyone spent the few hours between practices sprawled out on their beds. Then, around 1 o’clock, the team hopped back into vans to go down to the lake. Another two-hour practice full of two-thirds, three-quarter and full pressure pieces awaited them. For those who don’t row, the difference between two-third pressure and full pressure is minuscule. After the second practice, the team returned to home base for dinner and fun team bonding watching March Madness basketball, Netflix, and an Irish documentary about their first Olympic rowers. Though practices were certainly difficult, the team found time for enjoyment with visits to Siesta Key Beach and a go-karting arena. Even Coach Richards joined in on the fun! The trip proved to benefit both athletic performance and team bonding.

Some other Belmont Hill teams have found the same benefits in trips at the beginning of the season. Two Fall teams found those gains in August: part of the Cross Country team went to the Dartmouth Gold Medal Running Camp and the Soccer team traveled down to Costa Rica. Matthew Goguen, future Cross Country Captain for the 2018 season, extolled his time at Dartmouth: “It gave me the mindset of continuously working hard day in and day out. Although 14 miles of running may seem daunting, it honestly helped me in the long run. Plus, three hours of spike ball a day was pretty fun.” Clearly, the crew excursion isn’t an anomaly in the perks of pre-season trips.

Other teams should take note of the effects of such intense trips at the beginning of a season. Coach Richards often repeats how the spring season is only about 10 weeks, but the week spent in Florida has made the team feel as if it’s been together for months despite the racing season just beginning. If more teams adopt for pre-season trips, Mr. Tahan may have even more trouble finding space in the already overflowing Jordan trophy case.