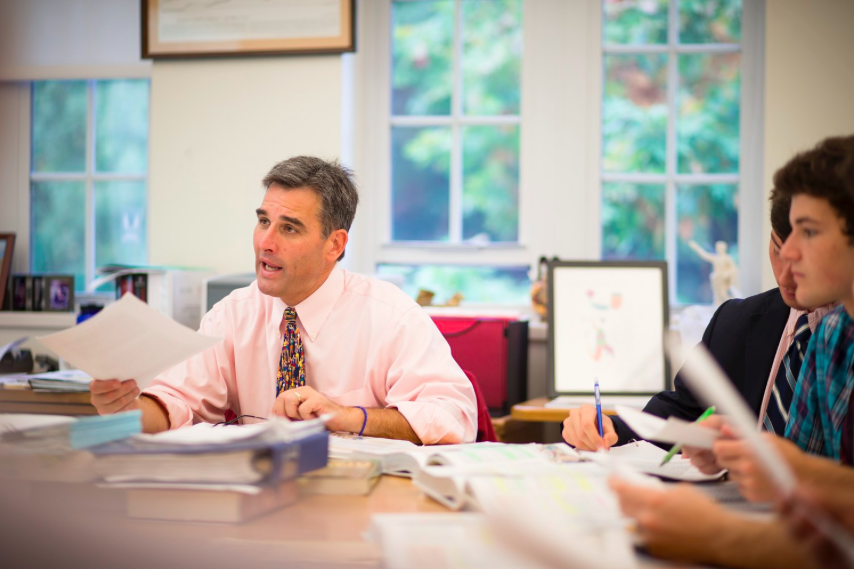 Belmont Hill students dominate the playing fields. This aspect of the school attracts a variety of young teachers, many of whom competed and excelled at a serious level. In light of these outstanding accomplishments, the Committee of Faculty Athletic Rankings (a one-person committee: yours truly) has recognized ten teachers. The criteria used to evaluate faculty members consist of the following: difficulty of sport (i.e., popularity in U.S./competition pool), success attained, and continued athletic prowess.

“People say he was less than a god but more than a man.”- Benny “The Jet” Rodriguez

After pitching at BC High and Holy Cross with incredible skill, Kirby came to the Hill prepared to coach one of his favorite sports; however, there were no coaching availabilities, so he opted for track. He revived the program, leading the team to over 300 wins. Kirby’s feats as an athlete, though, seem to grow with every passing year. He hit a ball over the dorm. He could bench all of the weights in the old gymnasium (thanks to Darren Sullivan ‘87 for those tidbits). Kirby remains perhaps the best faculty athlete in the School’s history.

Glor played four years of wide receiver for the Hoyas after turning down the option of playing both basketball and football at Williams. Teaming up with Kyle Nolan, now an NFL practice squad player, Glor solidified his position as a starting WR during his last two years, cultivating in the best game of his career: nine catches, a touchdown, and over 100 receiving yards in a loss to ranked Fordham.

As an All-American in both cross country and the 1500m in her sophomore year, O’Connor led the Ephs to the NCAA Championship in both sports. With a blistering sub-17 5k, O’Connor could have earned even more accolades without an injury during her junior year; however, she returned in her senior year and ran her best-ever 1500m and resumed her status as an All-American.

After walking onto the team, Davis had to beat out five recruited wrestlers at perhaps the toughest weight class, 132, to break the starting line-up. With an unbelievable work ethic, examples of which include waking up at dawn to run and then attending classes, Davis earned his spot in the truest sense of the word. His teammates rewarded him with the captainship in his senior year, and he responded by pinning wrestlers from all other Ivy League teams.

As the Gatorade Track Athlete of The Year from the Granite State, Vailas joined the Dartmouth running teams as the owner of the New Hampshire mile record holder. After watching her perform admirably various relays, Vailas’ coaches designated her as the youngest captain in Big Green history. She ran a 2:08 800m and 4:24 1500m, both of which merited all-league. Ultimately, she and Olympian Abbey D’Agostino led the track team to the Heps championship, one of the first in the team’s history.

Montoya played four years for the Eagles, making All-Big East in his junior year and being elected captain in his senior year. As a professional, he joined the Boston Bolts, the precursor to the Revolution, where he earned team MVP honors and led his squad to the finals. Montoya competed against and defeated a plethora of top-notch strikers, including World Cup champions Osvaldo Ardiles and Rudi Voller.

As a starting center for the Polar Bears, Martin held many of the scoring records when he graduated; had he been permitted to play in his freshman season (this rule was changed in 1968), many of his records would have stood to this day. Still, Martin became the first player in Bowdoin history to record over 1,000 points, and he was elected captain his senior year. Martin tried out for the Buffalo Sabres, playing alongside future Hall of Famer Gilbert Perreault and performed well; however, he decided that the NHL life did not agree with him. Mr. Martin coached the BH varsity team for thirty-nine years and retired with an astounding 707 wins, making him the winningest high school coach in the state.

After winning the Most Outstanding Wrestler award, given to the best prep school wrestler in the nation, twice, Leonardis took his talents to Chapel Hill. A four-year starter, he won 110 matches, beating thirteen All-Americans in the process. As an ACC champion, Leonardis qualified for the NCAA’s multiple times, nearly winning the whole tournament.

Even though William and Mary has never reached the NCAAs known as March Madness, Cofield dominated his conference, becoming somewhat of a paradox in the process: an RL student good at sports. As the Rookie of the Year in the CAA, Cofield played against Ray Felton, Rajon Rondo, and a whole host of other NBA players during his four years. Cofield earned all-conference in all four years.

After an outstanding career at Belmont Hill, McCarthy brought his skills to a small liberal arts college in Cambridge, MA. At Harvard, he lined up as both a defenseman and center, and his teammates rewarded both his versatility and dedication to the team with the captainship. After graduating, McCarthy travelled abroad, lacing up in Russia, Slovakia, Sweden, and the AHL.

On his soccer team, Brownell lined up at midfield; in hockey, he skated as a center; he played first base for the Ephs. On each of his teams, Brownell participated fully, dominating the pitch, the rink, and the diamond. His peers, recognizing his elite talent, named him the best athlete at Williams. Brownell led his hockey team to the ECAC championship multiple times, attracting coaches from both the States and abroad. As an adult, Brownell picked up squash as a casual activity; he proceeded to become the best squash player for his age group on Earth. Simply put, even some current professional athletes’ accolades pale in comparison to Brownell’s athletic career, and he stands alone as the best faculty athlete at Belmont Hill.