BH Soccer Closes out the Season with Class As

BH Soccer Closes out the Season with Class As 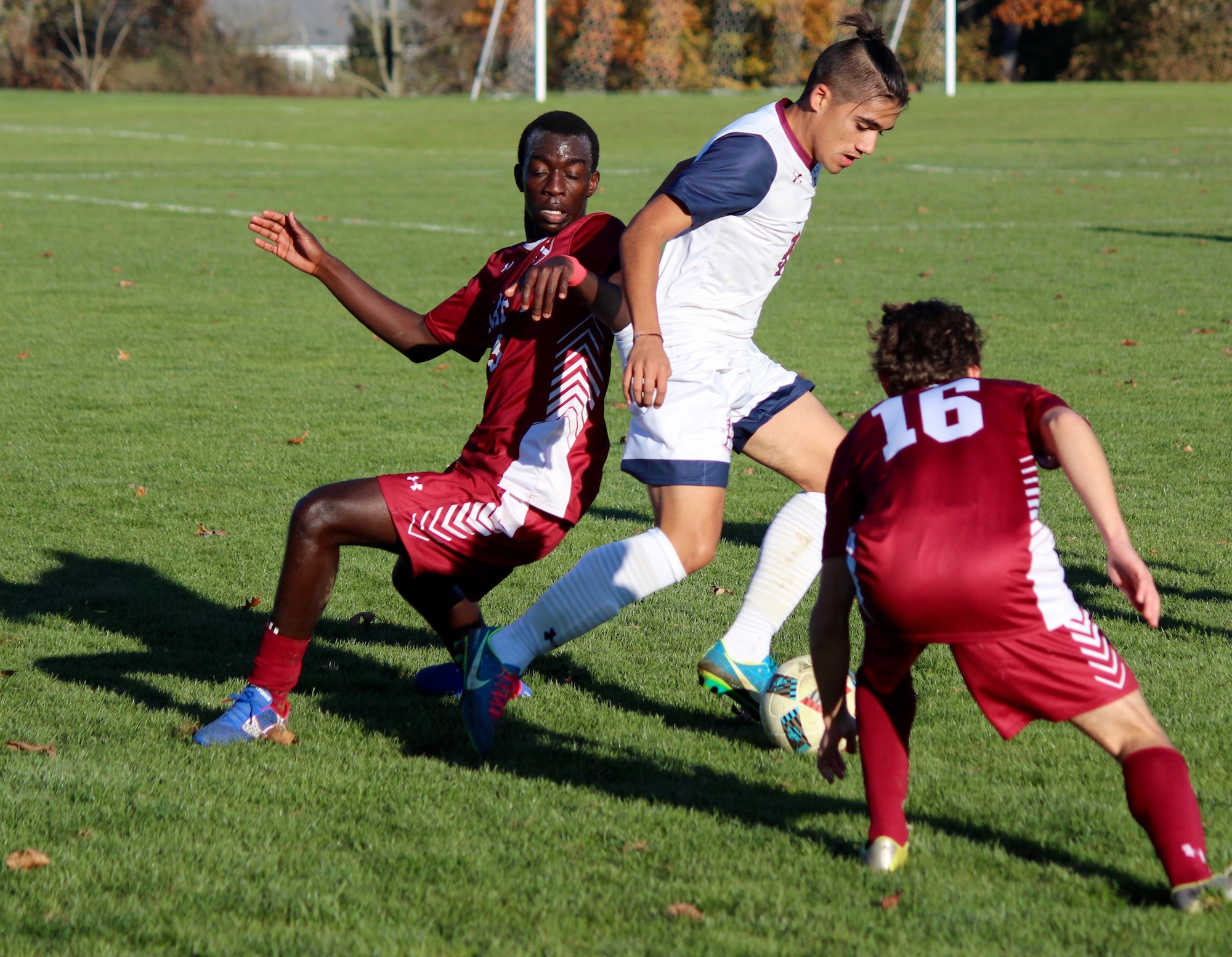 Belmont Hill entered this year’s New England Class A soccer tournament as the sixth seed of eight and was slotted to play Taft on Wednesday, November 15, in Watertown, Connecticut. The two-and-a-half hour bus ride provided players with ample time to prepare and rest, and the team arrived at Taft’s campus at around 1:00, amped for the upcoming match.  Jogging, stretching, shooting, and finally passing concluded warm-ups, and the team was ready to go. Although the icy November wind was brisk, the sun remained out for most of the game, and the players seemed relatively unaffected by the temperature. The first half, although intense, ended in a 0-0 draw, in which both teams had great chances. James Cahill ‘20 made several key saves, including three off of one corner play, that kept Belmont Hill in the game. Additionally, the defense, led by captains Jack Bell ‘18 and Brian Antonelli ‘18, remained strong, holding their positions and forcing the Taft forwards to turn the ball over. Up top, Matthew Goncalves ‘20, Leighton Dolan ‘19, and Oisin Treanor ‘18 kept high pressure on Taft’s keeper, creating numerous chances.

By halftime, Belmont Hill knew that this game could go either way, and it was entirely dependent on execution and effort. The second half started similarly to the first, and not until 17 minutes in did either team score. Taft was able to get on the board first in the 64th minute with a solo goal. Number 11 from Taft received the ball near the 18-yard box, played a one-two with their wing, and scored a well-placed strike. Seven minutes later, Taft’s attacking midfielder had

an open shot on the edge of the box and buried it, making the game 2-0 with just over 20 minutes to go. Goncalves, after receiving a pass from Ben Ward ‘19, was tripped up five yards outside of the Taft box, presenting him with an opportunity to cut the lead in half. Characteristically, he placed his shot to the left side and scored with only 17 minutes remaining. Less than four minutes after, Goncalves went on a solo run down the left side, beating his defender and blasting his shot near-post; the goalie had no chance of saving it. Everyone, including the bench, was fired up, as Belmont Hill now held all of the momentum. Unfortunately, Taft received a deflection of one of their shots that found its way into the back of the net with under ten minutes to go. The team continued to fight hard, but the final whistle blew, and the season came to an all-too-sudden close.

Belmont Hill had their best result yet after going to the tournament three years in a row. They had never been higher than an eight seed until this year, and hope to reach an even higher seed in years to come. This game capped off an incredible season, in which the team fought through remarkable amounts of adversity. Belmont Hill has now finished top-3 in ISL play four years in a row, which no other team has done recently, and hopes to take home the title in the next few years. Although the loss of seven seniors, three of whom are starters, will be difficult to overcome, the team is relying on returning talent to carry the torch. Captains Leighton Dolan and Mikey Montanaro (both ‘19) will look to avenge any losses from this year, including Rivers and Brooks, and will hope to make a deep run into the New England Playoffs next year.