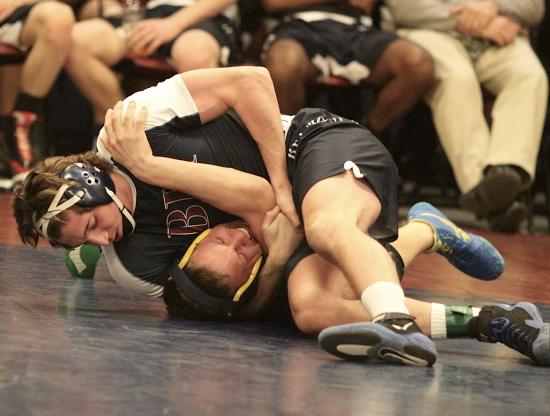 0-0, 2-0, 5-0, 8-0…. The Belmont Hill wrestler effortlessly racks up points on his competitor. Then, BZZZZZZZ, 15-0. Midway through the third period, the BH wrestler has teched his opponent, earning his team another 5 points, but there is no applause. His coaches and teammates expect pins. Nearly undefeated, with a record of 15-1, the Belmont Hill wrestling team has continued their reign of dominance in the 2017-2018 wrestling season.

The wrestling team roared out of the gates with several strong victories, achieving huge wins against BBN (54-26), Milton (71-10), St. Paul’s (58-19), Lawrence Academy (66-18), and Thayer (63-15) throughout the course of the January season. Their first real competition came in the form of Roxbury Latin, a longstanding wrestling rival and sturdy opponent in the ISL. On January 20th, the wrestling team participated in a quad meet against RL, Loomis Chaffee, Tabor Academy, and Phillips Andover, reigning victorious throughout the day with a relatively close 43-33 victory over Roxbury and clear victories against the other three teams. The following Wednesday the team thumped Middlesex with a 76-6 victory, with Middlesex’s only 6 points coming from a forfeit.

Participating in the annual New England Prep Dual Meet on January 27th, the wrestling team faced their toughest adversary yet — Northfield Mount Hermon. Renowned for their strong wrestling program, NMH gave the Belmont Hill wrestlers a battle in a match that eventually ended in a tie. Hermon gained the victory through tie criteria, and although the loss was disappointing, Belmont Hill went on to defeat Phillips Exeter, another formidable opponent, and Long Island Lutheran over the course of the day.

Led by captains Seth Israel, Luca Pontone, and Phil Conigliaro (who won second place at December’s prestigious Beast of the East tournament), and boasting an intimidating team with depth at nearly all levels, the Belmont Hill wrestlers are looking to make a mark this season. With the Graves Kelsey and New England Prep tournaments on the horizon, the team will train hard under coaches Bradley, Leonardis, Davis, and Kaplan to achieve their season goals, which, with such a strong roster, seem auspicious.