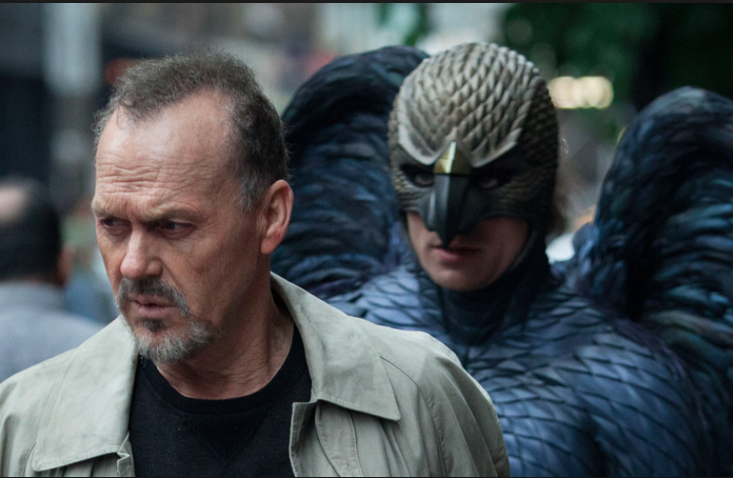 From start to finish, director Alejandro G. Inarritu and his strong cast of actors dazzle in Birdman or (The Unexpected Virtue of Ignorance). In the movie, Michael Keaton plays Riggan Thomson, an actor once famous for starring in several movies as the superhero Birdman. In an attempt to revitalize his fading career, Thomson mounts an ambitious Broadway production that he writes, directs, and stars in. As opening night comes closer, a castmate suffers from injury, and Thomson is forced to find a replacement for the supporting role and hires Mike Shiner (Edward Norton), a passionate and renowned performer who challenges Thomson’s authority and credibility. Thomson is constantly overwhelmed with the stresses of running a performance, his broken relationship with his ex-wife (Amy Ryan), his drug-addicted daughter (Emma Stone), and the host of critics and surrounding characters who doubt and question him throughout. Yet, as Thomson fights to stay relevant to the rest world, his biggest obstacle is himself in the form of Birdman, a pessimistic alter-ego who fills Riggan’s head with thoughts that drive him to the edge.

Keaton’s performance strays from the likes of his usual characters, such as Batman in Tim Burton’s Batman, and the personable leader of the justice-seeking team in Spotlight. As Thomson, Keaton increases his range and adds newfound emotion to his most complicated character yet. Interestingly enough, one could consider Thomson as a reflection of Keaton: both are actors past their prime and both played superheroes, Birdman and Batman, respectively. I just hope that Keaton does not continue to follow the storyline of Thomson.

While many of the actors put on their best showing, it is Inarritu who deserves the majority of the credit. The film is set up as one, continuous shot that spans the days leading up to opening night. This technique accurately portrays the non-stop turmoil of the show business, and also of a life spinning rapidly out of control. Accompanied by the single take is the background percussion that adds to the chaos and New York flavor. This feat of cinematography magnifies an already spectacular film, and the result is one of the greatest movies of the past few years, if not the decade.