BH Students Greet 4500+ Families to Christmas in the City

BH Students Greet 4500+ Families to Christmas in the City 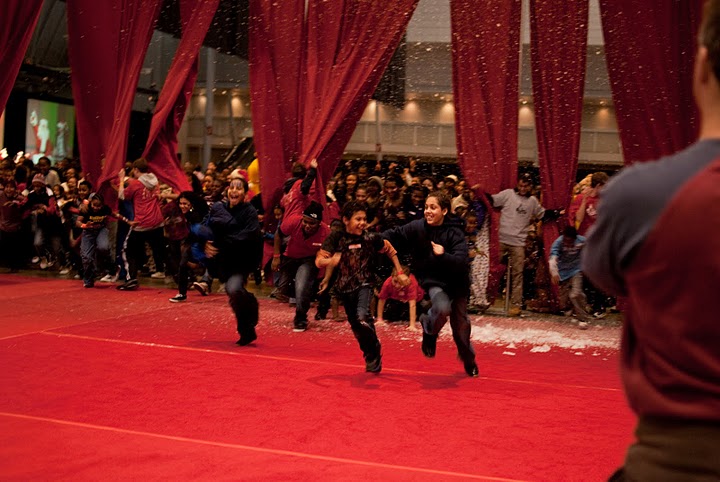 Christmas in the City started off as a small family tradition that provided a Christmas party with decorations, games and a meal for approximately 165 mothers and children in the Boston area. Founded by Jake Kennedy, Christmas in the City relied initially upon only donations from family members, friends, and coworkers to provide presents for families in need. However, this small, non-profit organization quickly expanded, and in 2010, it provided a festive Christmas spirit, including live entertainment, games, rides, and a petting zoo, for over 3000 families from nearby homeless shelters. Additionally, Christmas in the City distributed toys and gifts to almost 2000 families who were not able to attend the event. As this philanthropic venture has grown, the need for volunteers has dramatically increased as well.

On December 20th, a small group of students led by Ms. Zener, left the Belmont Hill campus for the Boston Convention and Exhibition Center to volunteer for Christmas in the City. Last year, the Belmont Hill volunteers contributed the day before the actual Christmas in the City event, painting wooden Christmas trees to create a festive atmosphere for the event itself. However, the 2015 Christmas in the City group was responsible for transitioning the participants from their buses to their correct spot within the convention center. With 170 school buses to accommodate, the organization of different groups was a crucial job, especially in a giant convention center.

For two and a half hours, many Belmont Hill students personally greeted and led the incoming attendees into the fantastic Christmas in the City layout, which this year featured booths run by Museum of Science, the Museum of Fine Arts, Boston Children’s Museum, Zoo New England and the New England Aquarium. The event also featured a climbing wall, gingerbread houses, and a special appearance from Santa and Mrs. Claus. Christmas in the City also set up a job fair for the parents attending, so that any unemployed parents could start to get back on their feet. Overall, the 2015 Christmas in the City, with the help of many Belmont Hill volunteers, provided a meal, presents, and most importantly, a jovial atmosphere for over 4,500 families, so that they could have an enjoyable Christmas.