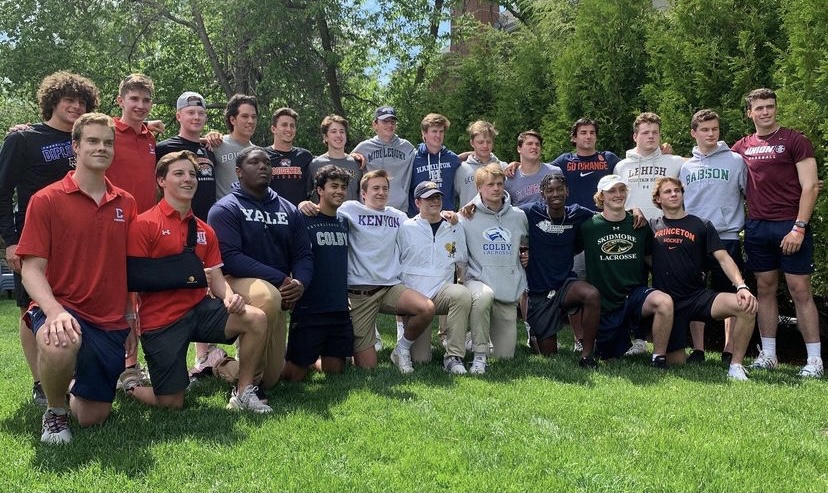 Although the final year of sports for the 2021 Senior class was inevitably abbreviated, their athletic legacy in terms of both their overall leadership and outstanding accomplishments was nonetheless distinguishing. Displaying incredible perseverance and persistent dedication to their respective sports, these seniors were constantly admired by individuals throughout the rest of Belmont Hill for their exemplary poise and attitude. Yet in addition to their unparalleled leadership, the class of 2021 also achieved numerous championships and other accomplishments that will forever be remembered throughout the school’s history. Although these seniors would have undoubtedly accomplished many more feats had there been a final year of athletics, below are some of the many athletic achievements that this year’s departing seniors won over the two prior years:

In the fall season, the class of 2021 seniors contributed to numerous championships across Belmont Hill’s three fall sports. While the football team achieved the monumental feat of becoming both ISL and New England Champs in the fall 2018 season, the soccer team completed a remarkable season in 2019 by finishing third in the ISL and qualifying for the NEPSAC Class A Championship Tournament. Additionally, the cross country team achieved multiple top-10 ISL finishes.

During the winter season, this year’s departing seniors contributed to one of the most successful athletic stretches in school history. While the hockey team captured the school’s 18th Lawrenceville Tournament Championship in 2020, the basketball team had multiple ISL All League honorable mentions and Joshua Baldwin was named ISL All League in 2020. Additionally, the two skiing teams experienced unprecedented runs of success, as the alpine skiing team won two consecutive ISL championships and the nordic skiing team captured two straight Lake Region Nordiic Skiing Championships. Meanwhile, the squash team won two ISL championships and the wrestling team won ISL and New England championships in 2019 and 2020.

Although spring sports were only able to have one full season with the pandemic preventing normal play the past two years, Belmont Hill has seen the 2021 senior spring athletes become some of the most talented in recent memory. During the 2019 spring season, while the baseball team won an ISL championship, the lacrosse team had a combined 8 players named all-league and all-league honorable mentions in 2019 while going undefeated in ISL scrimmages this year. The crew team also experienced immense success by winning the Basset and Ducey cups as well as becoming NEIRA champs in 2019. Furthermore, the golf team won the ISL Kingman cup, the sailing team won the Massachusetts State Championships, and the track team won the ISL and New England Championships during the 2019 season.

Overall, the streak of championships and distinguished athletic accomplishments achieved by the 2021 seniors is unprecedented and remarkable, especially considering the Belmont Hill teams would have won many more feats had their last year of competition occurred. Nevertheless, although this list of team and individual successes is lofty, the class of 2021’s athletic legacy will be distinguished most of all by the examples of sportsmanship, leadership, and dedication that each senior athlete constantly displayed. The Panel congratulates every senior athlete for their athletic accomplishments and superb leadership throughout their time at Belmont Hill.