Community Service on the Hill Starts Strong in 2016

Community Service on the Hill Starts Strong in 2016 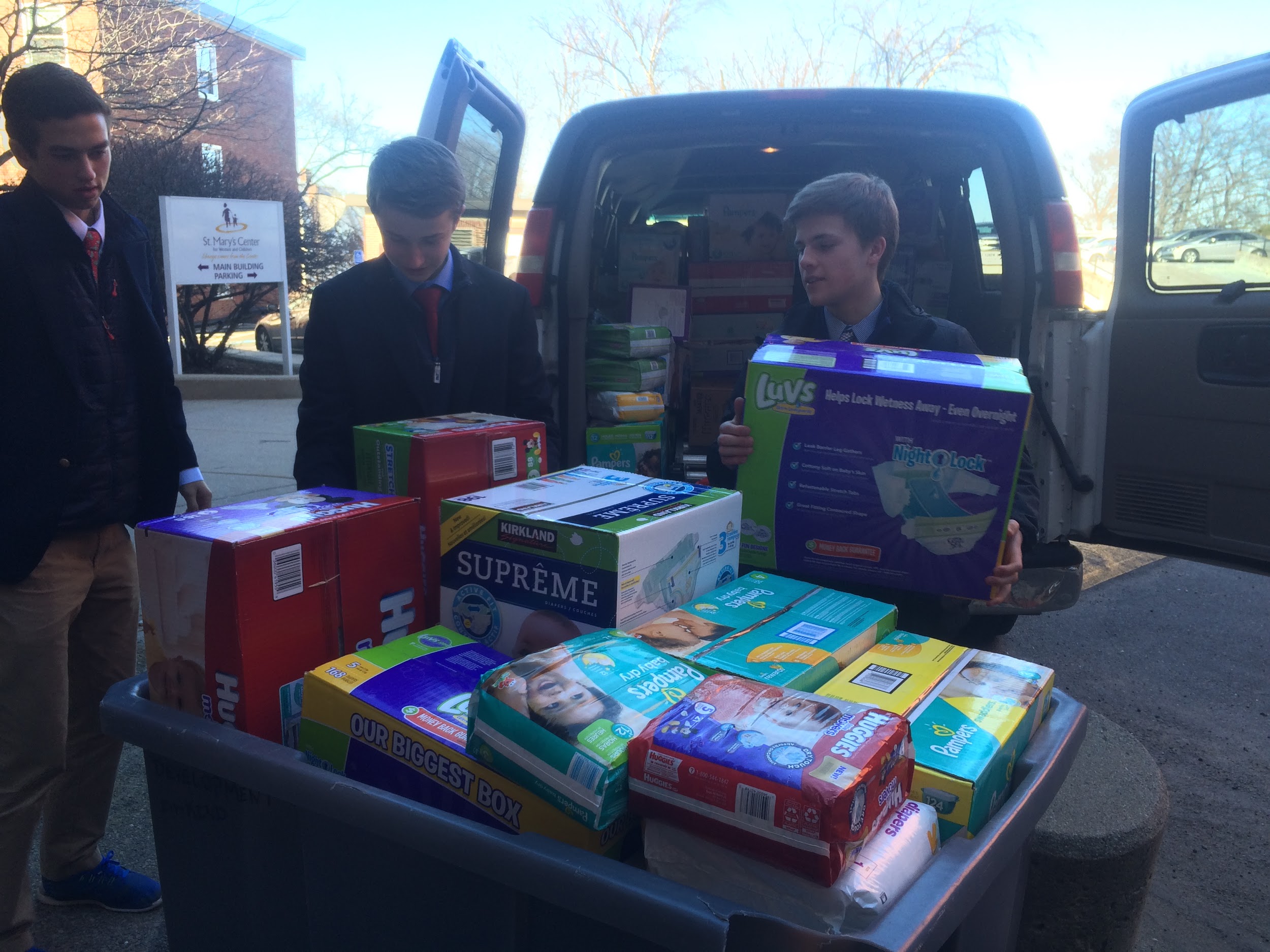 Amidst school days brimming with academic, athletic, and extracurricular commitments, 2016 has been an extraordinary year for Belmont Hill’s community service programs. Coming off of a strong first semester of community service, the group had high expectations to uphold at the start of the second semester: from the Blood Drive and Diaper Drive in February, to the Cereal Drive and Community Service Trip (at Stanislaus National Forest, California, this year) in March, not to mention the year-long Meadow Green and Work Crews, many hands were needed to take care of the plethora of jobs in order to ensure yet another successful year of service on the Hill.

With the switch from the Red Cross to the Kraft Family Blood Donor Center this past November, the “Blood Mobile” was back in the academic quad this Leap Day, with yet another great turnout of students and faculty. With the Fall blood drive committee (Patrick Connor ‘18, William McCormack ‘18, Ben Lebowitz ‘16, Bhawramaett Broehm ‘16, Ishaan Prasad ‘18, Antonio Ubeda ‘18, Jake Carter ‘18, Frank McField ‘16, and faculty advisor Mr. Sweeney ‘83) reprising their roles this spring, the group looked to encourage boys to donate blood and platelets to those in need. As Patrick Connor ‘18 maintained when asked about the future of the program:

“We had a great group of boys this year and great leadership from the senior class. With so many boys returning to the program next year, it’s clear that the drive is in good hands.”

Established in February of 2013 by alumni Evan Chaletzky ‘15, Alex Santangelo ‘15, and Colin Ward ‘15, the diaper drive was an effort led by the class to honor the passing of Colin’s mother. With the family wishing to donate to the Shrine of St. Anthony in Boston, MA, the boys learned that the organization was in need of diapers, thus beginning the annual tradition of the Belmont Hill diaper drive. Meeting their initial goals of 2500 diapers in 2013, and 5000 diapers in 2014, by their 2015, final year on campus, the school collected more than 12,400 diapers, surpassing their goal of 10,000 diapers by a sizable margin. This year the drive was spearheaded by Frank McField ‘16, William McCormack ‘18, and Jake Carter ‘18; while the boys were hesitant to set a goal this year, the drive exceeded all expectations, with the school donating nearly 10,500 diapers. As Jake remarked,

“This year was an incredible year for the drive, especially coming off of such a great couple of years with the Class of 2015. With such a great showing this year, it’s clear that the school clearly is invested in maintaining the drive for years to come.”

This year’s diaper drive was also notable for its innovations in ordering diapers, as Will explained, “This was the first year students, faculty, staff, and alumni could order boxes of diapers through Amazon and have it directly sent to the school. We hoped that this would make it easier for people to donate diapers without going out of their way to buy them. Overall,” he ended,

“we’re very happy that we kept the drive’s momentum up this year, and in the future we hope to hit 12,400 before we graduate, while also identifying another younger student to pass the torch and continue the drive.”

Coming up this spring, the class-of-2018-led Cereal Drive is returning to campus. Having spent the beginning of their second form year donating “no-dessert day” money to the Pine Street, in Boston, MA, cereal drive leaders William McCormack ‘18 and Jacob Carter ‘18 decided to strengthen the relationship between the organization and Belmont Hill after hearing more about the Pine Street Inn’s mission through fellow classmate Jared Stier ‘18. Talking to the Director of Community Outreach, Mr. Jack Nolan, the boys learned that cereal is always needed at the inn. With

more than 70 pounds, or 200 bowls, of cereal being consumed each day, Pine Street annually spent more than $60,000 of their funds on cereal; money that could have instead been used to expand their program. “After hearing these crazy facts on cereal,” McCormack noted, “We figured that we could donate the cereal they needed allowing them to focus on their other efforts, including their newly-formed street outreach program, which administers aid to people in need.” Hoping to take advantage of the competitiveness of the community to incrementally increase their goal, by the end of Class-of-18’s sixth form year, the group hopes to donate more than 1,000 boxes.

With spring break fast approaching, this year the community service group is heading to the west coast to help out in the Stanislaus National Forest in California. As Jake Carter ’18, a member of the trip, related:

“With the primary intention of planting trees, and with the recent forest fires, this mission is really one of the utmost importance. Every year there is always so much that we can contribute — so much we can do — and every year it is an incredibly fulfilling and rewarding experience.”

With so many other exceptional community service efforts by members throughout campus, the final quarter of school is sure to be chalk-full of initiatives that will inspire and aid the Belmont Hill community, along with our greater community.