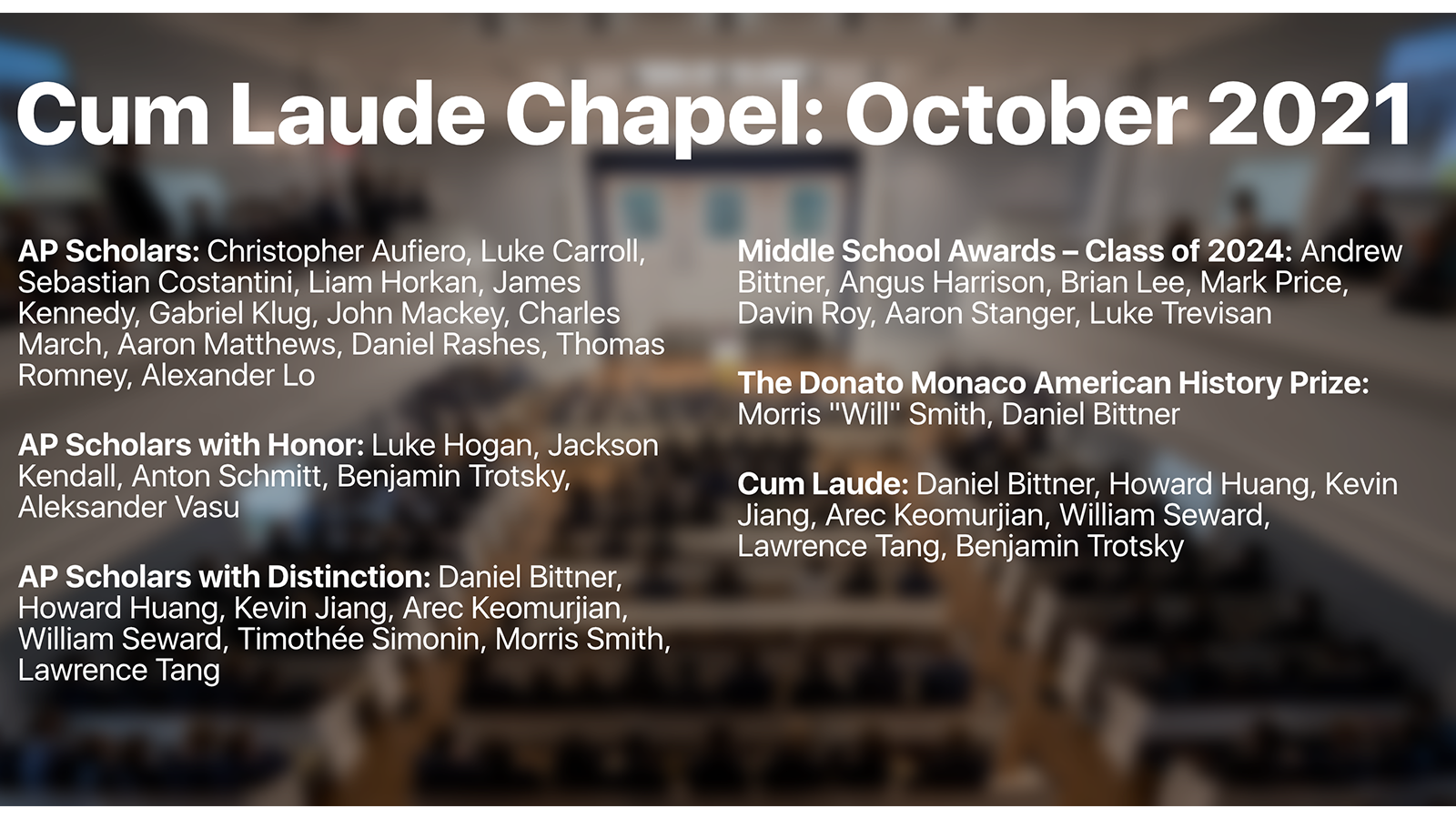 On October 8th, the Belmont Hill community was honored to hear from Dr. Lee M. Levison as the featured speaker of the Cum Laude Chapel. Dr. Levison has led an illustrious career in academics at institutions across New England and came to Belmont Hill with over three decades of experience working with students. After graduating from Amherst College with a Bachelor’s in History, he attended Harvard University’s Graduate School of Education. He worked for 5 years as a Dean at Noble & Greenough school, where he taught and coached a young Mr. Schneider. As Mr. Schneider put it, he became “the single most important mentor in my life.” He then moved on to the role of Head of School at Kingswood Oxford School in West Hartford, CT, a co-ed college preparatory school not too different from schools in the ISL. Our own Mr. Tim Sullivan attended Kingswood during Dr. Levison’s time there. Dr. Levison opted for a change in scenery in 2006 when he moved to the Collegiate School, a K-12 boys school in New York City, where he worked until 2020.

With a long and storied career in education, Dr. Levison appeared to be the perfect candidate to speak at a chapel dedicated to academic success. He began with an anecdote from Mr. Sullivan’s final college football game. He detailed the way that Mr. Sullivan carried himself despite taking a loss in his final game. He explained how his work ethic and composure had become motivation for younger students at Kingswood, claiming that his “tenacious dedication changed the culture of the football program at Kingswood.” While Cum Laude is an academic prize, the quality of character that Mr. Sullivan exhibits epitomizes the values that the award hopes to recognize. Dr. Levison took care to mention that the award is not based solely on GPA, but also factors character and influence on the community into account.

On a similar vein, he marveled at how multifaceted Mr. Schnieder’s talents were during his time at Nobles. Mr. Schneider was able to play an instrument, excel academically, play three sports, and sing in an acapella group simultaneously. Despite everything on his plate, he always showed kindness and humility to those around him. Dr. Levison noted how valuable it is to have a role model like Mr. Schneider on campus to represent what every student should strive for.

After these stories, he focused on sources of his own inspiration, and how what he has learned from his role models has guided his career. He used the metaphor of craftsmanship to explain why motivation overshadows talent in the long run, but how there is also more to success than hard work. He mentioned how Ted Williams’s .406 batting average during the 1941 season is an example of what dedication can do. Dr. Levison’s messages resonated due to their relatability and relevance due to the academic chapel, and his words will not soon be forgotten.