Debate of the Issue: Skiing vs. Snowboarding

Debate of the Issue: Skiing vs. Snowboarding 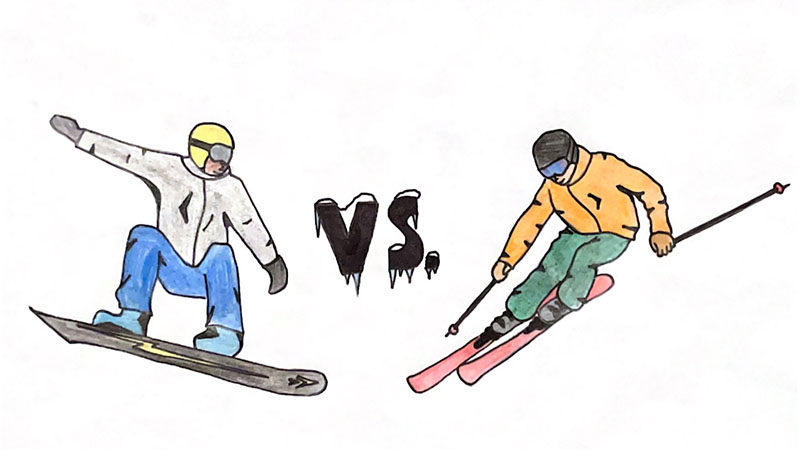 Skiing has been one of the most popular sports and forms of transportation since 6000 B.C in northern Russia, the earliest evidence we have of skiing. Originally, skiing was performed in its truest and best form, Nordic skiing. It was originally a mode of survival in extreme environments and contributed to the survival of the human race. An advantage of skiing is its versatility, something snowboarding does not have. There are two types of skiing, Alpine and Nordic. Alpine is more of a commercial sport and has been an Olympic sport for the past few years, while Nordic is less known but is more practical and requires more cardio strength.

While some may criticize the many components of skis; two skis and two poles, it is in fact a strength. If a snowboard breaks, is faulty, or uncomfortable, then it’s over, you simply cannot go on the mountain that day, and could potentially get stuck in a dangerous situation; however with skis, that problem is non-existent.

Finally, the real advantage to skiing is speed. Having poles and being able to move your feet allows for much higher speeds; at the end of the day it matters less how you got to the bottom of the mountain, all that will be remembered is who got there first.

To conclude, the greatest counter-argument a snowboarder could make is that when falling with skis is a lot more dangerous than with snowboards, however,the solution to this argument is quite simple: don’t fall.

Since its first prototype invention in 1965, the snowboard has grown in popularity extensively. It has become one of the biggest winter sports in the country, and is another alternative to skiing. Although it hasn’t reached the same level of sales as skiing, 0.7 million vs. 3.2 million (in reality that’s only 1.6 million since you need two skis), nevertheless, it is still just as known. The art of snowboarding requires the rider to lean on their toes and heels in order to turn or stop the board. Thus, snowboarding requires a considerable  sense of balance that isn’t needed when skiing.

One major advantage of snowboarding are the boots and attachment system. The boots themselves are very light and flexible compared to the clunky ski boots. As a skier myself, I know the struggles of going anywhere with ski boots. Due to the locking system of the ski, the boot is rigid and square, ultimately resulting  in a tiring rocking motion when walking. I won’t even mention the stairs. On the other hand, snowboard boots are just like any pair of outdoor snow boots, with a special tightening mechanism to keep them locked in. In these, you can run, jump, and do anything your heart desires.

While Lev may have some creative arguments, I think they will be fairly easy to disprove. He’ll probably argue that traversing is tough with a snowboard but that’s why it’s so easy to take off and the boots are so comfortable. Also, getting off the chairlift may be hard, but once you learn how to turn the board, it’s no big deal. And if it’s so bad, then why has it become the biggest new sport in the last 30 years?