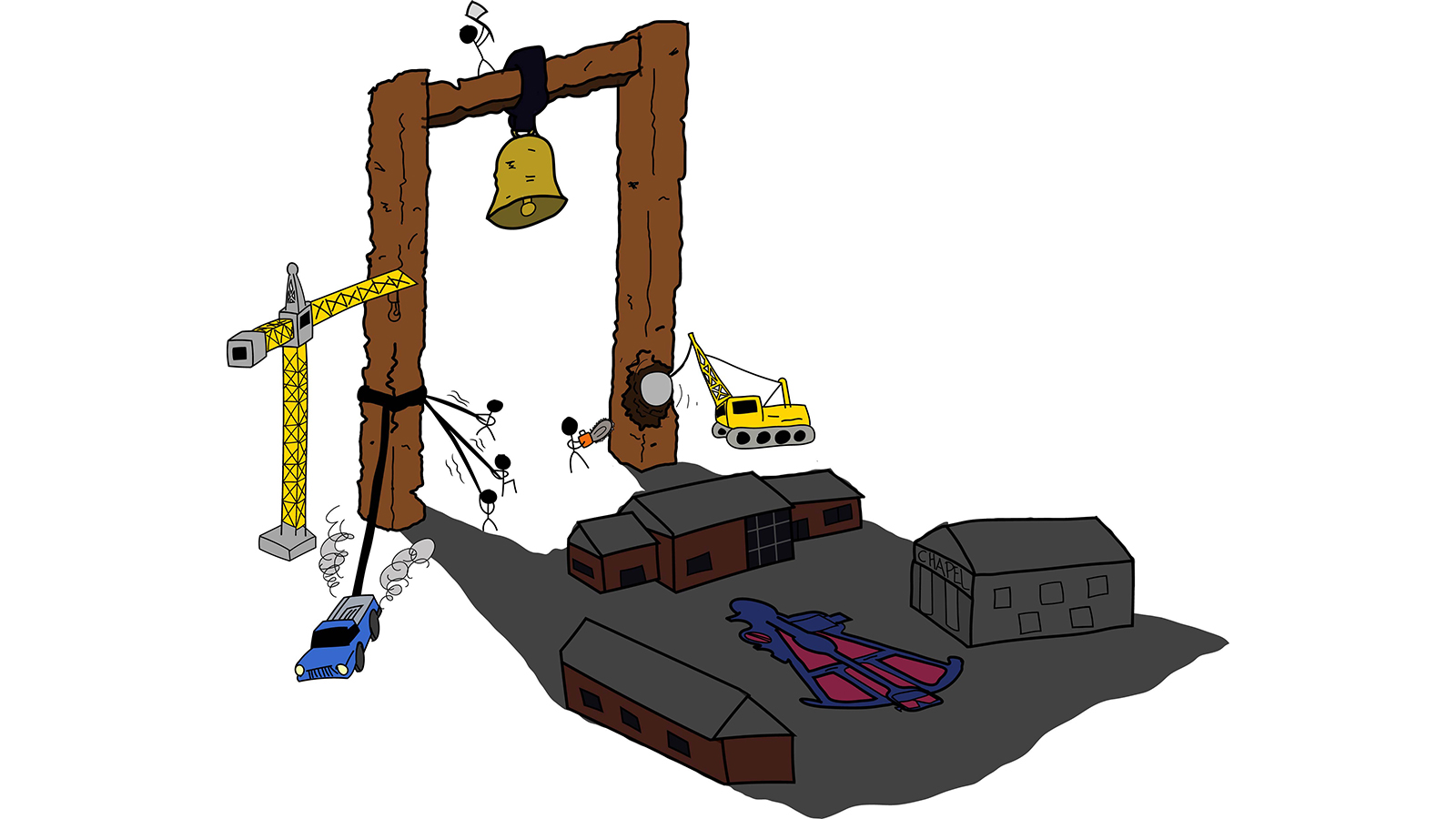 Towards the end of a summer filled with tremendous amounts of global conversation surrounding both racial injustice and the COVID-19 pandemic, an email outlining one of Belmont Hill’s initiatives may have flown under the radar of many students. This particular email, sent from the Chair of Belmont Hill’s Board of Trustees, Jon Bioti ’87, outlined that the school had made plans to remove one of two historic bells from our campus. In writing, Mr. Bioti said, “We have to take the bell down—the lessons from our history are eclipsed by the need to make our environment more comfortable and inclusive for all of our students.” While most students are more familiar with the bell beside the lawn-facing side of the Chapel, among other things the namesake of our Middle School Newspaper, the bell in question sat beside the Head of School’s office raised by two pillars of wood.

Those who are unfamiliar with the history of the bell are encouraged to learn more from this presentation made by members of the Class of 2017 to the Belmont Hill Board (linked here). In their research, students discovered that the bell has close ties to a small handful of school benefactors throughout the mid 1900s, and is believed to have originated as a slave bell from a Cuban sugar plantation. It is not abundantly clear whether the bell was a replica or the original one seen in photos from 1895 of the plantation, but whatever the case, its history is deeply entwined with that of Belmont Hill.

A school conversation about the history of this bell began after Diversity Day in mid-May of 2017. Students in Mr. Hegarty’s Advanced History Research class presented their findings of the bell’s history to the entire school in Chapel, and again to the Belmont Hill Board, recommending a wide array of actions that could be taken including commemorative plaques, school remembrance Chapels, ceremonial ringing, and online documentation among other things. At the time, Mr. Schneider was transitioning into his new role as Head of School, and he says the history of the bell was presented to him by then-Headmaster Dr. Melvoin “as it was, unresolved.” Furthermore, no formal recommendation had been made surrounding the removal of the bell, as conversation was more focused on how to incorporate its history more effectively into the daily lives of all Belmont Hill students.

While the school was experiencing a period of intense change, the centennial anniversary of its inception was fast approaching. The students who presented on the history of Belmont Hill and specifically this bell asked the community at large “Who are we as a school? And what do we stand for?” These questions, and so many more, were not fully answered until this past summer as Belmont Hill conducted listening sessions with young alums of color, students, faculty, and a host of other community members. Through these discussions, it became clear that, in the words of Mr. Schneider “there was a new level of both clarity and strength around concerns about the bell staying up,” and decisive action was necessary. After the decision worked its way through the committees of Belmont Hill’s Board, it came to a vote before the full group in late July. The board voted unanimously to remove the bell from campus.

Mr. Schneider also notes that “what’s important as part of that is that it was not an ‘either or’ conversation, it was an ‘and also’ conversation. There was a sense that it was time for the bell to come down and we also need to make sure we preserve, honor, understand our history and not create any perception that this was about trying to act like our history wasn’t there.” This sentiment is key, especially as our nation grapples with similar concerns about names, family stories, and connections. Some community members did not support the removal of the bell, however Mr. Schneider is clear that “having that bell on campus was hindering our ability to deliver [our school’s] mission to a group of students at our campus today,” and that was the main reason its removal was so vital.

In addition to the removal of the bell, the Board’s standing Diversity Committee has established a history task force, led by Gretchen Cook-Anderson and Emmett Lyne ’77. This group, including both Ms. Zener and Mr. Zellner, is charged with evaluating the history of Belmont Hill, campus signage, building names, and awards, as well as creating a plan for the future of the bell. While it remains physically on campus in storage, the school is in the beginning stages of communication with local museums about possible placement in the future. Mr. Schneider says that “we see it as a beginning and not an ending. It’s easy to see that taking down the bell is a conclusion to that challenge… I think it’s quite the opposite.” As the Belmont Hill community continues to discuss issues surrounding Diversity, Equity, and Inclusion this year and into the future, it is crucial that we remember that every student experiences life at school differently and it is our job as an institution to welcome every perspective, opinion, and background onto our campus with open arms.