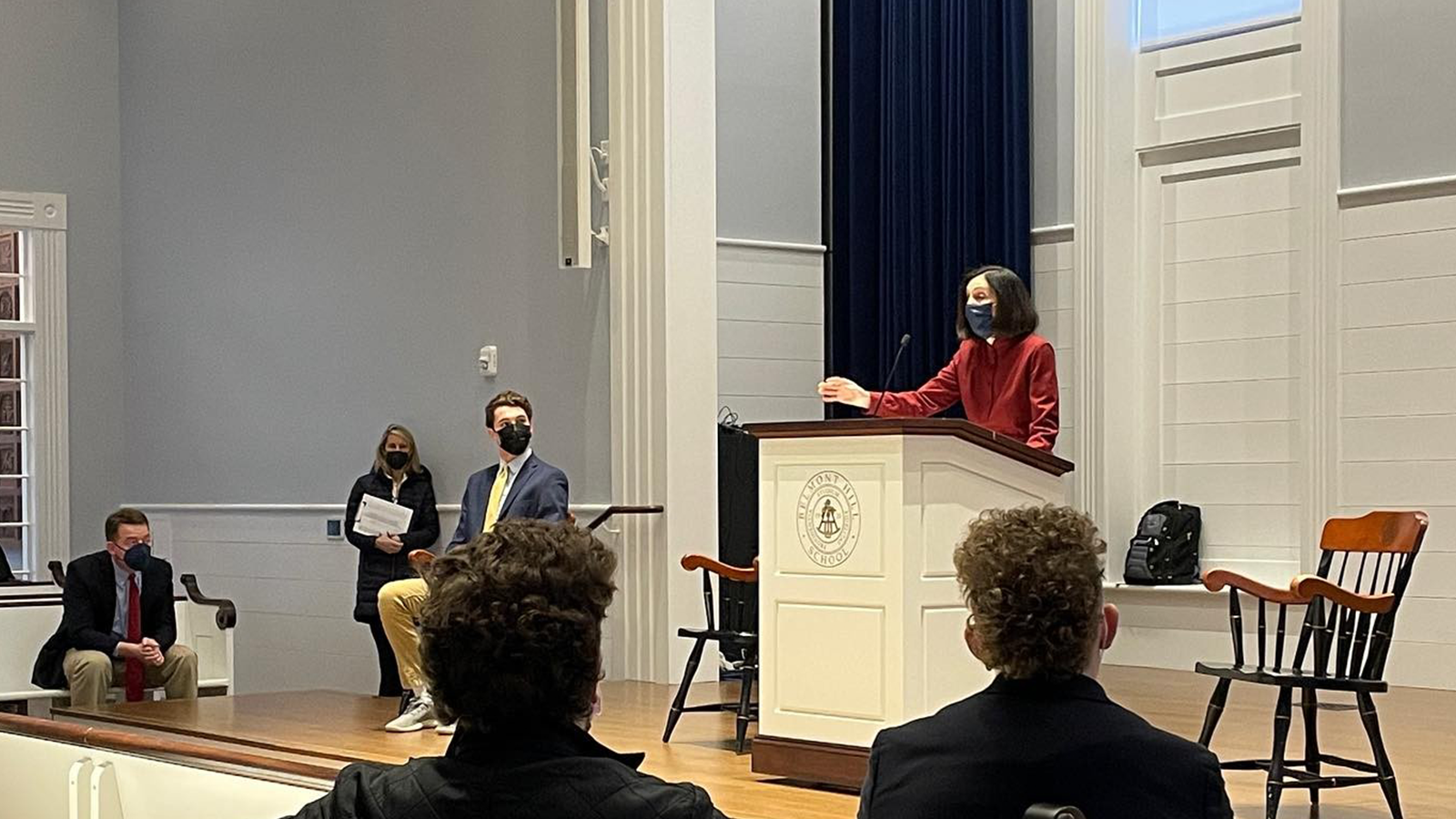 Belmont Hill welcomed Newton’s Mayor Ruthanne Fuller to the Chapel podium on January 14. Introduced by School President Luke Carroll ’22, Mayor Fuller is the mother of three Belmont Hill graduates, and her husband is from the Class of 1975. She served many years on the Board of Trustees and chaired the Committee on Trustees.

Ruthanne Fuller is the first woman mayor in Newton’s history. She graduated from Brown University and Harvard Business School. Prior to her historic election in 2018, Mayor Fuller worked as a strategic planner for non-profit organizations and businesses for over two decades. She also served as Alderman-at-Large from Ward 7. As mayor, Fuller invested $150 million in Newton’s infrastructure, instituted full-day kindergarten, and developed the town’s first climate action plan. As Luke Carroll stated in his introduction, “She is an example of public service done right to us all.”

Mayor Fuller first spoke about leadership. She described Belmont Hill as an institution that consciously teaches character, where the faculty challenges and pushes the students. In this environment of fostering leadership, Fuller mentioned that “BHS constantly creates a learning environment where leadership is on display and where the curriculum and pedagogy, your teacher-coach model, and your faculty, encourage each of you to develop and hone your leadership skills.” Fuller spoke from experience, witnessing the palpable impact that Belmont Hill had on her children and husband: “I see Belmont Hill and these leadership skills and each in every one of them. It has served each of them really well.”

She then transitioned to discussing her role as the mayor of Newton, describing it as being all about leadership and serving others. Part of Fuller’s job as mayor is to react to the world around us. She must confront the challenges of social injustices, climate change, the ongoing pandemic, and many more. As she explained, “They are not academic questions, nor are they easy ones.” Mayor Fuller is tasked with the most difficult of these issues, as “when something lands on [her] desk, it means it’s the hard ones… the hard ones that have conflicting values inherent in them.”

Mayor Fuller’s responsibilities have become more demanding in recent years: “All of this has gotten harder. We are in a political climate where trust has eroded. I see viscerally a rise in cynicism and contempt.” In navigating these difficult times, she called on the students “to be strong on our values but soft on each other.” Though faced with great adversity, Mayor Fuller has embraced these challenges to lead Newton to the best of her ability, stating that it takes sacrifices to make meaningful change.

As a message for the students, Fuller said, “It’s easier to sit on the sidelines and complain. Easier yet to read a newspaper, look at the headlines, and just throw up your hands. It’s obvious that we can do better. It’s hard to be in the ring. It’s challenging to serve. It’s difficult to be a leader.” Mayor Fuller then went on to underscore the privilege of attending Belmont Hill. She encouraged students to utilize the opportunities Belmont Hill provides to “get in the ring” and to take the lead.

Belmont Hill was graced by the leadership and wisdom of Mayor Fuller, who has led Newton through the pandemic and tackled several demanding issues. She exemplifies the leadership and service that Belmont Hill strives to foster in its students, and her speech eloquently narrated her responsibilities as mayor. In closing, Mayor Fuller said, “My advice: start now. Don’t wait. It can be really small—[it] doesn’t really matter. Just start. And be kind while you’re doing it.”