Playlist of the Issue: November 2018

Playlist of the Issue: November 2018 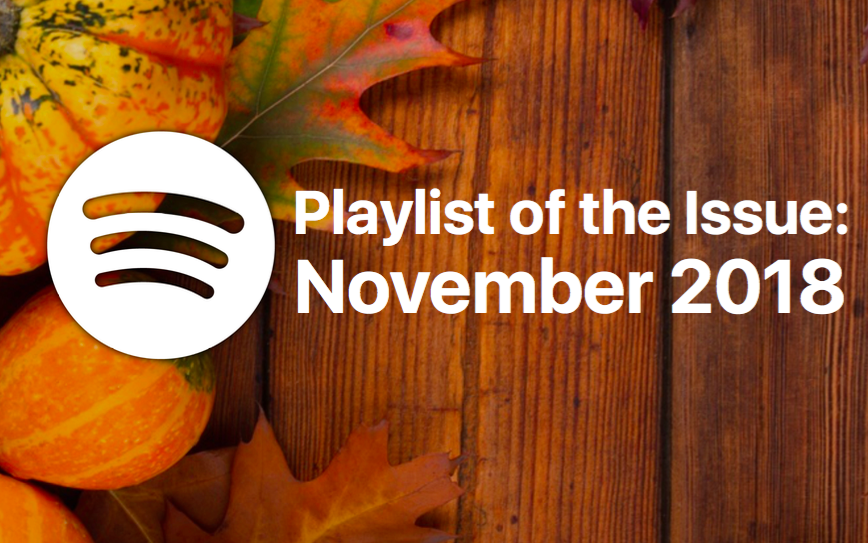 After the viral popularity of their first song, “Magic In The Hamptons,” many may have expected that the recently-formed duo Social House were destined to be one-hit wonders. The release of “Higher” shattered those expectations and showed the world that Social House isn’t going anywhere anytime soon. Though the success of the new hit is still dwarfed by its predecessor, it has the makings of an equally upbeat party anthem.  “Higher” also expands Social House’s repertoire with a grunge feel that contrasts with “Magic In The Hamptons”s playful vibes, a change which may attract new fans to the up and coming artists’ base.

You’re A Mean One, Mr. Grinch – Tyler, The Creator

Say hello to the new and improved “You’re A Mean One, Mr. Grinch.” I know it’s probably only been a couple days since you put those fake spiders in the attic and brought your rotting pumpkin to the dump, but I can’t contain my excitement for Tyler, the Creator’s take on the Christmas classic. Tyler produced the song for the 2018 remake of Dr. Seuss’ The Grinch, set to release on November 9. Mixing hip-hop with classic lyrics, the rapper hits the mark and delivers much-needed variety to the cheery overdose of holiday music that’ll surely dominate the radio waves once Thanksgiving rolls around.

“Written In The Stars” will pull at your heartstrings. A collab between John Legend and K-pop star WENDY, the love ballad blends their extraordinary vocals in perfect harmony. Focusing primarily on destined love and love at first sight, it includes such touching lyrics as “I know there is no limit where we’ll go” and “First time we met, but I remembered you.” The romantic mood which the song sets is further strengthened by the soothing guitar accompaniment in the background.

We Built This City – Starship

“We Built This City” topped music magazine Blender’s “50 Most Awesomely Bad Songs Ever” list in 2004 and Rolling Stone readers voted it the worst song of the ‘80s by a landslide. But the haters won’t stop me from loving its buoyant beats and nonsensical lyrics (my personal favorite is “hoopla”). Genius’ Behind the Lyrics on Spotify states, “It takes real bravery to admit liking ‘We Built This City.’” I’ll take that as a compliment, because I’m proud to say that every time the chorus roars on my car radio, I’m screaming “broken bones” right along with it.

It’s finally here. After five years since his last album release, a period which was marked by personal and professional turmoil, Lil Wayne is back to remind why he is one of the greats. In “Famous,” he celebrates his success over the past two decades with the help of his daughter Reginae Carter. The song evokes mixed emotions for listeners, both a joy to hear another verse from Wayne and a yearning for the rapper’s prime, which has long since passed. Weezy sums it up best: “You probably thought my career be short and sweet….Superstars don’t sparkle. We shine deep.”

About two weeks ago Khalid dropped Suncity Vertigo, an EP that was anticipated to be on the same level as American Teen. Although the song choices on his album were suspect and a few of the better songs were previously released as singles, Khalid continues his R&B/Soul dominance with “Saturday Nights.” His angel-like voice echoes throughout this song as Khalid, once again, drops an emotional track that leaves us all weeping.

REEL IT IN – Aminé

To be honest, I’m not the biggest fan of Aminé. While he has some very good songs, his other tracks are pretty bland and don’t offer that emotional appeal some listeners look for. However, this song currently is on my hot list as the beat simply slaps. Aminé is a gifted rapper who has the ability to release unequivocally good beats and sometimes offer an emotional piece to his songs. Although “REEL IT IN” doesn’t offer as much emotion, the song is still heat.

6LACK recently released his latest album, East Atlanta Love Letter, in Fall 2018, and the album does not disappoint whatsoever. I currently have this album on repeat; 6LACK is on the rise and one of the more underrated artists today. With Offset’s feature which offers a different beat, “Balenciaga Challenge” combines 6LACK’s R&B talent with Offset’s rap beats and creates one of the hottest R&B songs of 2018.

Talk about a throwback. Released in 1977, “Only the Good Die Young” is one of the handful of classics that legend Billy Joel has created during his storied career. Joel’s talent on the piano combined with his soothing New York voice will go down as one of the more iconic combinations in musical history. “Only the Good Die Young” can be used in any situation; it’s an uplifting song, a sad song, or a song to listen to while doing homework. Billy Joel has a soft spot in my heart, and this song is definitely in my top 5 all-time.

I am a huge fan of Juice WRLD’s work, but I don’t love Future’s albums. However, Future & Juice WRLD’s World on Drugs is one of my favorite albums of 2018. I try to stray away from this style of music, but “Astronauts” is a very good song where Future’s talent surprises me. Juice WRLD is solid as always, and this combination could appear again down the road. Juice WRLD is taking the musical world by storm and is quietly becoming one of my favorite artists.