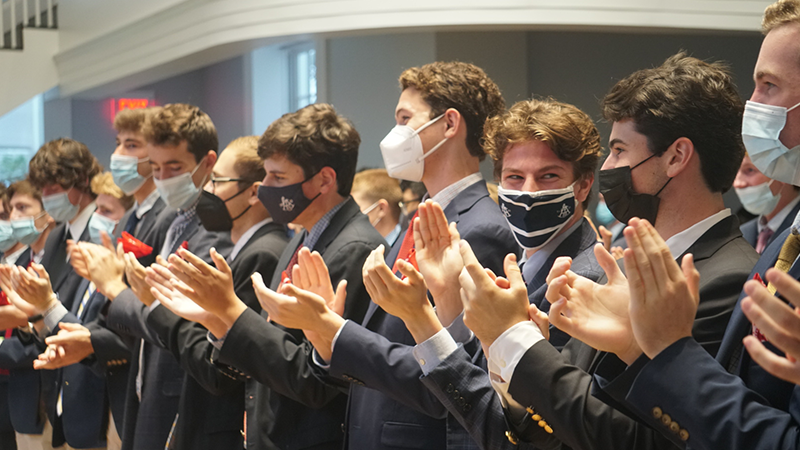 Tom Rinaldi’s The Red Bandanna explores the life of Welles Crowther and tells a tale of heroism. During a time of pure violence, fear, and unrest on 9/11, it was the average man, ill-prepared for such a catastrophe, who acted selflessly, putting himself in harm’s way and sacrificed his own life for others. Throughout the book, Rinaldi builds on the central theme of how to make a hero.

As Welles grows up as a child and begins to play sports, he “epitomized the try-hard guy, the striver, the kid wringing out whatever ability he has through practice and will.” Welles proves to be a hard worker and a dedicated team player. He knows that “a good whole allows everyone, the good and the not as good, to get better.” This selfless characteristic instilled into Welles at a young age stays with him his whole life and ultimately contributes to his actions during 9/11.

Welles also trains for and becomes a junior firefighter at Empire Hook and Ladder. He works his first fire alongside his dad and feels a sense of joy and pride as he helps put out the fire; Jeff asks Welles how he feels afterward: “the smile through the grime was answer enough.” As a teenager, Welles has this selfless attribute of wanting to help others. This characteristic shines again when a fire alarm goes off in high school. As Lee Burns, Welles’s friend, recounts, “He’s gone. We’re having a good time, and that alarm goes off. He went to Superman mode and just went to the call.”

Welles’s willingness to help others shines again when he stops Lee from getting into a fistfight in high school. Welles calms down Lee: “Think of everything you have to lose. This guy has nothing to lose.” Lee later finds out the bully who he was about to fight does time for assault and dies at 33 from a fight. Lee believes in the end, Welles saved him from a life-changing moment: “If he had not said something to me […] I would not be sitting [here] today. I would not be the parent of my daughter. I would not be a lot of things.” Welles is able to think clearly in a time of turmoil and help his friend.

Having been instilled with these attributes starting as a child, Welles is perfectly positioned to make that key choice and save others on 9/11. Welles has learned teamwork from engaging in sports, and the volunteer fire department showed him the importance of making a difference. As a fireman, Welles learned to take risks, move toward a problem instead of away from it, and rescue others in emergency situations. Thus, when Welles is thrown into the midst of chaos during 9/11, he is able to make the active choice to become a hero.

Welles’s heroism is symbolized in his red bandanna, which he receives from his father at a young age. Throughout his life, the bandanna becomes a part of him, traveling with him as he starts to become a hero. In the end, he wears his red bandanna as he rescues countless others during 9/11. All the people Welles saved distinctly remember his red bandanna and the courage he possessed in his final moments. The red bandanna symbolizes his self-sacrifice and his selflessness both as a child all the way until his death.

I believe Rinaldi’s book does an excellent job of infusing Rinaldi’s life story with the theme of building a hero. While Rinaldi is telling the tale of Welles, I myself feel empowered and uplifted by his story in a way that makes me want to help others. I definitely recommend The Red Bandanna to others, as not only does the book contain a great, engaging story, but also it inspires me to be the best person I can possibly be.