The End of an Era Brings Gratitude

The End of an Era Brings Gratitude 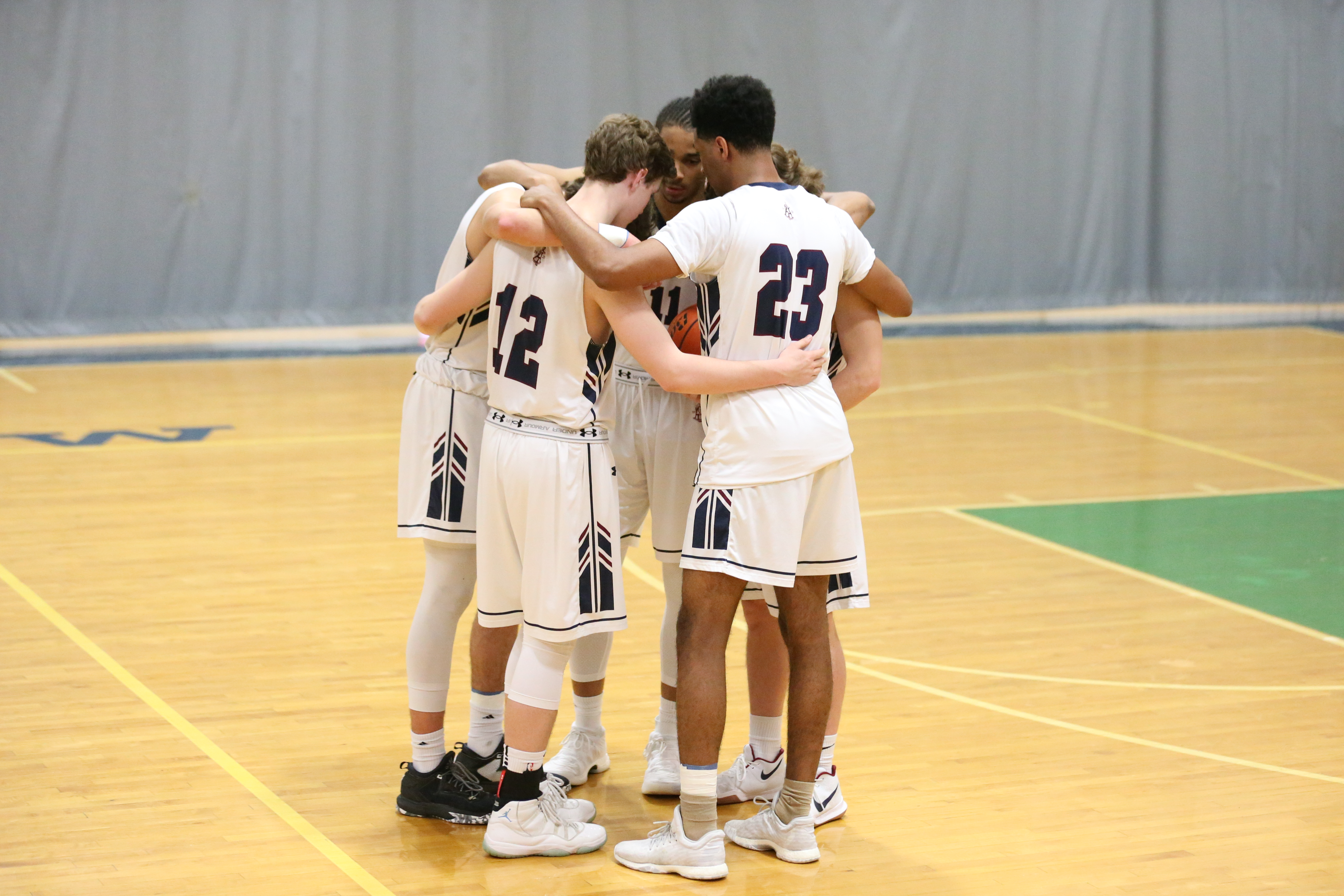 Stone-faced seniors trudged silently past Curry College athletic offices and into a purple-tinged locker room. Suddenly exhausted, beset by baggy eyes and aching legs, Belmont Hill’s fourteen Varsity Basketball players collapsed into their individual cubbies, unable to enjoy the spacious shoulder room their adopted locker room supplied. Instead, players and managers stared aimlessly at the linoleum flooring below, unraveling athletic tape and only beginning to process that this, indeed, was the end. For captains and 1,000 point-scorers David Mitchell ’18 and Jovan Jones ’18, 94-game careers had concluded; for freshmen Luke Bobo ’21 and Casey Rockett ’21, future minutes and potential for growth remained, yet pain did not discriminate. Grief consumed all.

An unfulfilled hunger burned in their hearts, and subjunctive questions silently swirled while the game’s details replayed. Foul trouble had victimized David Mitchell ’18, benching him in the first half and eventually permanently removing him from the high school floor with a few minutes in the game. Jovan Jones ’18, though nearly perfect from the line and on defense, had struggled to convert second-half field goal attempts, and the team’s one-for-17 three-point percentage frustrated the rest of the group.

A thin wall separated Milton Academy’s locker room—Curry College’s other visitors’ space—from Belmont Hill’s. Voices, cheers, shouts, and music blared clearly from the other side, but the final buzzer, sounded and permanent, had stripped Belmont Hill of its agency. As Coaches Murphy, Martellini, and Cofield made their way from the gym to the locker room, silent acceptance became the team’s only option. Hyping themselves for the championship round of NEPSAC play, Milton players screamed along to “God’s Plan,” a reminder of how fleeting good things can be. Multi-year careers had suddenly evaporated, and yet only three days ago, at a different locker room, the Belmont Hill team had mobbed each other after a quarterfinal win over Williston Northampton, dancing and jumping to Drake’s other current hit, “Look Alive.”

Maybe most of all, those hushed by the weight of the moment gained appreciation for an intangible that has defined the previous four years of Belmont Hill basketball. Among students, faculty, and even alumni, this group has reshaped an institutional culture. Basketball has become The Loop’s favorite sport to support, “Pack the Fritz” its popular rallying cry, and Dr. Melvoin has traveled both down to the Jordan and to away gyms to watch almost every one of the team’s competitions. Once a rather neglected sport at Belmont Hill, basketball has become one of the school’s premier offerings.

While the NEPSAC Class A semifinal loss to Milton Academy was disappointing, many will remember last week’s quarterfinal win over Williston as the highlight of their Belmont Hill basketball careers. “The highlight of my career,” Luke Jordan ’18 explained, “has been getting a Class A tourney win and beating a team seeded much higher than we were. Everybody doubted us all year and we kept proving them wrong.” Expecting a home game in the NEPSAC Class A tournament and instead slapped with the seven seed, Belmont Hill traveled nearly two hours to Easthampton, MA on a Wednesday afternoon. Supported by a loud twelve-member Loop who made the same journey and hijacked the gym from Williston’s less passionate student section, Belmont Hill played a tremendous team game, scoring 72 points on a 49.1% FG percentage and accumulating six steals, 21 deflections, and nine other forced turnovers. Mitchell ’18 shot over 50% and grabbed seven rebounds, Jake Bobo ’18 did not miss a shot, Jake Haase ’18 battled for six rebounds and five deflections, and Spenser Smith ’18 ignited a first-half run with his first career in-game dunk, providing a long overdue burst of defensive excitement to the team’s play. Despite frequent substitutions and focused contributions from nearly every member of the team, Jovan Jones ’18 carried Belmont Hill to a victory, exploding for 39 points and answering every hint of a dangerous Williston run with a huge bucket of his own.

“I’ve always known I’ve been able to dunk in a game,” remarked Smith ’18, “and when it finally happened it was so cool to see everyone as excited as I was when I turned around to look at the team and the people in the crowd…beating Williston was amazing. It was a true team win and celebrating after with the kids who the made the trek out to see us play was indescribable.”

Bobo ’18 agreed with Spenser, adding that he had “never seen so much pure joy in a group as I did after that game. It was frustrating and honestly heartbreaking not to be able to pull out that semifinal for the school and everyone who came to support us, but the best part of this year was definitely the Williston game.”

Belmont Hill carried league momentum into the Williston win. Despite falling to Brooks—who have not lost a game since the 2015-2016 season—in mid-February and losing any hope of an ISL championship, a tightly contested Senior Night victory over Governor’s and a special milestone for David Mitchell propelled the team into the playoffs.

On a quiet Wednesday afternoon in the Fritz Gym, Mitchell, eight points away from 1,000 career Belmont Hill points at the beginning of the matchup with St. George’s, quickly accumulated four points before being substituted. Later in the first half, however, after picking off a pass on defense, Mitchell raced alone to the other hoop, soaring high and dunking the ball for his 1,00th point. David enjoyed the opportunity to embrace his parents before finishing the game and receiving an inscribed commemorative ball afterwards.

Quentin Harris ’18 recalls, “Senior Night this year felt special because there were so many of us, so not only being able to thank your own parents, but to experience it with so many classmates was special.”

Governor’s Academy, boasting wins over Rivers and Nobles, presented Belmont Hill with tough competition; Gov’s senior Daniel Frechette ’18 seemed to never miss, and ultimately securing a 58-55 win required energy from a packed Fritz crowd and spirited Loop, 25 points from Jovan Jones, 11 apiece from Kevin Michael O’Boy and David Mitchell, and an additional ten rebounds from Mitchell. A final league win over Gov’s guaranteed the team a second-place ISL standing, and the energized nature of a tight win brought the group into NEPSAC playoffs with a refreshed momentum.

“Senior Night was great,” Mitchell remembers. “It was definitely an emotional experience given that it finally dawned on me that four years was up, but the moment felt much better after we won the game.”

In many ways, the conclusion of this year’s season represents the end of an era, a stretch that has combined major contributions from the Classes of 2015 and 2018. The team’s combined record over the past four years stands at 69-25, and end-of-season recognition from the ISL and NEPSAC acknowledge the achievements of this historic group. David Mitchell ’18 received his second career ISL Defensive Player Of the Year Award, while Mitchell, Bobo, and Jones were named to the All-League team. Jake Haase ’18 received an All-League Honorable Mention, and Jones and Mitchell were also named to the All-New England group. Even Coach Al Murphy earned recognition, receiving the Oswald Tower Award for high ethical standards from the Basketball Referees Association.

“Next year, we hope to keep the culture going,” insists O’Boy, one of the team’s four remaining players, along with Casey Rockett ’21, Luke Bobo ’21, and Mike Piazza ’19. “I’ll miss these guys off the court and on, and although it might be hard, we won’t change our attitude.” Although this era in Belmont Hill basketball has ended, with strong coaching and a youthful program, the culture remains.