Which Sports Season Has the Strongest Loop?

Which Sports Season Has the Strongest Loop? 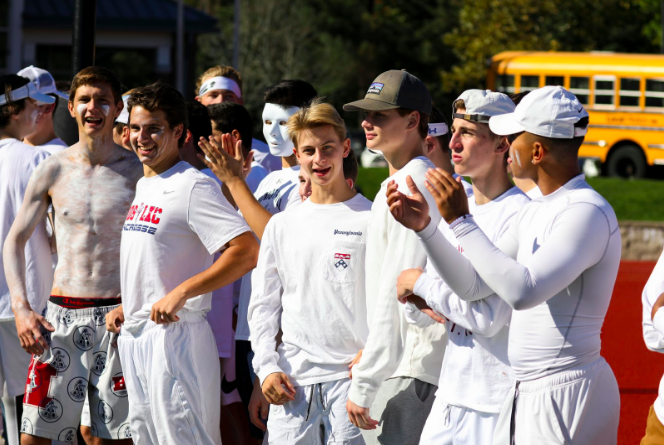 Everyone knows about the Loop. It’s been around for many years and has supported BH athletics through thick and thin. Whether it’s on the football fields, hockey rink, or even TD Garden, you can bet on the Loop being there and supporting their competing teammates. But throughout its time at BH, the question has always lingered. In which athletic season, Fall, Winter, or Spring, is the Loop at its strongest?

Many would say that because of football, the fall Loop is the best. Every Homecoming, the Jordan, and sidelines are packed with spectators, including students, alumni, and parents, all coming to see their favorite team play. While this is great and all, the end zones are where the real magic happens. And that is where, when things get rough, the Loop gets rowdy. Every touchdown is met by a massive cheer and celebration. Every opponent’s penalty, a “you can’t do that” chant, and with every big win, a massive wave of students rush the field in celebration. This display of school spirit would bring a tear to any red-blooded Belmont Hill alum’s eye, something that soccer and cross country just can’t replicate. Yes, those sports have their fair share of drama, but they just don’t evoke that football level of fan enthusiasm.

With so many sports to choose from, only two really make it onto the Winter Loop’s packed schedule:  Hockey and Basketball. It would be hard to say which sport receives more support since it varies from year to year. For example, this past winter, a powerful campaign, known to many as “Pack the Fritz”, rose up from the Varsity basketball squad. With this simple slogan, the Loop helped to literally pack the Fritz with more fans than the bleachers could handle. Couple the crowd with the scores of students rocking Hawaiian shirts as well — it was a sight that gave many BH opponents night terrors.  It was already game over before the Nobles’ team stepped foot into the gym. This winter, hockey had a harder time cultivating the same level of support. With a rough season and a refrigerated seating section for fans, it was no wonder that the Loop just couldn’t turn out for Hockey quite like it did for Basketball. However, there’s always next year! With Connor Hopkin’s imminent return from the semi-professional limelight and a young squad featuring new talent, the pendulum may switch back to hockey next year.

Finally, there is the spring season. There seems to be a spring break among BH fans, as many games go unattended by the Loop. With so many things going on in the academic world this time of the year, and the seniors virtually not present during senior spring as well, it is hard to raise the same kind spirit the other two seasons seem to do so well. One reason for this could be how many students are actually playing sports. There are more than twice as many sports in the Spring than in the Fall, and many more students are engaged on a Saturday, leaving little time to root on their classmates. While Lacrosse may have some big tilts against opponents, and the Baseball team plays at exciting venues like Fenway Park, students may show up for a game or two, but it’s hard to muster the same spirit. Maybe things could be different this season, with more support from our fans, but for the final verdict, I would say that the Loop is strongest in the Fall and football season, and gradually weakens as the year goes on. There is still time to change that though, as another month remains in the school year and many victories await!