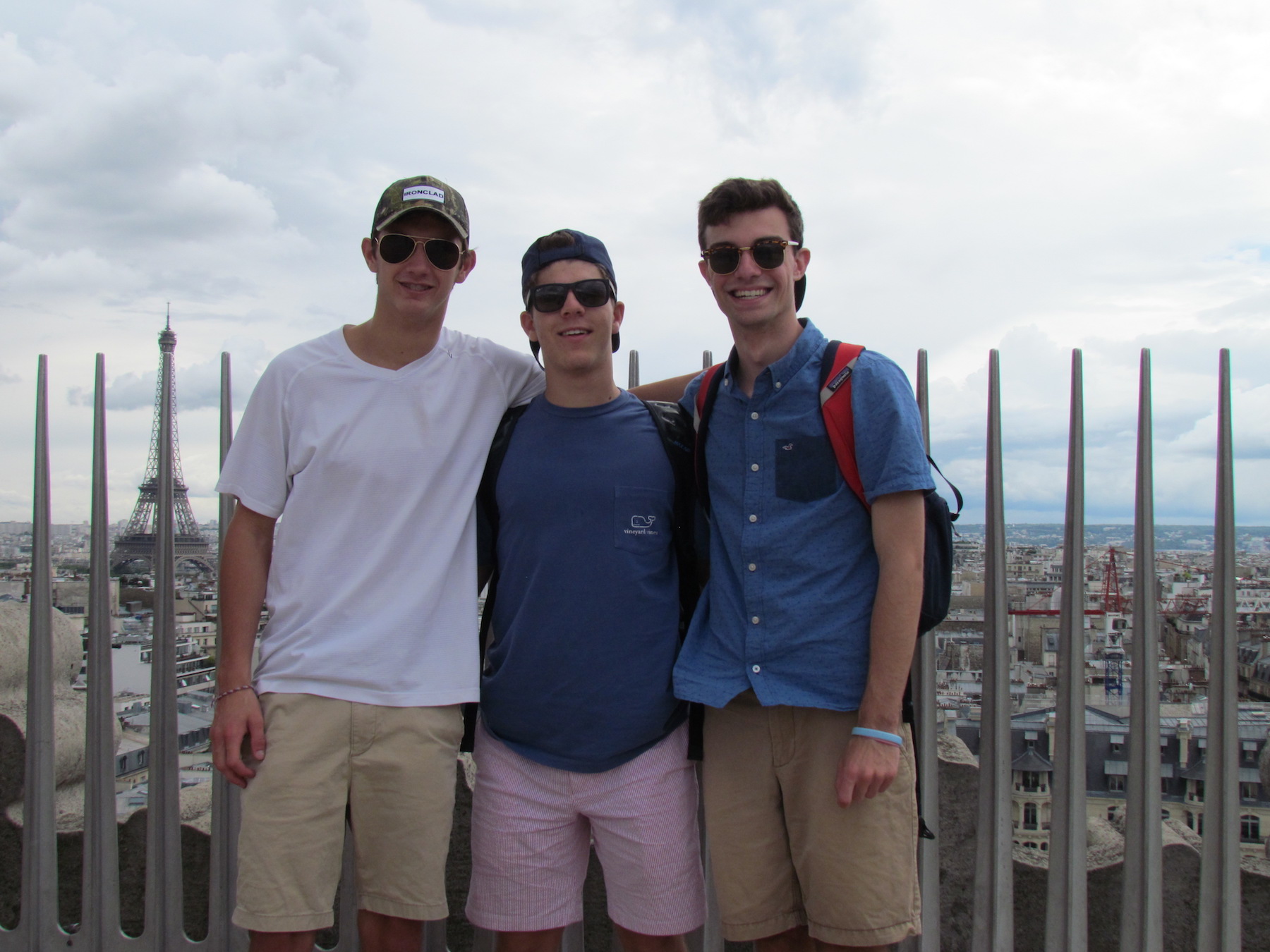 As we looked across Omaha Beach on a chilly summer morning not so different from D-Day some seventy-three years earlier, we could only think of one word: incredible.

This past summer, Mr. Armstrong, Mr. Smith, Colin Vallis ‘19, Danny Tsyvin ‘18, and Gavin Colbert ‘18, embarked on the inaugural Kenney Legacy World War II (WWII) Trip to visit the historical sites of the European theater of war. The Kenney family donated this trip in honor of their late son, Charlie Kenney ‘06. Charlie was a true Belmont Hill boy. Well-rounded and energetic, Charlie was not only a hard-working student but also an outstanding athlete. Guided by a strong moral compass that pointed to commitment and a strong sense of duty, Charlie joined the Marines after ROTC at Brown but passed away just weeks before his deployment. Charlie felt a passion for WWII history, being especially inspired by the young, courageous RAF pilots who defended London valiantly from prolonged aerial assault. After meeting with the Kenneys and planning out the trip, we were excited not only to represent the school abroad but also to honor the memory of Charlie.

Our experience was marked by this one word, incredible, with every historical site, every museum, and every day on the trip. We aimed to honor the memory of Charlie by learning not only more about WWII but also about the armed forces’ core values, as Charlie wrote, “of honor, courage, duty, sacrifice, and commitment.” Visiting breathtaking battlegrounds, cemeteries, and museums in England, Belgium, and France, we gained invaluable perspectives not only on WWII but also on humanity, life, and the significance of sacrifice and heroism. The following are some of our favorite pieces from our travel blog:

The Day started off for the boys at the Royal Air Force Museum. After a 45 minute Tube ride and a quick walk to the hangars we were immediately encompassed by planes that ranged from tiny, fragile, early 1900s “planes” to jets that can reach mach 1.6 (faster than the speed of sound). Each of the planes were military and showed the conditions in which the fighter pilots and soldiers who were being transported, experienced. The greatest part of my day was being able to sit in the cockpit of one of the jets and play with all of the levers which moved different parts of the wings and dictated the plane’s’ direction. Being behind the controls, I truly felt like I took a trip back in time and was in the shoes of a 20th-century fighter pilot.

From the 101st Airborne Museum we took a road to the woods south of the village of Foy. In these woods during December of 1940, the 101st Airborne held strong and prevented German attack. They endured eight days of freezing temperatures around -28 Celsius and intense German artillery. They dug foxholes to protect themselves from the fire, foxholes that still exist to this day. As we walked through sacred rows of tall trees, I was struck with a sense of awe. This was the first battlefield we visited and the tangible results of battle were there to be seen. It is truly incredible that these brave Americans defied the odds and held the German war machine at bay. I only hope that one day I can possess the courage and perseverance of these men.

As we parked in the center of Sainte-Mère-Église, the drizzling rain set the mood for a somber yet fascinating day. We met our tour guide, Allan Bryson, and were enthralled by his epic storytelling of the D-Day landings on June 6th, 1944. Throughout the day, Allan showered us with poignant anecdotes, funny stories, highly detailed descriptions, and incredible photographs all from D-Day. We learned about the thousands of menacing hedge rows that protected the Germans inland, about the heroism and horror of storming the beaches, and about the factors that led to paratroopers being dropped all over the Norman peninsula far from their intended drop zones. At Omaha beach–the bloodiest beach head–we spent an hour on this sacred sand learning about the complexities of the historic landing. Allan drew complex maps of the assault in the sand while describing details and stories in a way that a history textbook never could. Standing there on the beach where my fellow American brothers fought and died for freedom, I had never been more proud to be an American. The heroism these men displayed in the face of such tremendous challenge must never be forgotten. Later in the day, we visited Utah Beach where the preliminary bombing by the Navy and Air Force successfully disabled almost all German opposition before the landing craft arrived. Whereas soldiers at Omaha encountered heavy machine gun fire from undamaged gun batteries, the soldiers at Utah were able to storm up and off the beach within an hour of landing. Unfortunately, there are just too many amazing stories to share from this fascinating day in the blog, but we look forward to sharing more stories with the school community and with all of you readers when we return.

Before visiting Omaha Beach and Pointe-Du-Hoc, we made our way to the Normandy American Cemetery and Memorial. Although it was heartbreaking to see a visual representation of all those soldiers that died, it was also amazing to see the sheer enormity of patriotic commitment and sacrifice. The tombstones–either pristine white crosses or gorgeous Stars of David–were planted as far as the eye could see. The 170 acres which was needed for the burial of troops made the battle seem like a myth, too dramatic to be real. Realizing that thousands upon thousands of men gave their lives just in one region of France to ensure freedom for the world; this memorial was the most sobering experience of the trip for me.

On the other hand, we also visited the German cemetery. Juxtaposed with the American memorial, the German tombstones were dark black and many of the soldiers shared stones. Overall the Cemetery was much more solemn than the American Cemetery. Even though the young soldiers may have died fighting for the wrong cause, their courageousness and loyalty to country were admirable.

We were then led to Point Du Hoc, one of the major objectives during D day. The American Rangers were tasked with taking over the Gun battery and underground bunker. The only problem: the bunker and battery were on top of an about 175 foot cliff and the transport vessels only had 5 feet of rocky beach to land the Rangers. When the Rangers landed, the Germans shot down the cliff, threw grenades down, and cut the ropes and ladders. The Rangers eventually made it to the top with the help of naval destroyers, who left formation, firing small caliber rounds at the Germans on top of the cliff. When the Rangers reached the top, the Germans retreated to their underground bunker. The Rangers dropped a Bouncing Betty (explosive filled with thousands of ball bearings) and napalm into the bunker. The Germans surrendered and came out of the bunker. However the Rangers did not complete their mission in time and their reinforcements abandoned them and landed on the nearby Omaha Beach. The Rangers fought valiantly against hundreds of Germans attempting to regain the facility until reinforcements came on the following day. Out of the 250 Rangers that started the mission, only 90 survived. Our tour guide brought the ruins to life and gave us vivid imagery to help us imagine the horror of the mission.

Following our hours at the Louvre, we continued our walking tour of Paris on wide streets like the Champs-Élysees. While walking around after dinner, the lights illuminated and displayed the beautiful City of Lights in all its glory as magnificent buildings that have stood for centuries left us in awe. As the lights lit the path to the Arc de Triomphe, we imagined American soldiers walking down the broad avenues being hailed as the liberators of such a majestic city. Allied soldiers fought across the beaches, across the fields, and in the cities so that such an incredibly historic city can exist in freedom today. We have followed their path across the continent and we are humbled by their sacrifice. Now, we can truly appreciate their commitment to a free, democratic world as Paris today shines as a bastion of liberty and beauty after four dark years of occupation.

Not only was the trip an opportunity to learn about WWII in London and Belgium and France, it has spurred me to consider the enormous impact on the people involved and the human cost of the war.  Thinking about the people of London during the constant bombings, or the men holed up at the Bulge, or the men storming ashore at Normandy leaves me wondering how those involved were able to meet and surpass their challenges.

We want to thank Mr. Armstrong and Mr. Smith as well as Danny, Colin, and Gavin for making the inaugural trip a success. Our hope is to help Belmont Hill students learn in greater depth about the history of WW II generally and the Normandy invasion in particular while gaining a greater appreciation for the men and women who serve in our military. It is our intention to make this Normandy trip a permanent part of the Belmont Hill experience.

To finish, we want to again thank the Kenney family for providing this experience for us. This trip was truly awesome, educational, eye-opening, and inspiring. Through this trip, we hoped to express our gratitude to the Kenneys, the thousands of fallen young men from WWII, and the veterans and current soldiers of our armed forces. Most importantly, we hope that the legacy and memory of Charlie will live on forever in our hearts and minds. We will forever remember and cherish the experience.