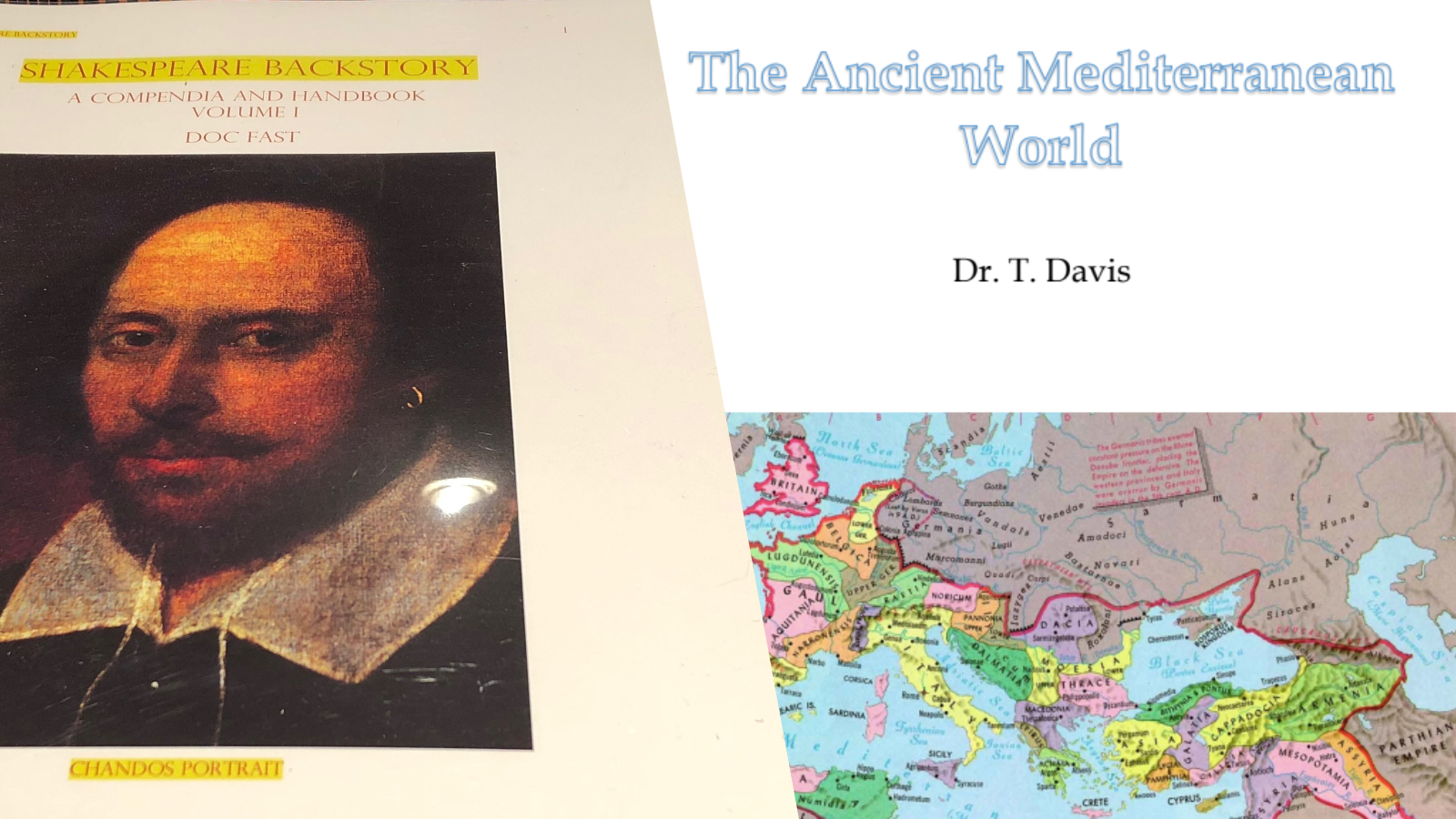 Here at Belmont Hill, we are extraordinarily blessed with passionate teachers and a rigorous curriculum.  In that spirit, our own Dr. Davis took the lead this summer in writing a new text for History 1, a class he has taught for a few years now.  A talented classicist and historian, he realized that the text that has been used for many years did not address some of the broader needs of the class and the history department.  Additionally, some criticisms were born out of the school’s NEASC, New England Association of Schools and Colleges, review three years ago. For these reasons, he began to supplement the class-text with some handouts and materials of his own last year.  Building from that, he zealously wrote a new text this summer, (around 100 pages thus far in length) which he is beta testing with his class this year. The text shores up many of the holes of the old book and encourages students to think more broadly about historical concepts.  “It’s very skill-based,” he explained, “and I highlighted a number of important themes such as military science, for example, in parts of the chapters I called ‘Spotlights’.” Additionally, he designed the curriculum in such a way that it can serve, “as an interdisciplinary nexus point between different departments: Latin obviously, art to some degree, and the English department which emphasizes mythology in the seventh grade.”  He is quick to point out, however, that this is not a solo project. “It is my hope that this will serve as a draft to which my colleagues who teach the class can add commentary and edit as they see fit. It is not finished yet; it’s what I’d call a well-polished draft, however, I fully expect this to be a joint effort that will become a more permanent text specific to Belmont Hill and the desired class. I also do not want it to become part of my own ‘cult-of-personality’ so to speak, therefore I want it to be a text from which anyone can teach, and perhaps I won’t even be involved with the class as a teacher looking further down the road.”  He also underscores that his goal is not to publish this work, but to continue to tailor it in conjunction with the department for Belmont Hill’s students. “In addition to promoting an appreciation for the origins of Western Civilization, my intent is to promote the study of history generally and to create a set of useful history skills that later teachers can use and build upon,” he said. Overall, we congratulate Dr. Davis and the entire history department on this endeavor, and appreciate the faculty at-large as they constantly strive for excellence on our behalf as students.

This past summer, Belmont Hill’s Doc Fast embarked on the ambitious project of creating a compendium of materials for teaching a number of Shakespeare’s plays.  This work, which marks the culmination of 47 years and counting teaching Shakespeare courses, spans over 700 pages and two volumes. This compendium reflects Doc’s impressive background in the subject; Shakespeare studies have been a journey of their own for him throughout his life.  A graduate of Oberlin College, Doc took only one formal course on Shakespeare during his undergraduate years, suggesting that the majority of his extensive knowledge on the subject has been self taught. Following college, he joined the Peace Corps, which took him to Aquinas University in Legazpi City, in the Philippines.  There, he taught a Shakespeare course to 55 young adults, one of whom, he recounts, was a Jesuit Priest. In the ensuing years, he completed a Masters’ Degree Program in Toronto, and, afterwards, a PhD in Stratford, England at the Shakespeare Institute. “I have always regarded the Shakespeare Institute as the ‘Mecca’ for Shakespeare studies,” Doc says.  While there, he studied alongside many of the more preeminent scholars of the subject in the entire world. His supervisor, Stanley Wells, edited The Oxford Shakespeare, a number of editions of Shakespeare compiled by the Oxford University Press.  Doc also struck a friendship with T.J.B. Spenser, the program’s director and the general editor of the New Penguin Shakespeare Series.  Throughout his work there, Doc frequently met with these esteemed scholars who guided him in his dissertation writing process. During my sit down with him, Doc opened the cover of an edition of Henry IV and pointed to a number of editors’ names contained within.  “One way or another, all these editors were connected to the Shakespeare Institute,” he said with his trademark excitement. Upon completion of his PhD, Doc traveled to California to begin his teaching career.

“Upon return from England, I landed in an independent school, The Webb School, in Claremont, CA, where I started teaching a full-year honors designation Shakespeare course to seniors.  Over 15 years there, I taught the course almost every year. I had the luxury of teaching what was an ‘honors level’ course and had some autonomy regarding content,” Doc remembers. “I used to take my classes every year to the Huntington Library in San Marino.  There, I met a man named Alan Jutzi, a curator of rare books. He’d show us around for a few hours and Jutzi would explain everything. They had a special binary to repair old texts. That library has the largest collection of Corto-editions of Shakespeare on the planet.  This guy Huntington had made money on real estate in the early [19]20s and sent his man in England to buy up private libraries from lords who were strapped for cash. They got a lot of really rare books from that,” Doc says.

After 15 years at the Webb School, Doc moved East to begin a new job as the English Department Chair at Belmont Hill.  Here, he started his Shakespeare course again, this time teaching a semester-long elective for seniors. Throughout his 31 years teaching here, Doc has reworked the course a number of times.  The material has evolved to meet the specific needs and interests of each class, as have some of the major points of focus. Doc explained, “Over the years things change. I kept building my repertoire of things to do and plays to address and ideas about how to teach the course.  That has changed a lot. In the last 10 or 15 years I’ve changed the way in which I’ve taught the course, specifically the order of address. I decided that I liked so many bits and pieces and didn’t want to give up any plays. My solution: I culled the ‘juicy bits’ out of many different plays and used those to start the course each new semester.  Regarding these bits, I used each as an example of a different device, tool, or element. With each one it’s like putting yet another tool in our toolbox, and after we finish three or four weeks looking at ‘bit pieces’, we enter our first full length examination of a play. By the time we get there, the guys have the resources. They know how to think, and how to approach the play.”  Over the years, Doc has continued his own education in Shakespeare as well, twice attending the University of Cambridge’s Summer Shakespeare School in 1996 and 1998, as well as studying at Exeter College, Oxford.

In the past, Doc has designed a number of courses, including the “Faulkner and the Southern Tradition” course for juniors, and “The Search for Faith” for seniors, and for each he has created compendiums.  Therefore, the decision to do the same for the Shakespeare course was a natural one. Ever since the introduction of computers at the school, Doc had been compiling documents and files for teaching and reading each specific play.  Every year, when teaching, he undoubtedly would come across something new and interesting he wanted to address in the following year, and he dutifully added them to a table in his computer. Over the years, the table expanded tremendously.  “This past summer I was on what’s called a summer sabbatical, during which you are expected to do something related to the courses you teach. I spoke to Dr. Melvoin last spring and proposed the idea of doing something with Shakespeare, but I had no idea what,” Doc explained.  “When I finally sat down to work on it this summer, I just started writing. I culled from my ever-expanding table and poked around through thousands and thousands of folders and files. Some days I worked for 10 hours straight, because I wanted to keep the information organized in my head and make sure I didn’t forget to address or add anything, or do something I had already done a previous day,” he said.  At this point, the compendium was 744 pages and was broken into two volumes.

Doc’s passion for reading, studying, and teaching Shakespeare have been apparent throughout the time I have spent with him.  His excitement for the material compelled Doc to labor for upwards of 10 hours each day for about a month, and throughout the process, Doc inserted some of his own areas of interest into the compendium.  “There is a great cohesiveness in a play like Macbeth that I find fascinating. In the beginning, the witches say, ‘fair is foul and foul is fair,’ and then later on Macbeth himself comes and says, ‘so foul and fair a day I have not seen.’  He did not hear the witches say that, they are his own thoughts, yet the language is cohesive with regard to the description which is by design on Shakespeare’s part. Allusions and reality are always blurred, too, in Shakespeare, which is fun to discuss.  Also, there are fun questions I always ask the guys. For example, I have often asked ‘is Lady MacBeth an alcoholic?’ I don’t think she is, but the language may suggests it, for example when she says to Macbeth, ‘Hie thee hither that I may pour my spirits in thine ear and chastise with the valor of my tongue.’  It always gets a fun reaction,” Doc explained. Upon completion of the current version of the compendium, Doc turned it into a PDF file and shared it with his colleagues in the English department.  So far he has gotten positive feedback from them as well as others. Doc’s friend Charles Mosley, who he met at the Cambridge Summer School and who twice came to Belmont Hill as a visiting lecturer for a week, suggested Doc attempt to get his amazing work published.  Ever the perfectionist, Doc explained that this is his ultimate goal, however he thinks it needs more revising before he reaches that stage. “Even this semester I keep thinking of things I want to add or amend as I’m teaching,” he said. “Somehow or other I’d like to get it published, and things with Shakespeare’s name on the cover tend to get published and do well, but I’m not sure when I’m going to be able to sit down and work for extended periods of time again.  Maybe next summer, but I’m not sure,” he said. Whatever he ends up doing, his compendium is a magnificent achievement, which will undoubtedly help students and teachers alike to better understand and enjoy the complex world of Shakespeare’s works. We thank Doc for his dedication, passion, and tireless work on behalf of his students and the subject he loves.