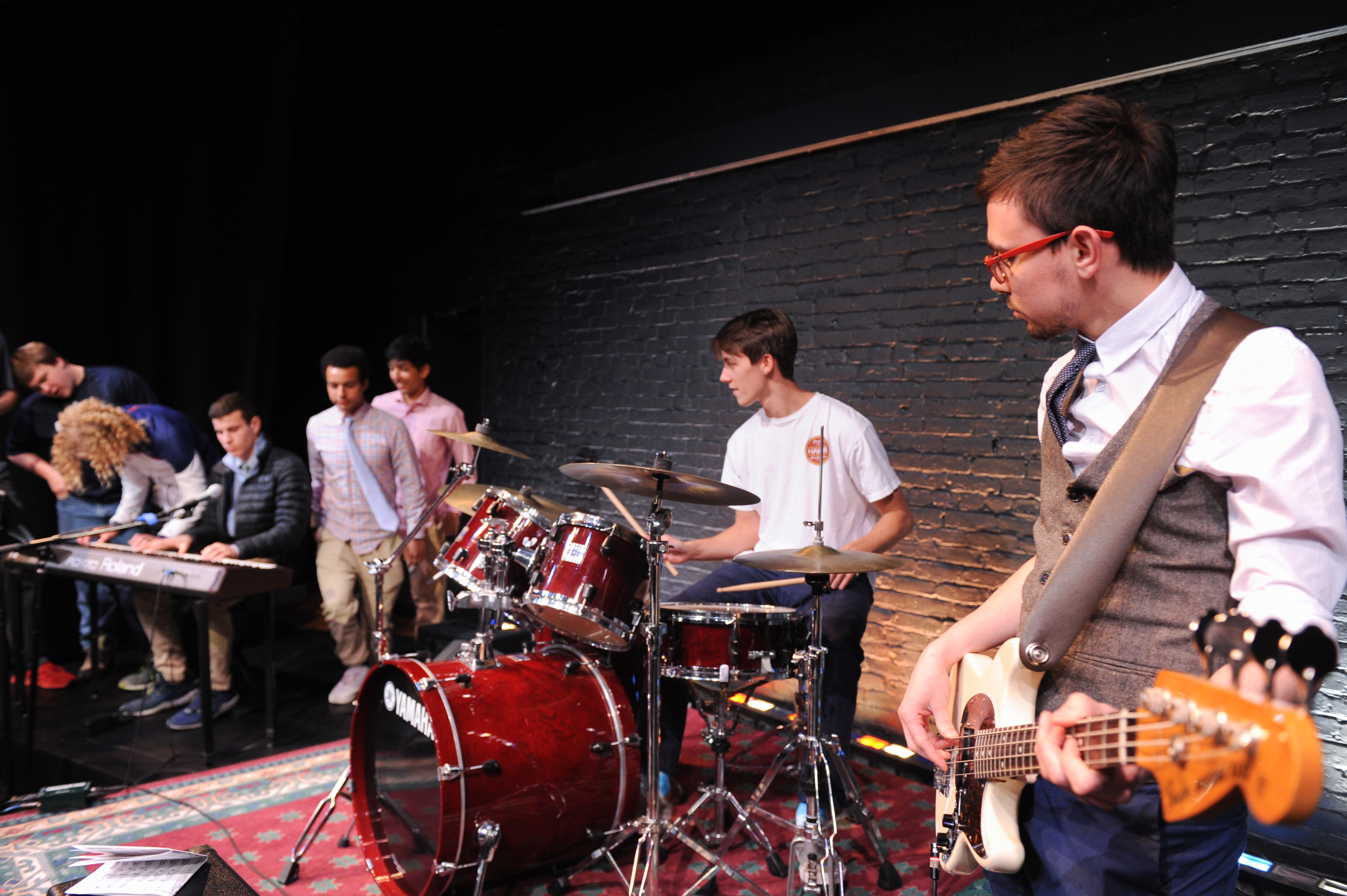 Filled with laughter, claps, and music, the 2017-2018 Coffee House was a night to remember. The two emcees, Gavin Colbert and Will Mischagna (aka Shaggy), opened with humorous remarks, setting a casual atmosphere in the Prenatt Theater. Following the comedians, Theo Why and Donovan Payne performed a beautiful duet of the song Perfect by Ed Sheeran, a soothing melodic start to the show, followed by Austin Kwoun on violin and David Paine on guitar playing yet another amazing piece. Moreover, Dr. Melvoin’s act captured the hearts of the audience. He first sang the Eagles’ Take It Easy with Mr. Sherman, David Paine, and Owen Grady, and later performed a duet of Simon and Garfunkel’s America with Mr. Sherman.  To everyone’s delight, Dr. Melvoin sang an unannounced encore — James Taylor’s cover of Oh, Susanna — captivating audience ears and hearts with his final Coffee House performance. Boy was it a good one! David Paine’s solo of Crawling followed by the Upper School Rock Band’s performance of the Black Crowes’ Hard to Handle livened up the audience and impressed all with the quality of music. The Jazz Combo’s version of Killer Joe was followed up by the Middle School Rock Band’s performance of the Beatles classic, reminding everyone that despite the many musical Seniors, there’s still plenty of upcoming talent in the music department. Henry Vettel and Jordan Sclar enchanted the crowd with a perfectly harmonized, beautiful rendition of Little Talks by Of Monsters and Men. The next song, U2’s Bloody Sunday, performed by Henry, Owen Pickette, Austin, and Theo, closed with an unexpected surprise when Owen dedicated the performance to his girlfriend and asked her to prom.  The theater echoed with “oo’s” and “ah’s” at this charming prom-posal. Last, and certainly not least, the traditional Senior Only closing act featured David Paine, Henry Vettel, Alex Ackerman, Theo, Austin, and Mr. Tiberi performing The Modern Electric’s As Sharp As Knives — a perfect way to wrap up the night. The spring Coffee House did not disappoint and, as always inspired younger audience members to participate in the future. This bodes well for the Coffee Houses to come. Looking forward, we cannot wait for plenty more breathtaking Coffee Houses . . . or can we!

Although the Coffee House is one of BH’s most cherished events, the popularity of the Coffee House has steadily decreased over the past few years.  At its peak, the Coffee House possessed many talented acts of all varieties. There would be a variety of different musicians, who perfected each of their pieces, playing in accord with perfect harmony.  Looking towards the present, the quality of each piece remains intact; however, the number of musicians has severely declined. Every year, there have been fewer and fewer musicians willing to participate. This may be a consequence of Belmont Hill’s rigorous academic and athletic investment.  With the musically talented senior class graduating, the Coffee House may be in jeopardy of disappearing. Many throughout the Belmont Hill community would love to see the Coffee House continue; however, many people would have to participate in the future. With a multitude of enthusiastic musicians and viewers, the Coffee House should continue to be prosperous.  Although we wait for many more Coffee Houses, the future of the glamorous event relies on the student body’s desires to participate.