From Broadway to Belmont – “Hamilton” Performed in Hamilton Chapel

From Broadway to Belmont – “Hamilton” Performed in Hamilton Chapel 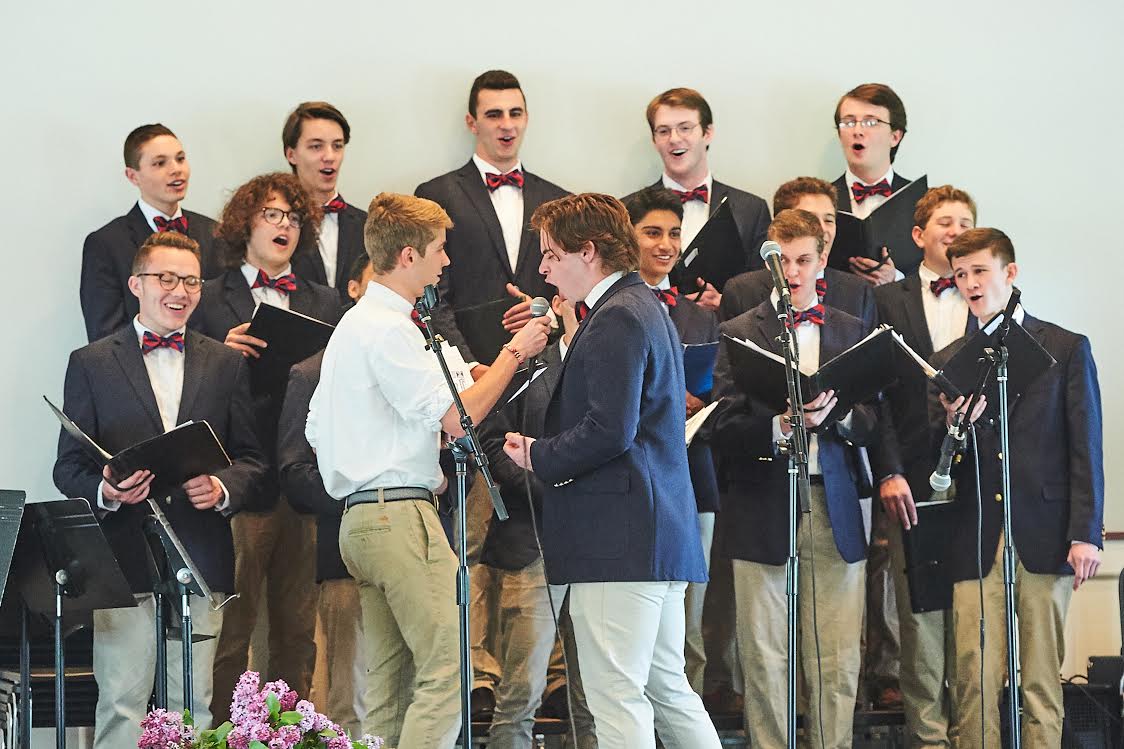 On the afternoon of Sunday, May 7th, five student music groups convened in the Hamilton Chapel for the 2017 installation of Belmont Hill’s Spring Concert. Entertained by an hour and a half of instrumentals and vocals, parents, other Belmont residents, faculty members, their families, and other students enjoyed a beautiful afternoon of music and melody.

Performing an innovative spin on Bruno Mars’s pop hit “Treasure,” the Middle School Jazz Ensemble began the concert, their strong performance bolstered by solos from Artemy Ivanov ‘20 on the alto saxophone and Kevin Jiang ‘22 on the clarinet. Subsequently, The Upper School Jazz Combo, sporting white shirts and sharp blue ties, took the stage to perform two tunes. “All of Me,” a classic jazz piece, was played first by the group’s core sixth form members: Brian Tanabe’ 17 on the tenor saxophone, McAlister Perry ‘17 on guitar, Armin Thomas ‘17 on the piano, Marshall Knight ‘17 on the alto saxophone, and group president Scott Jackson ‘17 on drums. Knight soloed on the song, smoothly commanding his alto sax. The group welcomed B-Flats member Seamus Clair ‘17 to provide vocals for their second song, “Cold Sweat,” a groovy James Brown tune; Clair surprised the audience with an impressive rendition.

Sampling a wide variety of musical genres, Belmont Hill’s B-Flats performed third. The group began by singing “True Colors,” Cyndi Lauper’s famous 1986 hit that has been readapted several times, most recently by Justin Timberlake and Anna Kendrick on Disney’s Trolls. Solos from Varun Shah ‘17 and Philip Bailey ‘17 preceded a duet performed by Theo Why ‘18 and Seamus Clair ‘17. Following “True Colors,” the group sang “Au Joli Jeu,” a traditional French love song, “Blue Ain’t Your Color,” for which Bennett Rush ‘17 soloed, and “Good News,” an exciting spiritual hymn. Fifth on their tracklist was “Lord of All,” a rousing gospel jam that Mr. Patterson had taught to a group of independent school students at Groton’s annual Gospelfest in April. Jacob Whitney ‘17 played the role of exhorter, leading a call-response routine among the B-Flats. The B-Flats’ final set of music, selections from Lin-Manuel Miranda’s “Hamilton: An American Musical,” was arguably the most anticipated component of the Spring Concert. Popular with both the audience and members of the B-Flats themselves, songs performed from “Hamilton” included the play’s introduction, “Alexander Hamilton,” Aaron Burr’s “Wait for It,” King George III’s “You’ll Be Back,” and Alexander Hamilton’s, “My Shot.” Peter Knowlton ‘17 sang Burr’s emotional soliloquy on “Wait for It,” while Ben London ‘17, Sebastian Themelis ‘17, and Philip Bailey ‘17 sang an assortment of roles on “Alexander Hamilton.” Theo Why ‘18 beautifully executed “You’ll Be Back,” a song that demanded strong, steady vocals and individual poise, while Owen Pickette ‘18 admirably handled Lin-Manuel Miranda’s very difficult rap on “My Shot.” Meanwhile, the chorus complemented soloists nicely, especially during “My Shot,” in which other members of the B-Flats belted out a resounding “AL-EX-AN-D-ER-WE ARE-MEANT TO BE,” to accompany Pickette’s rap. Strong vocals were supplemented by Mr. Patterson’s rendition of Hamilton’s melody on the keyboard, Marshall Knight ‘17 on guitar, Scott Jackson ‘17 on drums, and Armin Thomas ‘17 on the timpani, a special percussion instrument donated by Frank Epstein.

The Orchestra ended the concert. A medley from the Pirates of the Caribbean, a piece violinist Andrew Kaneb ‘17 had been waiting his entire Belmont Hill career to play, pleasantly stunned the engrossed audience, the song’s ferocious undertone providing a backdrop to the piece’s subtle individual melodies. Kaneb and Austin Kwoun ‘18 performed incredibly, each on the violin.

The Spring Concert also served as the last performance for many graduating seniors. Although some, like Armin Thomas ‘17 and members of the B-Flats, would perform again in Chapel and at the Senior Talent Show, many ended their Belmont Hill music careers that Sunday afternoon. The Spring Concert represented the perfect culmination of their efforts and talents.