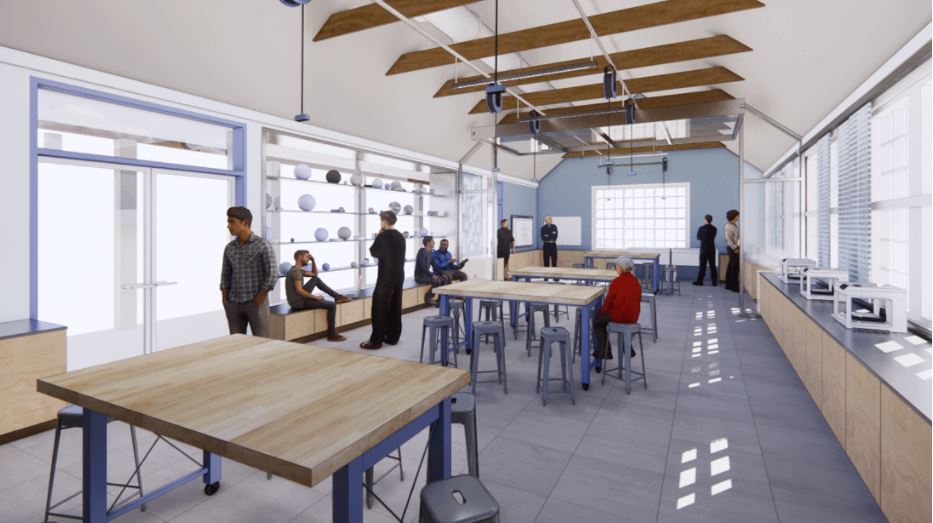 Belmont Hill will embark on an exciting project in which the Bolles House, currently serving as the main office, will be transformed into the school’s new makerspace. The Bolles Makerspace is planned to be completed before the start of the next school year.

Driven by their vision to develop the school’s STEAM (Science, Technology, Engineering, Arts, and Math) program and long-term master planning process, the Belmont Hill Board crafted a plan to create a space to achieve these visions. And with administrative offices moved to Howe House after Mr. Schneider’s family moved across the street, the Bolles House was available to serve as the backbones for the new makerspace. Though the newly available space came this year, the planning process began with the trustees before Mr. Schneider’s arrival. They worked with an outside group who worked on Belmont Hill’s master plan as well. Mr. Schneider, in his first year at Belmont Hill, had the opportunity to visit similar spaces designed by the group in nearby areas. Though aware of the similar spaces at other schools, Belmont Hill desired a space ingrained with Belmont Hill’s culture and suited to the learning practices for its students. And so, with Mr. Schneider’s arrival, the process of incorporating this space began.

The Bolles Makerspace has a bright future ahead. The space will be under the guidance of Mr. Ziff, the Director of Makerspace. Mr. Ziff “has a deep background in running the related equipment as well as robotics work.” As the director, Mr. Ziff will “help facilitate new faculty ideas while also making connections with our [Belmont Hill’s] boys who really love to make things.” Knowing that “people are always more important than spaces” from experience, Mr. Schneider is excited about the addition of Mr. Ziff. He is looking forward to having “someone with his skills and energy coming to campus next year.” More information regarding Mr. Ziff can be found on the school’s website, in which he outlines his background and visions in more detail.

The new makerspace will provide many exciting opportunities with its central location near Robsham. When asked about what he was excited about the makerspace, Mr. Schneider responded that “I am most looking forward to seeing what our boys want to do with this new opportunity.” A space designed with flexibility, the Bolles Makerspace will provide many opportunities for students to lead the direction of their interests and show leadership. The space will host many new projects that will add to Belmont Hill’s tradition of panels, boat building, and toboggans in the woodshop. Additionally, the green screen and podcasting rooms there will allow students to express their creativity in other ways.

Belmont Hill has strived to further its depth in all fields with its dedication to investing in projects like the Bolles Makerspace. To end his description of the makerspace, Mr. Schneider said, “I suspect this will take some patience and flexibility, but I have no doubt that this new program will add great vibrancy to school life over time.”