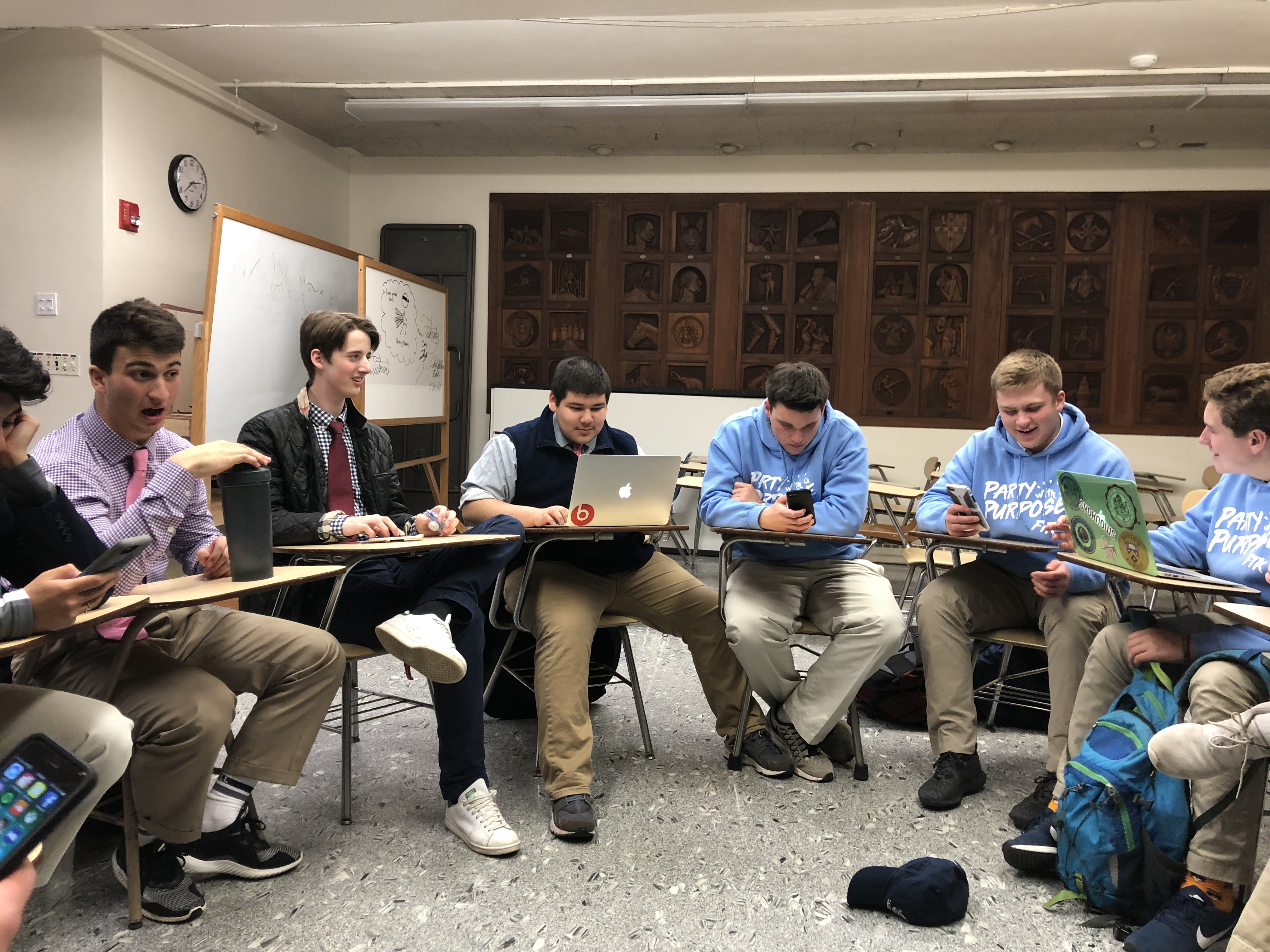 On February 7th, 2018, Fifth Former Shane Rockett began a movement. “Junto,” a club meeting each Thursday at 2:15, welcomes all upper schoolers to the chapel basement, where, free of faculty supervision, they discuss a truly vast range of intellectually stimulating topics.

In a recent interview, I had the privilege of sitting down with our soon-to-be President of the School to hear him speak about his tremendously successful innovation. Before long, it became clear that Shane owns a genuine passion for Belmont Hill’s Junto as his zeal is on full display for all who participate in the meetings’ spirited discussions.

When asked about his motivation in spearheading the club’s creation, Shane delivered a thoughtful response, referencing iterations of Junto dating as far back as the 18th century:  “I read the unfinished autobiography of Benjamin Franklin and it was excellent. He was the type of guy where knowledge was his lifeblood. He had a hunger for knowledge such that whatever he was doing he would try to be learning. He was constantly reading.”

“By the time he was in his early twenties, he already owned one of the largest printing shops in Philadelphia. With his great success, he started getting clout around the Philadelphia area, which he used to create a club that he called ‘the Junto.’” Comparing Benjamin Franklin’s Junto to Belmont Hill’s own, Shane revealed,  “It was a lot smaller than our Junto here at Belmont Hill … What is was was a book club for philosophy. They would write essays. They would write poems. The essence of Junto, at least in Franklin’s time, came from the name Junto itself, coming from the Latin word junctus, meaning together. It was a union of minds.”

Among other intriguing features, the chapel basement serves as Junto’s regular meeting location, turning heads and raising eyebrows all across the student body. To the club’s founder, however, the chapel basement makes perfect sense: “The chapel basement is a very intimate setting. Privacy, I think, is part of it. It gives the members of Junto comfort and helps them know that they can share whatever they want. The chapel basement is also a place of very great historical significance in the scheme of Belmont Hill. The panels, which I think date all the way back to ‘23, are a great source of inspiration.”

I myself have attended two Junto meetings, and I offer wholehearted advocacy for the club. Each meeting featured a fascinating series of debates, including: “Is human life sacred?” “Is animal life sacred?” “Should Massachusetts make use of the death penalty?” and finally “Which panel do you least like?” The club has also discussed potential changes or adjustments Belmont Hill could make, such as the addition of a Student Center. I could not pass up the opportunity to find out Shane’s favorite topic, and he did not disappoint: “My favorite discussion all year I think was, ‘Is human life sacred,’ I think we went very deep on that one and everyone really shared something valuable. That’s what it’s all about, we want everyone to be sharing something valuable and moving towards enlightenment.”

For those of you who had doubts about the club’s longevity, take a deep breath. When asked whether he will continue to lead Junto into his senior year, Shane declared, “Absolutely. 100%. I hope as well that more younger students would consider joining.” However, even as Junto progresses, spontaneity will continue to be a key element of the club’s future: “Junto is an interesting club in the sense that we have no agenda until the meeting itself begins, so there is no need to secure a room or anything like that. The club is its members, and it’s not greater than its members, and so, as far as plans for the future, I only hope that more people will become interested and that the younger grades learn to appreciate it.”

To conclude our interview, I asked Shane what he believes Junto adds to the Belmont Hill community, and the overwhelming response was that Junto offers a place of freedom: “I believe Junto adds to the Belmont Hill community a place free of adult supervision for students to speak their minds in the truest sense, but also a place free of judgement from other students who might not be interested in the same things, where students can learn about themselves … to learn about the world, and to share their knowledge, like Benjamin Franklin.”