The 2018 Senior Prank, Its Storied Past, and Its Shaky Future

The 2018 Senior Prank, Its Storied Past, and Its Shaky Future 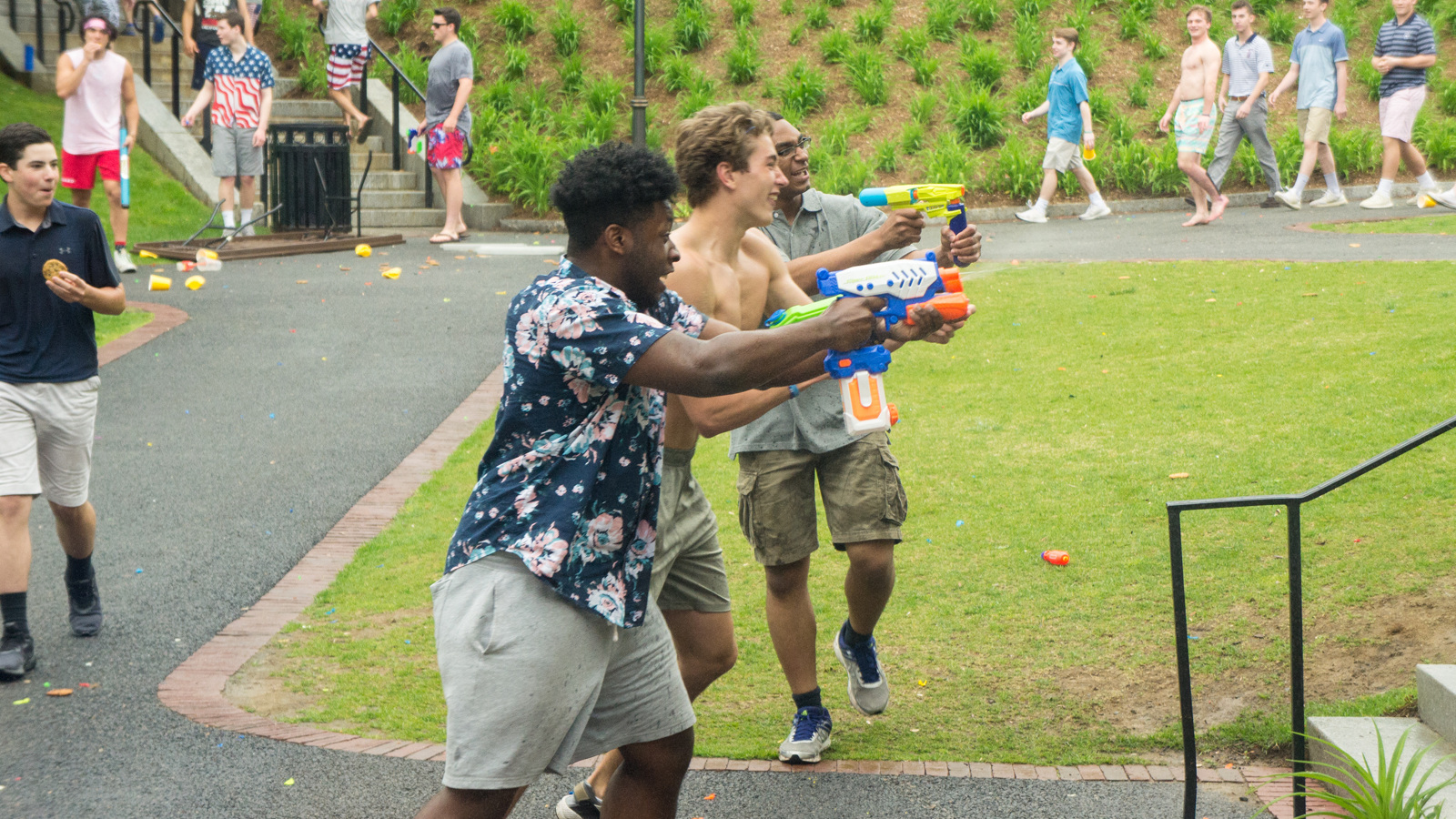 On Tuesday, May 22, the Class of 2018 brought light into an otherwise gloomy and dismal day with their senior prank. Seizing on the trend of the past few years towards water-related pranks, the soon-to-be graduating seniors descended upon the campus with an assortment of water guns, buckets, and water balloons. As has become customary for the annual senior prank, they waited until the 15-minute milk and cookies period to strike. Having moved the milk and cookies into the center of the quad, they rained down watery fury upon their victims, from innocent first formers hurriedly trying to get to class and avoid getting wet to juniors looking to blow off steam and join in the fun and mischief. At the height of the prank’s antics, some students began to hurl milk cartons and cookies, for which they were swiftly reprimanded by teachers, and seniors even filled their water guns with milk and hosed their unsuspecting targets. After the milk and cookies period had concluded and the sopping wet students from the younger grades had sat for their next class, the seniors concluded their prank day festivities with a makeshift slip-and-slide along with the most dreaded part of the day: cleanup. As the seniors begrudgingly picked up soggy cookies and the shells of popped water balloons, they brought a close to another successful senior prank day, one which will surely be remembered by the Belmont Hill community in years to come.

Through memorable, the senior prank day of 2018 is by no means the first of its kind, but rather the latest in a long line of jovial and light-hearted springtime tradition. According to Mr. Prenatt, an expert on the history of the Belmont Hill school, the origins of the senior prank can be traced all the way back to the 1960’s. In the 1960’s, the seniors observed “Esquire Day” on the final day of spring by skipping their classes and showing up to school in costume. During Esquire Day, the seniors would play informal sports and perform “street theatre.” Over time, as Equire Day morphed into “Senior Skip Day,” the need for a new on-campus senior tradition emerged, resulting in the introduction of pranks to Belmont Hill in 1980’s.

After its debut in school life, the senior prank became a significant and virtually unshakeable part of the Belmont Hill culture. As each year’s senior class sought to outdo the previous year’s high jinks, some truly remarkable feats tricks were inspired. Among the pranks which Mr. Prenatt, Mr. Armstrong, and Mr. Bradley have witnessed over the course of their cumulative decades at Belmont Hill, their long list of favorites includes spreading Dixie cups filled with water over the floor in Morse, filling Goodband Commons with balloons, cramming Mr. Goodband’s office with crumpled newspaper, taking furniture from the Morse and the old Howe buildings and stacking them on the lawn, and blocking the then-single-lane driveway to the Science Building with cars. As Mr. Prenatt puts it, “People tend to respond favorably if the pranks are innovative and have shown imagination, effort, and an element of surprise.” Pushed by the same drive to create bigger and better pranks, however, some seniors classes have seriously crossed the line. In particular, Belmont Hill community members vehemently disapproved of seniors driving the Zamboni down to Belmont Hill center, confiscating middle schoolers’ backpacks, and even creating blockage on Route 2. Mr. Prenatt summarizes, “Disapproval rises when there is personal injury, damage to property, mass inconvenience and annoyance, unfunny personal attacks on individual faculty members, or potential threats to public safety.” In response to these fiascos, the Belmont Hill administration reasonably decided that future senior pranks would be subject to approval. And, while many have blamed this policy change for the perceived decline of the senior prank, it can be argued that a perpetual lack of creativity and initiative from the senior class has precipitated that fall.

In the past five years at Belmont Hill, it seems every senior prank has centered around a water fight. While some classes also grease door handles and railings with vaseline and others use the school-wide monitors to make Fortnite references, their premises remain constant at their core, much to the chagrin of excited and expectant younger classmen; however, as those same younger classmen become seniors, they too find themselves with water gun in hand, leaving many asking why. The answer, unsurprisingly, stems from a desire to avoid trouble and work. A water fight is a shoo-in for approval and a relatively easy mess to clean up since water, as everyone knows, evaporates. Thus, it is very appealing to seniors enjoying their long-awaited spring hiatus from work. Plus, who doesn’t love a good water fight, especially when you get the chance to markedly state your dominance over underclassmen? Because of a cumulation of these factors, however, the senior pranks risks being lulled into a state of repetition and complacency. And, for many, that may be fine. But for those dissatisfied with the current quality of the senior prank, remember, it takes less than a forty year jump to the past to find your next inspiration.