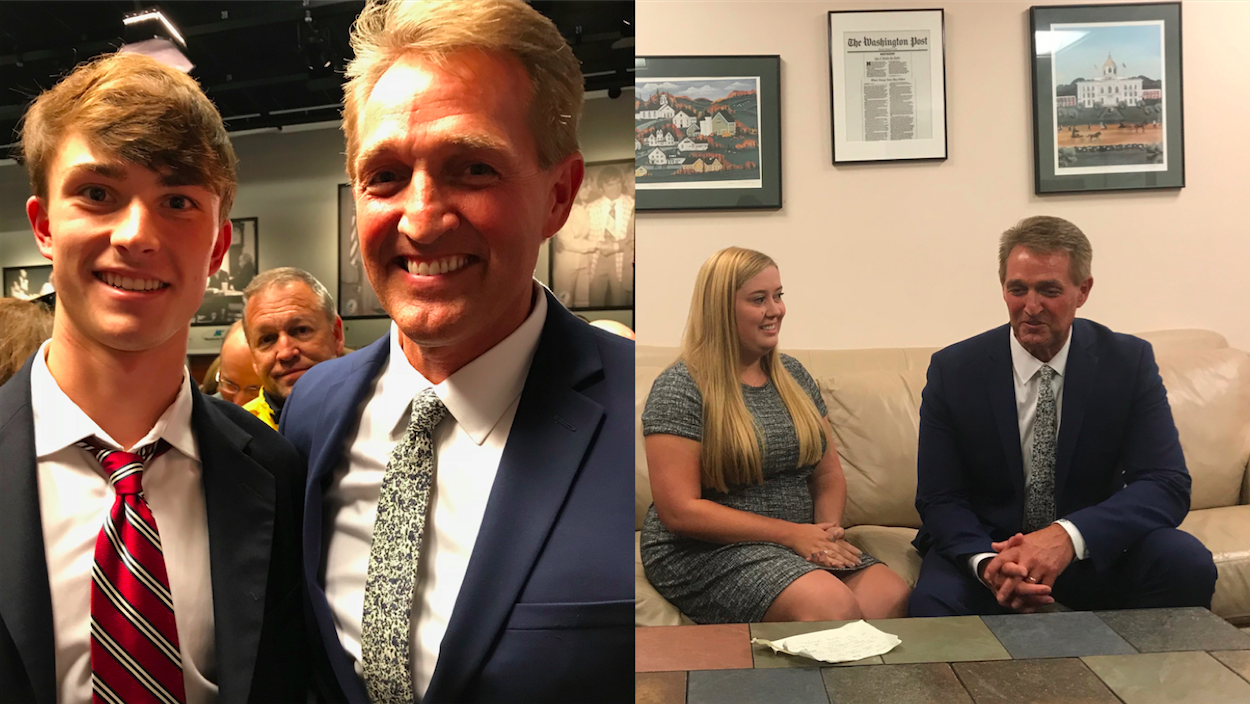 “After the Deluge,” an ironic speech title for Senator Jeff Flake (R-AZ), as the roof of the New Hampshire Institute for Politics (NHIOP) rattled in the night. Through this actual deluge, the hordes of protesters and satellite trucks remained, cemented in the cold, as I entered the building. A feeling of anticipation and excitement filled the air, inside the building. A group of men from one of the major news outlets commented on how people weren’t acting like this was a speech from a lame-duck senator but rather a glimpse of the first Presidential Primary run of the 2020 election. As the auditorium filled this feeling became almost palpable.

Senator Flake’s first words took many by surprise. There was a hushed tone to his voice, that was only accompanied by the continual beat of the rain above our heads. He spoke of his childhood, growing up in a small town called Snowflake, AZ. How he saw Reagan preach of our “city upon a hill.” How he grew up in a time where he could believe in a set of true conservative values. Flake then reflected about how we have changed, as a country: the growing animosity towards each other. the rejection of common sense and basic principles of decency by politicians for minor partisan victories. He pleaded, “Decency shouldn’t be that hard.” This is not the world Reagan had envisioned.

Throughout the speech, Flake came back to the same conclusion. We are living in a tribal society and our political beliefs have become the epicenter for the expression of tribalism. Considering conservative backlash for his previous bipartisan efforts and recent actions within the Senator Judiciary committee, Senator Flake says, “I had failed my tribe, (and) I hope to continue to fail my tribe.” This departure from the grips of the RNC and the DCCC, which are both shifting in opposite directions, is what Americans deserve. Political isolationism has caused a mass shift in political party ideology as well as created an environment in which legislation is almost impossible to pass with wide support. As a point of context, the 80th United States Congress, which Truman historically called the “do nothing Congress” because of their inability to pass legislation, passed 900 bills. Our current Congress, the 115th United States Congress, has passed 901 bills. The road to mediocrity is paved with tribalism. Towards the end of the speech, Senator Flake exclaims, “Tribalism should be punished at the ballot box!” But, sadly, it isn’t. Jeff Flake will not be seeking a second term as Senator, and tribalism is clinching in greatest victory yet.

Once the rows of people have filed out of the auditorium, I went with Senator Flake into the “Ethics Room” at NHIOP. After a short interview, I asked him, “What was going through your mind the first time you voted.” He quickly responded, “The time I voted was for Ronald Reagan and that was an easy vote to cast. He was inspiring and he got you excited about politics. ‘Morning in America.’ There was American exceptionalism and leadership around the world. It felt a little better that way, you weren’t voting against somebody, you were voting for somebody.” For there will be a time, when the rain subsides, where decency will shine down again. A time when principal supersedes partisanship. A time where “failing the tribe” is seen as a universal goal. A time where we will return to that city upon a hill.